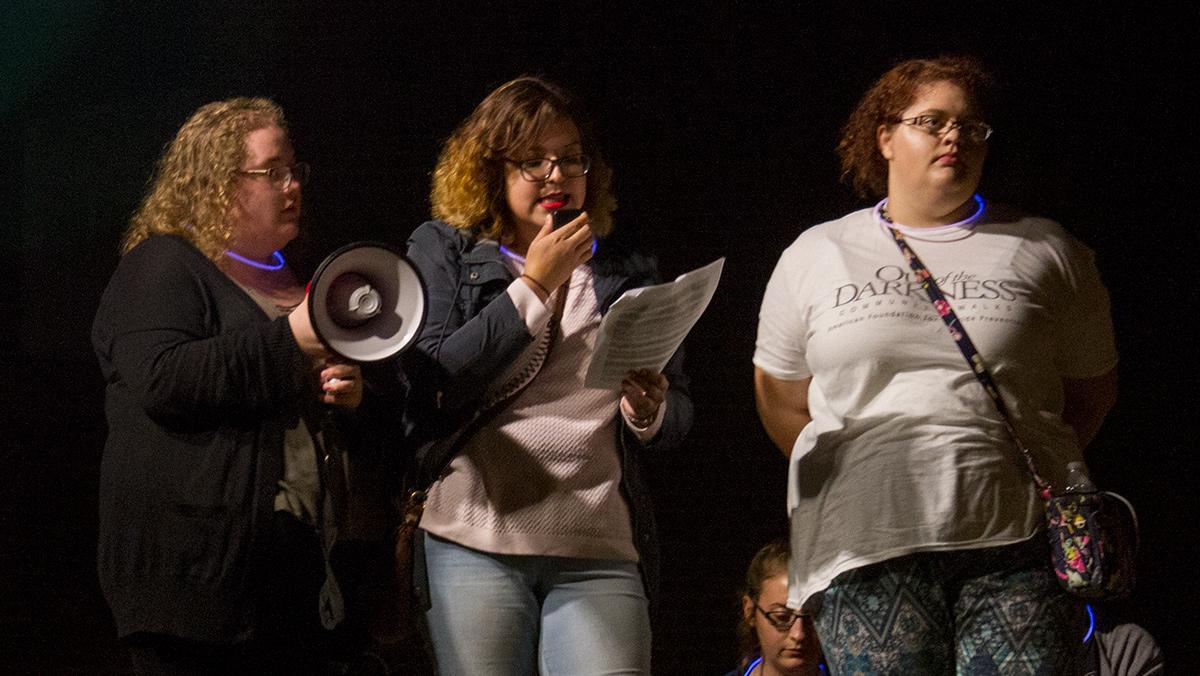 In the area surrounding the Free Speech Rock, 1,100 white paper bags filled with sand and glow sticks covered the grass. They represented the number of college students who commit suicide every year, each bag adorned with inspirational phrases like “stay strong” and “stomp the stigma,” meant to inspire those reading them to do something about the silence surrounding mental illness.

More than 70 people gathered at 7:30 p.m. on Oct. 3 at the Free Speech Rock for a “moment of action” to discuss ways to increase dialogue around issues of mental health. In honor of the end of National Suicide Prevention Month, Active Minds, a national group of 400 campus chapters, with one at the college, have been hosting events like this across the country to address the stigma that surrounds mental illness on college campuses.

At the vigil, the IC Active Minds executive board stressed that this event was part of its overall effort in trying to increase awareness for the communities that are touched by mental illness. The purpose of the event, according to executive board members, was to emphasize how large of an issue mental health is at the college and at colleges across the nation.

During the event, members of Active Minds spoke to the crowd about their mission and what kind of help they offer. They also assured the crowd that the vigil was a safe space for discussing mental health.

Co-president Molly Robbins talked about how Active Minds attempts to help those with mental health problems who might not normally seek help. She said one of the main things that Active Minds tries to accomplish through its organization is getting students to actually talk about their problems.

“We’re not a support group,” Robbins said. “We’re not there to be the mental health support system for students. We’re not licensed in any way to do that, but being around students who talk about that is helpful for people, especially in a stigmatized context.”

Sophomore Glenni Rodriguez Santos said she came down from Towers to see what was happening at the event and came away from it knowing more about the group’s purpose. She said she plans to attend Active Minds meetings in the future.

During the vigil, Active Minds members thanked several groups that have made an effort to help with student mental health at the college — from Spectrum, a group that helps students learn more about the bisexual community, to other Lesbian Gay Bisexual and Transgender groups, and Counseling and Psychological Services.

Senior A.C. Tierney is a co-chair of Speak Your Mind — a panel sponsored by IC Active Minds that allows students to share their stories about their experiences with mental health and answer anonymous questions. At the event, Tierney spoke about the shortcomings of CAPS. She said that while the organization helps students, they still lack resources.

“We currently only have one counselor for every 700–800 students at Ithaca College,” Tierney said. “This is a resource that has proved invaluable to the majority of students who have struggled with mental health during their time on this campus.”

Sophomore Maddy Horowitz, another Speak Your Mind co-chair, said CAPS is in dire need of support.

“If you are put on a wait-list for two weeks, you kind of just have to suck it up or go to group therapy, and that’s just how it works,” Horowitz said “CAPS is doing literally everything they can to get you in some sort of therapeutic environment.”

Following the event, one of the goals Alexandria Lopez, co-president of Active Minds, said she wants to get more organizations involved in the issue of student mental health.

One year later, some concerns remain about CAPS

Between classes and extracurricular activities, self-care isn’t always an issue at the forefront of college students’ lives.