Activist speaks on intersectionality in activism 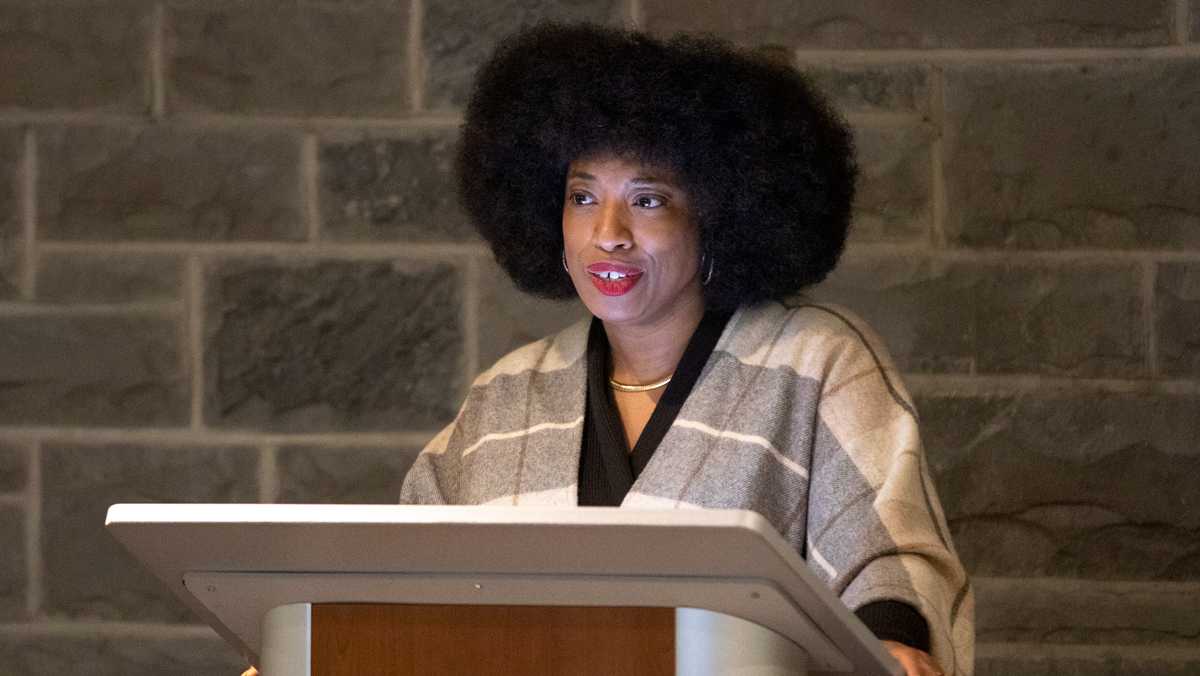 Molly Bailot/The Ithacan
As a black Jewish woman, Yavilah McCoy said, her intersectional identity has forced her to deal with multiple kinds of oppression throughout her life. McCoy said she aims to avoid divisiveness in social justice.
By Cora Payne — Assistant News Editor
Published: February 19, 2020

In the words of guest speaker Yavilah McCoy, the best way to counteract injustice in society is through love. McCoy, an educator, anti-racism activist and diversity, equity and inclusion consultant, visited Ithaca College on Feb. 18 to speak about intersectionality and activism.

The Office of Religious and Spiritual Life, the Center for Inclusion, Diversity, Equity and Social Change and Hillel at Ithaca College co-sponsored McCoy’s visit as part of Better Together Days, a program created by Interfaith Youth Core (IFYC) meant to bring campuses together for a week of interfaith discussion. McCoy spoke in the Klingenstein Lounge in the Campus Center to a room of approximately 60 people.

As a black Jewish woman, McCoy said, her intersectional identity has forced her to deal with multiple kinds of oppression throughout her life. McCoy said she aims to avoid divisiveness in social justice.

“Rugged individualism gets you real good at driving your own car and just knowing how to cruise in your own lane,” McCoy said. “Yet when it comes to social justice, [you are] not lifting up your eyes and noticing that we’re all gonna get to a common traffic light. A traffic light that is red.”

Hierald Osorto, director of religious and spiritual life at Ithaca College, said that McCoy was specifically selected to speak at the college because of her intersectional message. Osorto said the time is right on the college’s campus for McCoy’s message.

“We wanted to help IC see themselves as their full self with all their identities,” Osorto said. “McCoy serves as a national voice that models that in a lot of ways.”

A key element of activism is understanding and forgiveness, McCoy said.

“How are we going to get over this chasm we’re in right now where we’re separated from one another if we don’t take the risk of investing from a place of love?” McCoy said. “The reason why I’m an activist is because I’m so deeply in love with the humanity of all people that I must fight for their liberation even though I don’t know all of them.”

McCoy said that often, advocacy is presented in ways that keep people comfortable. She said that often, people only talk about racism, sexism and homophobia through frames that please everyone, a practice that is problematic.

“You always have to say things in a way that doesn’t make people angry, or worse, show yourself as angry, because then you may lose support,” McCoy said. “We are told there is a cost for calling people out. …  We are told that the need to change must function only in a way that keeps people feeling as if they are not the ones who are tasked with making that change.”

Freshman Kyle Friedman said he thinks attending events and watching speakers like McCoy has led to valuable conversation amongst him and his friends.

“Whenever my friends and I meet up for lunch, we have these discussions,” Friedman said. “This type of progressive, feminist, equality-focused speaking is a different type of conversation than anything I’ve ever had before.”

McCoy shared an analogy about finding a seat on a subway. McCoy said she observed that women felt compelled to take up very little space, even when surrounded by men who spread their bodies across several seats, otherwise known as manspreading. McCoy said the situation is representative of social justice concerns and relations between marginalized and nonmarginalized groups.

“One side is taking up so much space, and they are failing to ask, ‘Who is being left with less space?’” McCoy said.

Friedman said the compassion and understanding in McCoy’s speech made it accessible and personal.

“Why can’t we all be the person that’s watching to make sure everyone is okay?” Friedman said.