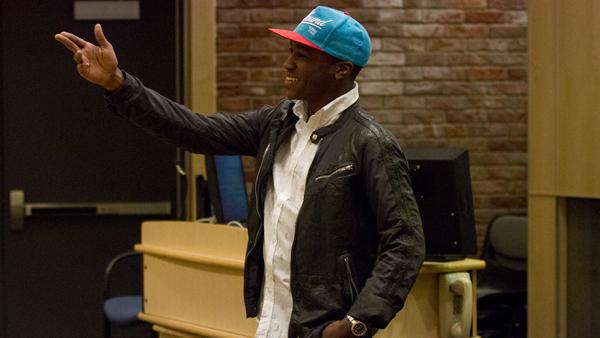 The first Africa Week: Back to the Roots event, hosted by the African Students Association, is celebrating African culture with events to break the stereotypes of Africa that inundate American media.

Through film screenings, discussions and music, Africa Week is meant to help students at Ithaca College become more aware about the social, cultural and political aspects of Africa.

Junior Tafadzwa Violet Senderai, a Zimbabwean and vice president of ASA, said there are five pillars of Africa Week that outline the ASA’s goals.

“All of our events will help tap into our mission of cultural, political, educational, social and media awareness,” Senderai said. “So we want to relish cultural elements of Africa, exploring that, exhibiting them to everyone else.”

Africa Week began Monday with a presentation by guest speaker M.K. Asante, Jr., a best-selling author and award-winning filmmaker, who spoke about eliminating stereotypes toward African and African-American culture through Western media.

“We took it for granted almost … We didn’t understand that what [my father] was doing was really beautiful, and he was trying to make that connection.”

Asante said the only part of African history mentioned in-depth in American schools is the slave trade. He said this is one of the reasons why many African-Americans feel insecure about their African heritage.

“They didn’t teach us that the pyramids were completed before Greece and Rome were conceptualized,” Asante said in his poem “Two Sets of Notes.” “Can it be any clearer? Black students look in the mirror. You are a reflection of divinity. Don’t let them fool you with selective memory.”

Freshman Natasha Kirabo, who is from Southern Uganda, said Uganda is a country with beautiful landscapes, a flourishing economy and organic food, not a war-torn slum like American media often show.

“It’s like two worlds,” Kirabo said. “One thing that really struck me was that when I was back home, everything like CNN and BBC, all they would show is the bad side of Africa.”

Sophomore Steven Kobby Lartey, the public relations chair of ASA and a Ghanaian, said the purpose of Africa Week is to destroy the preconceived notions of Africa that the media propagates and encourage respectful discourse about the many countries and cultures of Africa.

Lartey said Africa Week will be coming back next year and hopefully for years to come.

“We want it to be a culture of respect, ensuring the dignity of the African,” Lartey said. “We would like to celebrate ourselves and our ancestors and cultures with folks here at IC, because we believe in community.”