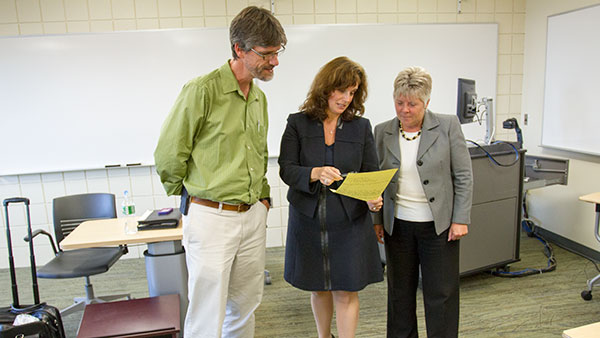 A consultant from the Association of Governing Boards Search visited Ithaca College Sept. 8–9 to collect feedback from faculty, students and the campus community about the qualities they seek in the next provost and vice president for educational affairs.

In addition, President Tom Rochon announced Sept. 4 that the Provost Search Committee, which comprises six faculty members, four staff members and one student, has been finalized. Luke Keller, professor and chair of physics and astronomy, and Nancy Pringle, vice president and general counsel, serve as the committee co-chairs.

Rochon said he solicited nominations from the executive committees of the Faculty and Staff Councils as well as the Student Government Association, and he decided to add one more staff and faculty member than originally planned in order to capture a wider range of opinions.

Pringle said Rochon asked the SGA Executive Board to submit nominations, and he selected senior Ayesha Patel to serve on the committee.

Keller said the search committee contains a mixture of both newer and more experienced campus members as well as fairness in gender, demographic and school representation.

The consistent attribute among the committee members is a working knowledge of the responsibilities of the provost, he said.

This current provost search differs from the previous search because two years ago, during Kelly’s tenure, her job title grew to encompass student affairs in addition to academic affairs, which resulted in the current title of educational affairs, Rochon said.

Given the nature of the job description — integrating student and academic affairs — Pringle said the college is looking for a new provost to further the implementation of IC 20/20, interdisciplinary programs and clear communication between the administration and the student body.

Keller said this combination of student and academic affairs is fairly rareamong institutions.

“That might really appeal to some candidates, and some candidates might not be used to it,” he said. “I think this is going to be a very attractive position for which to recruit.”

Keller said Rochon asked Pringle and him to co-chair early in the summer, but Keller and Pringle were not involved in the process of identifying the candidates for the committee.

“You need a group that can work well together but also one that there has been some process that people trust for how they were selected,” Keller said.

Keller said at the first official meeting of the Provost Search Committee on Sept. 24, AGB Search Consultant Julie Tea will present a draft job advertisement based on the input she received this week from the campus community. He said the committee will finalize the job description document at the meeting, and then Tea will open the search for a permanent provost.

“She and her colleagues are plugged into the whole job market for academic administration, so she knows a lot of people and has a big network,” Keller said.

The search process will be a private affair at first, out of consideration for high-profile academic officials who do not wish to reveal their searches for other positions, Keller said. After the committee narrows down the candidate pool, he said, the final three or four candidates will visit the college at the end of November or early December for in-person interviews. He said the goal is for a final decision to be made by winter break.

Tea said the provost-elect may begin on a start date as early as January 2015 or as late as the summer.

“Our goal is simply to make the pace of the search aggressive to enable the possibility of a January start date if it suits the candidate of choice,” she said.

Aside from campus and faculty input sessions, Tea also held an input session Sept. 8 for students, but no students from the college attended. Keller said he was not discouraged by the lack of student participation because the student body is represented on the search committee.

“I am very excited that we have a student serving on the search committee, as is the tradition here, and the students are oftentimes the best possible ambassadors and most thoughtful committee members we can ask for,” he said.

Keller said student input on the process is important to the administration because many of the policies, like IC 20/20, are student-centered.

“The most important mission a college can have is to focus on students, student learning and student life and make those as positive as we can,” he said.