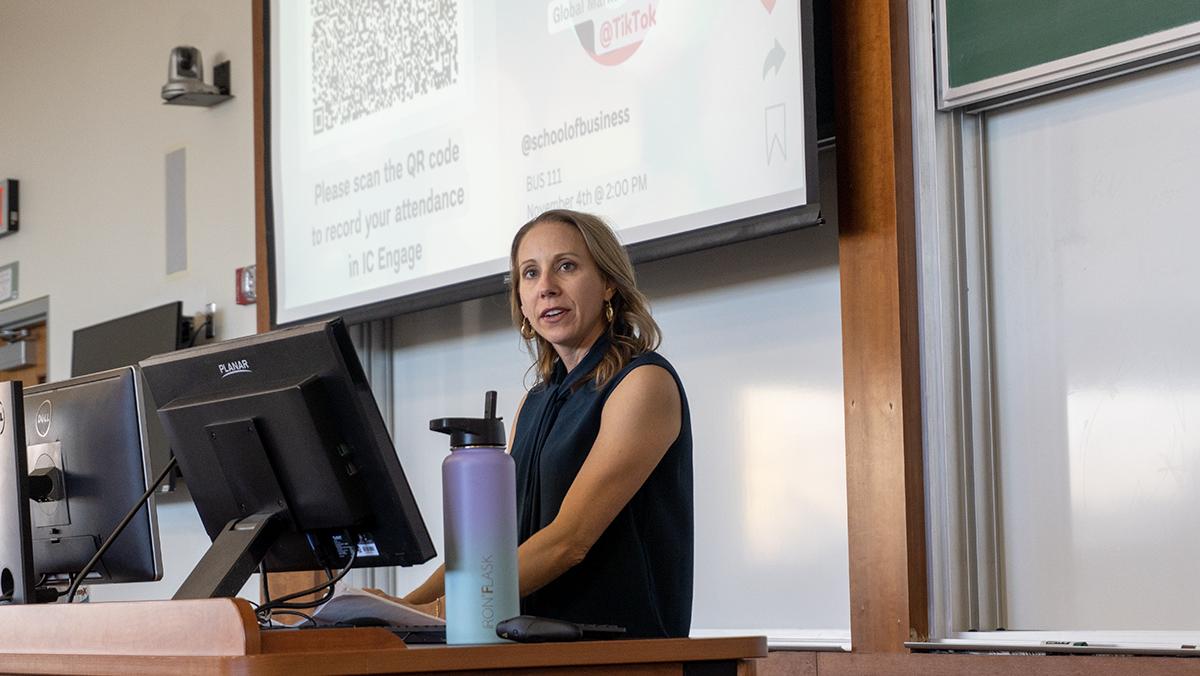 The Ithaca College School of Business, the college’s chapter of the American Marketing Association (ICAMA) and Office of Career Services (OCS) hosted Chris Patton ’04, the creative operations lead in global business marketing for TikTok, on Nov. 4 in the Park Center for Business and Sustainable Enterprise to give a talk on networking, forming good relationships and being open to mentorship for career advancement. Around 75 people attended the event.

Patton is a successful professional in marketing and project management. Her first major experience in the field was an internship while she was at the college with the advertising company Ogilvy, where she ended up working for three years. Other roles she has held include vice president of production at marketing agency Mr. Youth, director of production at brand innovation consultancy Redscout, and production and project manager consultant at Google. She has been working for TikTok in Global Marketing Operations since 2020.

Patton’s networking and relationship–building journey began as early as when she was applying for colleges. She said because she could not afford the college’s tuition, she took a bus to the college and scheduled meetings to convince college officials that she was worth investing in. She eventually received a grant and was able to attend the college. Patton said putting in the effort to engage with people also helped her in climbing the ladder at Ogilvy.

“I took every opportunity to meet as many people as I could,” Patton said. “So reaching out to people and asking them to take them to coffee. Anytime a senior leader would come and speak to the intern class, I would send them a thank you note afterwards, just looking for ways to connect with people and all of that extra work, because it is work, paid off because I was asked to interview for the Ogilvy associates program.”

In addition to networking and relationship building, Patton emphasized the importance of being a good listener and reacting positively to feedback and constructive criticism. She told the story of a friend of hers who gave a young person feedback on her presentation and instead of taking it in, she debated him, even though he was much more experienced.

“As a new employee, and this goes for all of you, and even me when I started out at TikTok after 18 years of experience at that point, when you enter your job, you have to listen and absorb,” Patton said. “It’s impossible to learn if you’re talking.”

Jonathan Chalmers, career engagement specialist for OCS, reiterated Patton’s advice and highlighted how beneficial and rewarding talking to and getting to know people can be.

“Surveys tell us that 85% of jobs filled are never posted and that networking is the key to tapping into that hidden job market,” Chalmers said. “I don’t think I can understate the value of building and maintaining relationships. If you go in with the mindset that it’s a reciprocal relationship — a two-way street — and focus on what you can do for them, not what they can do for you, you will be successful.”

Senior Trent Writer, president of ICAMA, stressed how students seeking to learn outside of the classroom and attending events like Patton’s can be very important for their success.

“When students break away from the classroom setting to stay curious about areas of interest, they gain the independence and experience to thrive in an ever-changing and culturally dynamic world,” Writer said. “Although hearing from one speaker is not the epitome of pedagogy in any given area, it is critical for students to get out of the classroom and hear different perspectives on the theories they are learning.”

Senior Abby Bergacs said she was particularly impressed by Patton’s story of needing a break from work. Patton said she was not in the right state of mind and had lost some of her drive, and despite straying from her path, she continued to have a successful career.

“She seems like a very work-driven person,” Bergacs said. “That seems like a really big part of her life, and she’s very successful, so for her to just kind of take a step back and be like, ‘I was not happy here; this is not what I wanted to be doing,’ and she just took a month off and did that and reevaluated. I think that’s a good lesson for everyone to learn because sometimes it is hard to be self-aware enough to realize that you’re in that spot.”

Bergacs said she was also impressed by Patton’s honesty regarding workplace relationships. Patton said even if someone is likable, there will always be people who dislike them. Patton said it is normal and part of cultivating a successful career for yourself is being able to deal with people who dislike you in a professional manner.

“It felt very real and raw and it was not like she was sugarcoating anything,” Bergacs said. “It makes me think that it is OK for you to know that there are people who do not like you and that is not really going to change because it is not so much of a reflection of you as it is them.”