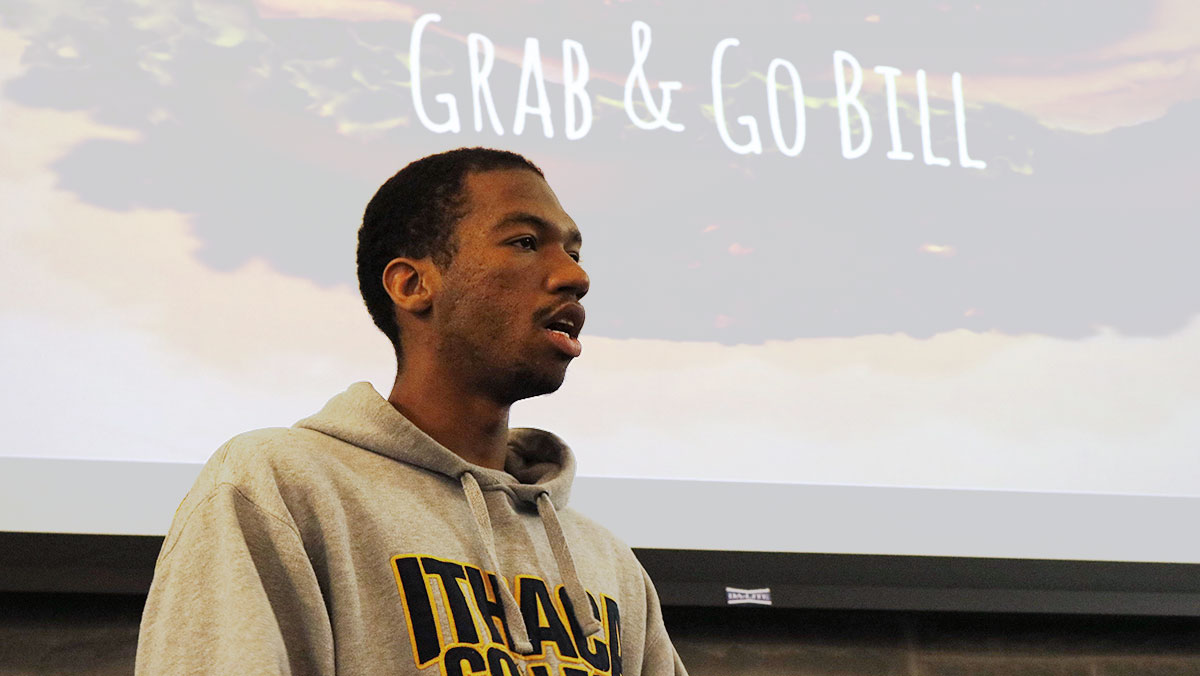 At the April 4 Student Government Association meeting, members of the Ithaca College student senate put forward three bills, two of which did not pass the proposal stage and the other of which was voted down.

The SGA has yet to pass more than one bill during the Spring 2016 semester as of the April 4 meeting, a drop from the nine bills passed in the fall semester.

At the April 4 meeting, SGA senators proposed three bills that were each criticized for providing insufficient research. Each bill was either tabled for a future meeting or voted down. The bills were prohibiting tobacco use on campus, expanding the location and hours of the Grab and Go Service, and the formation of a committee to negotiate more diverse options in the dining halls.

Proposed by Class of 2017 Sen. Tim Conners, “Tobacco Free IC” resolves to make the campus tobacco-free by the 2017–18 academic year. Conners said the tobacco-free bill is consistent with the college’s efforts toward environmental sustainability and community health, and would incentivize people to quit smoking.

“It’s not the idea that you’re attacking people for smoking. It’s just saying, ‘Here’s the trend, here’s the facts,’” Conners said. “People also have the right to not be infringed on by tobacco and the harmful impacts that has.”

The Senate voted 10–5 against the bill. Recckio said the bill didn’t resolve any clear line of action.

Class of 2016 Sen. Matilda Thornton-Clark said she didn’t support the bill because it did not include provisions to assist smokers in quitting.

“There was nothing in the bill about working with students who do smoke and want to quit,” she said. “It was all punitive. It was all about enforcement.”

Class of 2019 Sen. Thomas “TJ” Horgan said he didn’t trust the Office of Public Safety to fairly enforce the bill.

“Campus safety has proven themselves incapable to enforce these rules in a uniform and unbiased manner,” he said. “In my opinion, even allowing Public Safety to dictate who gets to smoke a cigarette, and for communities that have already been marginalized, allows for some very ugly consequences.”

Conners said the committee created by the bill would initiate enforcement and provide aid for campus community members looking to quit smoking.

The second bill, proposed by Class of 2018 Sen. Theophilus Alexander and International Sen. Attila Mendli, sought to add a location in the Campus Center for Grab and Go and extend its hours. The Senate unanimously voted to table the bill for the next week so Alexander and Mendli could solicit feedback from Sodexo and include more research in the bill.

The bill was criticized by Senator–at-Large Ezeka Allen for lacking research about the transitional issues the bill would pose for Sodexo.

“Logistically, like for employment, there are a lot of people at play — it’s not just the students,” she said.

Recckio said Alexander and Mendli could have raised the issues in the bill to the Food Service Advisory Committee.

“The research wasn’t in the bill. The bill only made a committee,” he said. “The Food Service Advisory Committee already exists, and students haven’t done enough of a job understanding how Sodexo and Ithaca College works.”

The third bill, proposed by Mendli, aimed to create a Sodexo Healthy Food Advising Committee that would address an alleged lack of vegan, vegetarian, organic and healthy options in the dining halls. The Senate voted in a 13–2 vote to table the bill for a future meeting so Mendli could solicit more information from Sodexo.

Senate Chair Marieme Foote said the stricter bill proposal process revealed flaws in proposals that would not have been caught in the old process.

“The Sodexo ones would have definitely passed a lot easier last year,” she said. “Now we’re looking for a lot more research, a lot more contact with people who work in those fields.”

Thornton-Clark said a lack of effective bill proposals at the meeting is because many of the senators are new and unaware of the demands of proposing a bill.

“I think a lot of the research involves talking with administrators on campus, and senators may be wary about that, or the administrators aren’t responding as much,” she said. “Also, they might not know that they need to do that to prove their bill is sufficient.”