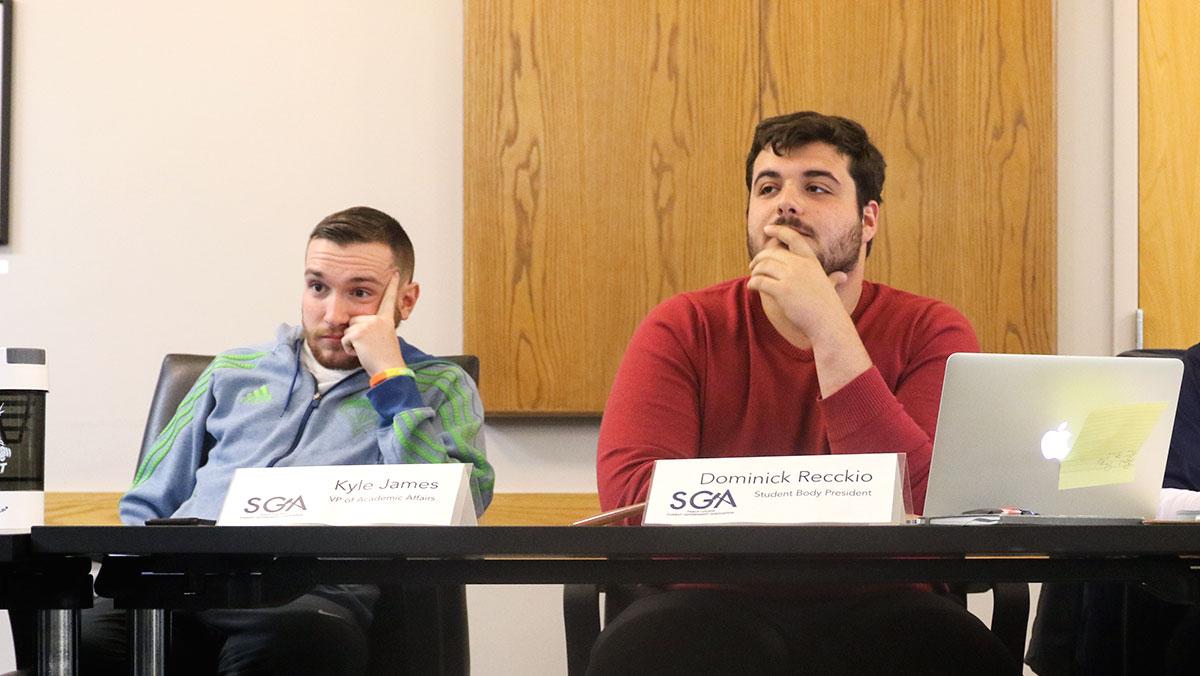 Ithaca College’s Student Government Association has seen a decrease in senate attendance and bill proposals during the spring semester.

Over the course of the semester, the SGA Senate has inducted seven new senators, raising the number of sitting senators from 11 to 18 of the 25 available seats. However, senate attendance has remained low, inhibiting SGA progress. Additionally, the number of bills passed has dropped from nine during the fall semester to one in the spring semester.

Because of low senate yields at the first two meetings of the semester, SGA President Dominick Recckio postponed the vote to induct senior Matilda Thornton-Clark to the vice president of campus affairs position for two consecutive meetings.

“To be transparent, the reason why we didn’t vote,  in my mind —  why we made the split decision to say ‘No, we’ll wait’ —  was I didn’t think we had enough senators,” Recckio said at the Feb. 1 meeting.

Since then, low sentate attendance has resulted in three meetings in which the SGA did not meet quorum —  a two-thirds senate attendance required by the constitution for any voting to occur —  compared to none in the fall semester.

Because seven senate seats were still vacant, the executive board planned to propose two senators at the March 7 meeting, but the SGA did not meet quorum; thus, the meeting could not be called to order, and the induction of the senators had to be deferred to later meetings.

The Senate voted to reduce quorum at the March 21 and 28 meetings in anticipation of senators’ leaving before the meetings were over. The constitution allows the Senate to vote to reduce it if enough senators are present at the beginning of the meeting.

After the March 28 meeting, when the Senate did not initially meet quorum for the third consecutive meeting, Recckio said he was frustrated by this semester’s Senate’s lack of involvement.

“I’d say this is one of the least engaged senates in years,” Recckio said.

Class of 2018 Sen. Theophilus Alexander said he thinks the decline in senate engagement is due to many senators’ putting more time into their academics and therefore missing meetings. In addition, Alexander, Recckio and Thornton-Clark said the young Senate may be hesitant to participate in the governing process.

“If a senator is new, they may be nervous or shy to even attend a meeting,” Thornton-Clark said. “I think senators see that there are no bills being proposed so they think, ‘Oh, this must not be an important meeting.’”

The SGA has passed one bill this semester — the open textbook bill —  compared to passing nine bills last semester, which included the PEACE bill, the shared governance bill and the no confidence bill.

Several SGA members said the decline of bill proposals is due to confusion in the Senate on how to propose a bill. The old process required senators to print and fill out a form on the SGA website. The new process requires senators to submit a proposal on the SGA OrgSync Web page. Class of 2019 Sen. Thomas Horgan said many of the new senators may not fully understand their role in the legislative process, hindering the “cohesiveness” of the Senate.

“In terms of bill proposals, I think you would have to chalk it up to a young senate,” Horgan said. “I don’t think it should correlate, but less experience may affect senators’ confidence when going about navigating the proposal process.”

Many members of the SGA said the lack of senate participation is due to having many inexperienced senators. Recckio said most of the bill proposals in the fall semester came from the executive board and that they set a precedent for the Senate to expect the executive board members to be the sole legislators.

“We need to do a better job of empowerment, getting senators to feel empowered to craft legislation and build on what’s been going on this semester,” Recckio said.