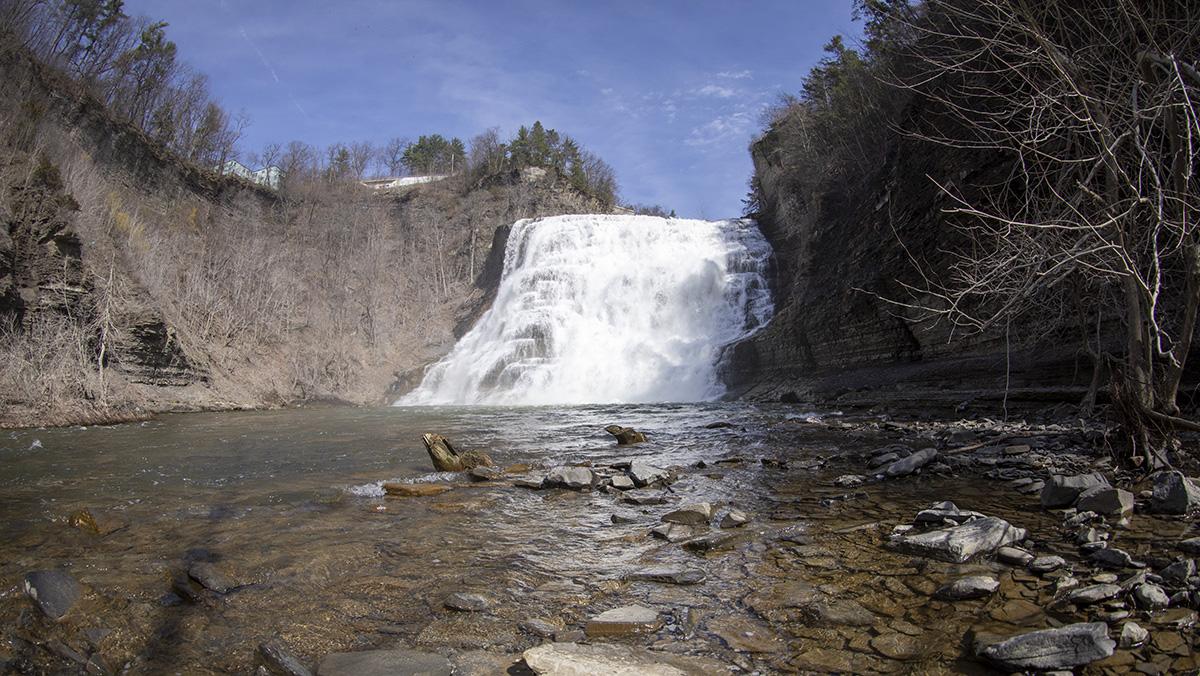 Abby Brady/The Ithacan
As the effects of climate change begin to roll in, locals in Ithaca can expect increased flooding and severe weather. Many of the city's buildings are at high risk of flooding.
By Clare Shanahan — Staff Writer
Published: April 13, 2022

As the global threat of climate change-related weather events intensifies, infrastructure, farming and human life and property in the state of New York and the City of Ithaca are being impacted. Meanwhile, local preparation for these changes are limited or just beginning.

On Feb. 27, the United Nations Intergovernmental Panel on Climate Change (IPCC) released its annual climate report. The report states that in North America, climate change will affect crop production, infectious diseases, heat and malnutrition, displacement and flood and storm-induced damages. According to the Deloitte Economic Institute, inaction on climate change could cost the U.S. economy $14.5 trillion by 2072.

Mark Wysocki, New York state climatologist for the National Oceanic and Atmospheric Administration, said the impacts of climate change are already visible across the state and Northeast U.S.

Wysocki said in southeast New York, sea levels have risen nine inches in the past 20 years with projections to rise 10 more inches in the next 10 years. In central New York, less snowfall and increasing temperatures are impacting the economy by drawing less ski-tourism and inhibiting farming. More broadly, the Northeast U.S. has seen an increase in extreme rainfall and flooding.

“[Climate change is] a reality that we cannot change at this point and that just applies to everything in our world, whether you actually address it or not,” Aitken said.

In Ithaca, the major concerns related to climate change are flooding, droughts and climate refugees, Rebecca Evans, sustainability planner for the City of Ithaca, said.

According to the United Nations Refugee Agency, an average of 20 million people a year are forced to relocate within their countries due to climate change.

“[Ithaca is] going to become a really desired destination for people that are seeking refuge from rising ocean levels, increased heat or the inability to provide climate controlled spaces at a large scale,” Evans said.

According to a report by ProPublica, the northeast and midwest will become the most suitable areas for life in the U.S. as the country’s other regions face conditions unsuitable for life and farming.

Although it is protected from climate change in many ways, Ithaca is at risk of major flooding due to its placement in relation to the Cayuga Inlet, Fall Creek, Cascadilla Creek and Six Mile Creek, according to the Local Flood Hazard Analysis (LFHA) created for the City of Ithaca in 2020. In February 2022, the Federal Emergency Management Agency (FEMA) released the first draft flood hazard map of Ithaca since 1981.

FEMA defines a 100-year flood zone as having a 1% chance of annual flooding. According to the FEMA map, at its widest point in the City of Ithaca, a 100-year flood zone covers nearly a mile of land from west of the Cayuga Inlet to Linn Street, and almost 3 miles from Cayuga Lake to the southern border of Ithaca.

“I’ve been in Ithaca for a long time and over the years, it’s more and more frequent that downtown [the] Fall Creek area will get totally swamped once or twice a season,” Lauren O’Connell, professor in the Department of Art History, said.

O’Connell, whose specialties include the history of architecture, said the college is protected from flooding due to its location on South Hill. The buildings are also protected from extreme weather and temperature by their concrete frames, sturdy materials and minimal height.

According to the college’s website, the Athletics and Events Center, the Dorothy D. and Roy H. Park Center for Sustainable Business and the Peggy Ryan Williams Center, wall feature sustainable, energy-efficient designs that allow minimal fossil fuel use. O’Connell said, for example, the Park Center was built with a wall of South-facing windows that catch sunlight to heat the building naturally.

Evans said where she lives in Downtown Ithaca, a day of rain can flood her basement up to 3 inches.

The FEMA maps will also determine flood insurance rates. According to the website, many homes in the 100-year flood zone require flood insurance that, Evans said, could cost property owners about $100 monthly.

Evans said the city does not seem well prepared for a massive flood. The LFHA assessed the flood risk for the city and compared flood mitigation strategies. The plan  recommends dredging Cayuga Inlet, a flood mitigation structure for the city, to increase its water capacity, building higher flood walls and installing devices to prevent flooding in the sewer system.

In the event of extreme weather and flooding, the college has response plans. The Emergency Readiness and Response Guide recommends evacuating to an undecided location.

Samm Swarts, assistant director of Emergency Preparedness and Response, said evacuation of the campus would only occur in extreme scenarios and an evacuation location would be selected at the time of the event. If the event is less extreme, Swarts said many campus buildings have designated shelter areas.

“When bad things happen [it] allows us to practice and it allows us to really see where the holes in our planning are and then go back and redesign the plans, if needed,” Swarts said.

Wysocki said these issues will compound; when farmers treat their plants with more chemicals to handle pests, increased rainfall and flooding will then produce greater runoff of these and other pollutants into water systems.

According to the U.S. Environmental Protection Agency, more frequent extreme weather events and supply chain disruptions will cause global food prices to rise.

“[Storms] can really be a disaster situation for our farms. We’re not only talking about water, but we’re talking about high winds. Depending on where it happens within the season, you could have complete crop failure and loss and there’s no coming back from that,” Deamer said.

South Hill Forest Products (SFHP) is a student-run business at the college that produces and sells products including honey and maple syrup. Aitken, who is a TA for SFHP this semester, said she has not seen direct impacts to the sugar bush and apiary operated at the college, but the two production processes are susceptible to climate change.

Aitken said maple syrup production starts when temperatures reach above freezing during the day and ends when maple trees bud in the spring, a timeline that is changing with the climate.

“Having those below freezing at night and above freezing during the day weather patterns is literally what makes sugaring possible,” Aitken said. “Having fluctuating climate conditions makes that a lot more unstable.”

Aitken said honey bees are similarly affected by changing temperatures that determine their chance of survival in the winter. Climate change also affects how much and when nectar and pollen are available for bees to use in the honey creation process. All of these changes, Aitken said, are things beekeepers and maple syrup producers will have to adapt to going forwards.

Although agriculture in Ithaca will be impacted by climate change, Deamer said many crops grown in New York are exported. If an influx of climate migrants enter the state, the food system must be reassessed to combat food insecurity, Deamer said.

In 2019, New York passed the Climate Leadership and Community Protection Act (CLCPA) to pursue clean energy and climate response statewide with consideration for climate justice, job creation, and public health. Currently a scoping plan that will outline steps towards CLCPA goals is in development.

Sustainability Tompkins, a community-based organization located in Tompkins County, announced April 13 that it will begin a new webinar series to educate the public on these oncoming effects. The first webinar, Climate Disruption and Food Security, will be hosted at 12pm on April 27 and will feature a panel of local farmers, scientists and activists.

At the first of 10 public hearings held in the Bronx and over Zoom on April 5, community members commented on the scoping plan, including requesting the plan address a dedicated funding stream, climate justice and racism and positive job transition.

“As someone who migrated from Bangladesh, a country that’s on the front lines of climate change despite contributing a negligible amount to carbon emissions, I can tell you in no uncertain terms that displacement, disease and migration as a result of the fossil fuel economy is very real and that carbon emissions and pollution do not recognize borders,”Arif Ullah, executive director of South Bronx Unite, said at the April 5 hearing. “What we do here, our policies here, affect not only New Yorkers but people everywhere.”