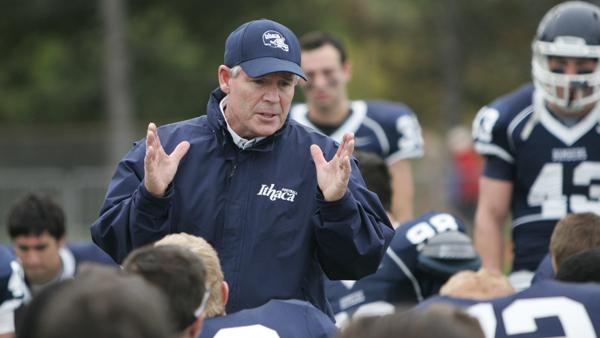 The Ithaca Bombers announced Sunday that football Head Coach Mike Welch will undergo heart bypass surgery Tuesday and will take “an indefinite leave of absence from his coaching duties.”

Welch will undergo the procedure at Rochester General Hospital and informed the players that he will not be with them for their next game at St. John Fisher College on Saturday. He said he hopes to return to the sidelines for the Bombers’ game against Salisbury University on Oct. 27.

“I know that our players, coaches, staff and other members of the IC family and Ithaca community wish Coach Welch the best,” Kutler said in the release. “We all look forward to his full recovery and return to Bomber football.”

Senior wide receiver Joe Ingrao said Welch informed the team last week that he would be having a checkup, but he did not think it would amount to anything. Ingrao said Welch’s absence is painful for him and the other seniors on the team.

“This is a tough thing for all of us, and everyone on the team loves Coach Welch,” Ingrao said. “He’s been there for the seniors all four years now; it’s something that’s difficult for us to deal with.”