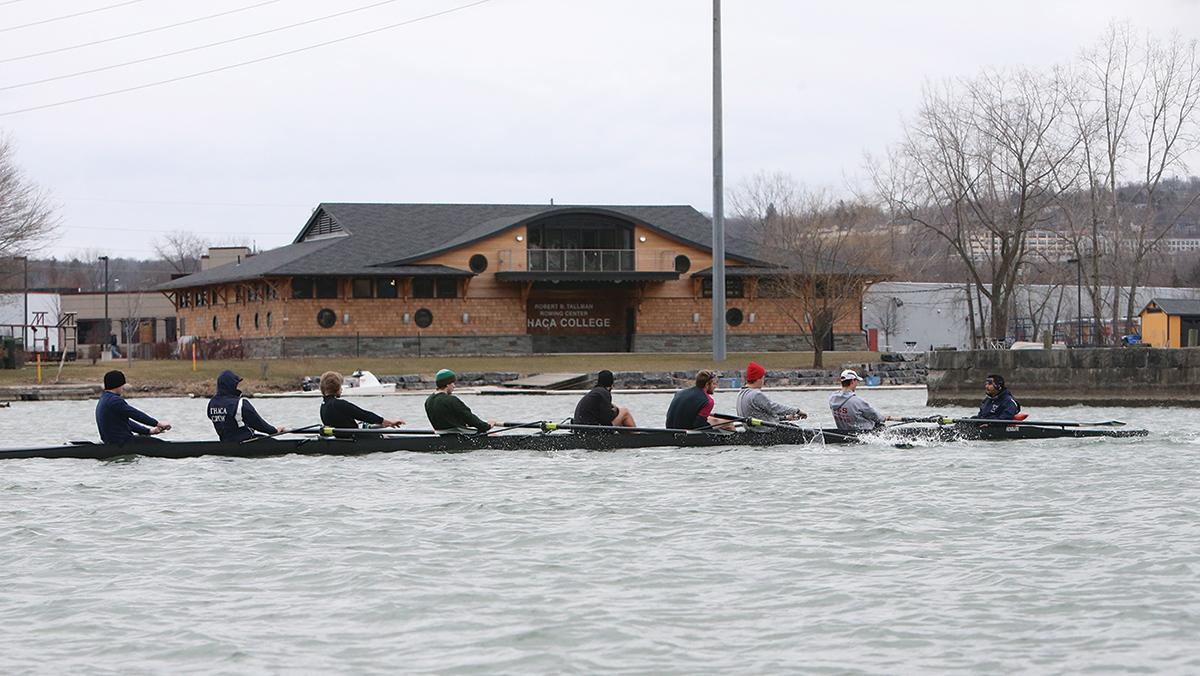 Robert Tallman/ The Ithacan
An alum and former rower of Ithaca College has filed a Title IX lawsuit against the college's athletic director, crew team coaches and the college. According to the lawsuit, the alum experienced discrimination because of his sexual orientation and a homophobic environment while on the team from 2012 to 2015.
By Laura O'Brien — Assistant News Editor
Published: September 16, 2018

Christopher Kelley ’16, a former rower on the Ithaca College crew team, has filed a Title IX lawsuit against the college’s athletic director, crew team coaches and the college. The lawsuit states that Kelley experienced discrimination because of his sexual orientation while on the team.

Kelley was on the team from 2012 to 2015 and was forced to quit in Fall 2015 because he was too uncomfortable with the way he was treated by his coach and teammates, according to the lawsuit.

According to the lawsuit, these injuries and damages include “emotional harm, severe depression, deprivation of ordinary pleasures of life and pain and suffering caused by the exposure to almost regular and constant hostile education environment.”

In December 2012, Kelley was outed as gay at a party with other members of the college’s crew team, and following this incident, Kelley was forced to make a Facebook post revealing his sexual orientation by his athletic coach during the week of finals, the lawsuit states.

In an article written in 2015 for Outsports, a sports website focusing on LGBTQ topics, Kelley describes a party at which he was outed as gay. In the same article, Kelley says he created a Facebook post regarding his sexual identity in late December 2012, which is when finals would have taken place. According to the lawsuit, Kelley felt “forced” to publish a post revealing his sexual identity, whereas in the Outsports article, Kelley describes sending out a message on his own accord.

“So I decided to own my sexuality,” Kelley writes in the article. “There was no use running from it anymore — especially since everyone already knew. I remember sitting in a movie theater a day before leaving for Christmas break and sending out a mass Facebook message….”

Kelley declined to confirm whether the events in his article for Outsports are the same as those referenced in the lawsuit.

Following this suspension and disqualification, a meeting was held Sept. 9, 2015, at which Daniel Robinson discussed the first paragraph of the Outsports article with the men’s crew team, the lawsuit stated.

Benjamin Zerivitz ’18 was a member of the crew team and served as captain during the 2017–18 academic year. Zerivitz joined the rowing team in 2014 when Kelley was also on the team as a junior. Zerivitz said he remembered the team having a talk about hazing his freshman year as well as a similar talk following the publication of Kelley’s article his sophomore year.

“I believe we had a meeting with someone who came in and talked to us in general about how [hazing is] bad and all that,” Zerivitz said. “They were very clear about that and those rules and that talking to people in a derogatory way is not acceptable on the team. That was definitely a topic that was touched on too.”

According to the lawsuit, other LGBTQ members of the men’s crew team were also subjected to harassment because of their sexualities. During the 2013–14 academic year, a gay sophomore rower at the college quit the team and attempted suicide following abuse and harassment. According to the lawsuit, Daniel Robinson did nothing about this harassment and allowed the harasser, a freshman rower on the team, to continue practicing despite his use of anti-gay slurs.

The Bard Romer Boathouse currently has a no-swearing “policy,” which includes all slurs, junior Hunter Flamm, a current member of the crew team, said. Other cream team members confirmed this. Flamm said he has never heard an anti-gay slur used by a rower at the college during his time on the team, which stretches from Fall 2016 to the present. Flamm also said Daniel Robinson has held meetings to discuss the team’s no-hazing policy and the kind of language allowed in the boathouse at least twice a year during Flamm’s time on the team.

“It’s never in reference to specific incidents, but we’re always being reminded how we’re supposed to treat our teammates and how we’re expected to behave,” Flamm said.

J. Morgan Ewing ’11, a former rower on the college’s crew team, said he witnessed occasional instances of anti-gay slurs being used by a rower but that this was usually by a freshman rower who was then corrected by other members of the team.

According to the lawsuit, during the 2014–15 academic year, the harassment of LGBTQ rowers on the team continued. Two other rowers were also outed as gay during a party attended by crew team members and were also subjected to harassment. The lawsuit states that approximately nine gay rowers, including Kelley who quit Sept. 10, had left the team by September 2015. The lawsuit did not provide specific details about when members initially started leaving the team.

A former crew team member who was on the team from 2011 to 2015, but requested anonymity for fear of putting his career at risk, said he never witnessed any LGBTQ rowers being outed at a party attended by crew team members while at the college. This same rower said that whenever students would leave the team, there was rarely context provided as to why they had made this decision.

“It’s very easy for people to burn out in rowing, so it’s not uncommon for there to be 30 people [who] try out for rowing, and by the end of the year there’s eight of them left,” Flamm said. “It doesn’t reflect badly on the team. It’s because of the sport.”

According to the lawsuit, “the team members who outed and harassed the gay rowers

Daniel Robinson caused Kelley intentional emotional distress through his actions, and Becky Robinson, Bassett and the college failed to prevent Daniel Robinson from causing this distress, the lawsuit states.

Daniel Robinson and Becky Robinson declined to comment on the lawsuit. Becky Robinson said coaches of the rowing team are constantly striving to create an environment in which athletes feel supported, a value she said is reflected by the athletics office as a whole.

Kelley and his attorney, Kelsey Shannon, also declined to comment.

The college is aware of the allegations that have been made but currently has no comment on the litigation, David Maley, senior public information officer, said. The college stands by its work and continued efforts to be a comfortable and open place for LGBTQ community members, Maley said.

“We have been and will continue to be an institution committed to providing a safe, welcoming and inclusive environment for all, including LGBTQ students, faculty and staff,” Maley said.

Bassett said she is unable to comment on the Title IX lawsuit specifically but said the college’s athletics office strives to create a space that emphasizes open inclusivity.

“I want to emphasize to everyone that Ithaca College athletics embraces inclusive excellence and strives to create an environment that is welcoming to all individuals,” Bassett said. “Our mission is to support Ithaca College’s priorities, and as such we embrace a climate of cultural awareness and inclusiveness.”

A large number of crewing alumni have voiced support for the team and coaching staff at the college in emails to The Ithacan following the filing of the lawsuit. This includes many alumni from the women’s rowing team, who have said their team has consistently been inclusive and welcoming to all students, including members of the LGBTQ community.

The lawsuit was filed in the United States District Court for the Northern District of New York.