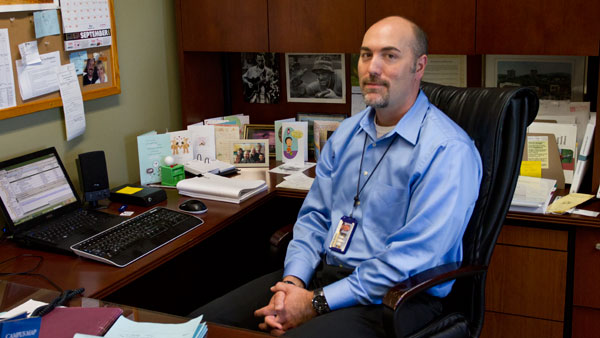 Tucker Mitchell/The Ithacan
Zach Newswanger, director of facilities maintenance, said the biggest obstacle of the repair is that the ruptured pipes are underground.
By Lisa Famularo — Staff Writer
Published: September 26, 2013

On a mid-September day, senior Anna Isachenko sat in her Leadership, Power and Politics class in room 206 of the Park Center for Business and Sustainable Enterprise. Gazing around the room, she noticed everyone was more sluggish than usual, because the School of Business was significantly hotter than it should be this time of year.

“I know a lot of people complained about it,” Isachenko said. “It wasn’t too terrible, but people definitely felt it.”

Zach Newswanger, director of facilities maintenance, said the chiller, a cooling machine located in Job Hall, had to be shut down because of ruptures in one of the four-year-old water pipes that runs underground and connects to the cooling tower on the roof of Dillingham Center. Newswanger said he does not know what caused the ruptures. This chiller is responsible for lowering the temperature of the Hill Center, Dillingham, the School of Business, Job, Friends Hall and Muller Faculty Center. However, it is currently out of commission because of the puncture.

In mid-August, just before students returned to campus, the Office of Facilities first noticed the ruptures that caused the system to leak water, Newswanger said. Because of the lack of water flow, the system was not able to cool the connected buildings and had to be shut down. Facilities connected another chiller located in the James J. Whalen Center for Music, usually only responsible for cooling Whalen and Gannett Center, to the Job system. This connection is temporarily providing at least some cooling.

“When you’re asking a system that usually only takes care of cooling for a certain part of campus to do it for a larger part, you can only cool to a certain extent,” Newswanger said. “But when we get to the really, really, really warm days like we did last week, and the few days in the week before that and such, you can feel it more.”

Newswanger said the cost of the repair is estimated to fall between $100,000 and $200,000. He is currently looking for the most cost-effective and long-term repair.

“Not that any amount of money is a small amount, because at the end of the day, it’s all college money that’s driven by tuition,” he said. “I try to make sure we use the college’s money as wisely and fiscally sound as possible. That’s why I’m looking at this going, ‘I don’t want to go spend a lot of money now and be faced with the same problem within a year because it only provided a temporary fix.’ I’m trying to assess the entire situation and put into place what will be a long-term repair, a permanent repair.”

Newswanger said the biggest obstacle is accessing the ruptured pipe, which is buried about 10 to 12 feet underground in a flowerbed located between the Dillingham fountains and Job. The flowerbed is only 100 feet long by four feet wide and is therefore inaccessible by large excavating equipment.

Once construction workers are able to reach the pipe, another decision must be made about how to fix it. George Shank, supervisor of mechanics for plumbing, heating, ventilation and air conditioning, said Facilities is considering replacing the pipe, fixing the existing pipe with newer technology or moving the cooling tower on the roof of Dillingham closer to the chiller in Job.

On days when it was uncomfortably hot, Shank said the cooling system in Whalen was set to run 24 hours to increase the speed of cooling the building.

“[Chillers in the] academic buildings are usually shut down at night to conserve on energy,” Shank said. “Different buildings have different schedules, but we were trying to leave those on, especially the buildings that would be affected.”

Newswanger sent an email to some faculty and staff members who work in the affected buildings on Aug. 21, shortly after the issue was discovered. He explained the situation and notified them that the system would not be running at full capacity. He said once a construction plan is put in place, the campus community can expect to receive an Intercom announcement explaining what happened and how the issue is going to be resolved.

Shank said the issues with the chiller will have no effect on the heating systems, which are already on in most of the buildings. The chillers will remain running until the temperature drops to below freezing overnight so that they are available if needed.

“We’re really trying to figure out the best and most cost-effective way to address this issue,” Newswanger said. “It is a top priority, and I would like to get it fixed as quickly as possible.”