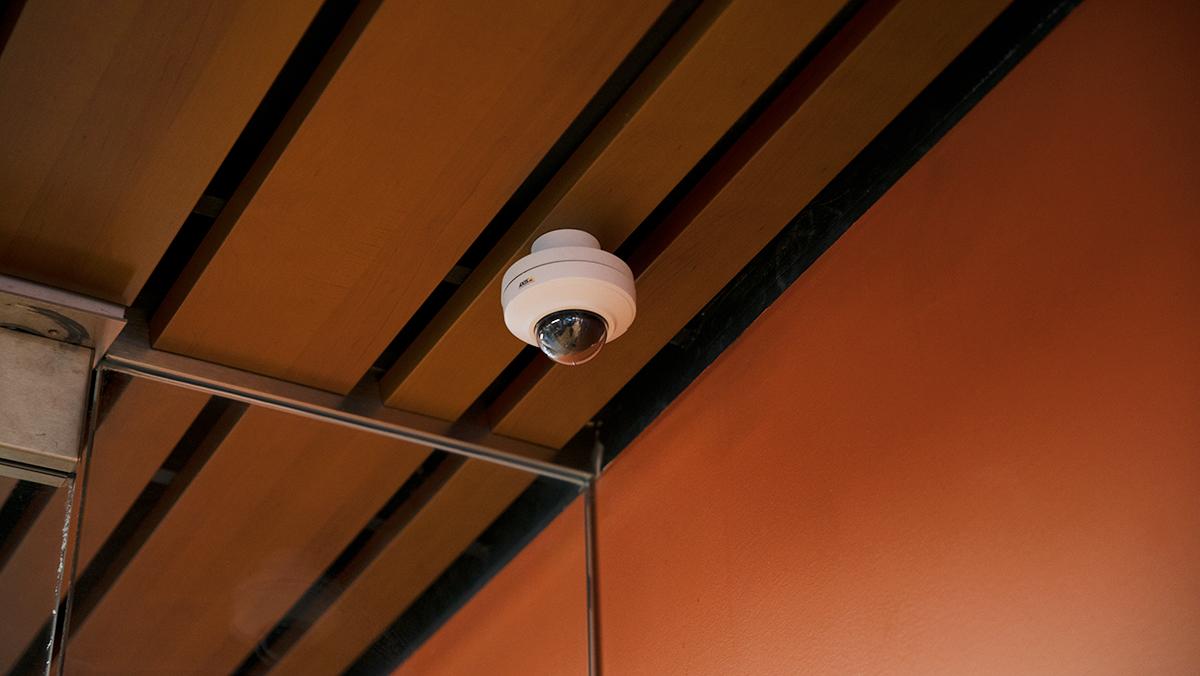 Ana Maniaci McGough/The Ithacan
In an effort to curb its notoriously long lines, the Campus Center Dining Hall now has a camera perched by the front exit. The camera, which provides a constant video feed of the inside of the Campus Center, allows students to see how crowded the dining hall is at any given time.
By Joshua Pantano — Staff Writer
Published: April 13, 2022

In an effort to curb its notoriously long lines, the Campus Center Dining Hall now has a camera perched by the front exit. The camera, which provides a constant video feed of the inside of the Campus Center, allows students to see how crowded the dining hall is at any given time.

The camera pilot program was announced via Intercom on March 24. Students can view the camera feed by logging in with their Netpass credentials through the Ithaca College website. The program intends to help cut down on the long lines at the dining hall, which often stretch out of the front entrance and spread all the way down to the bakery or recreational center during peak hours, by giving students a live feed of the Campus Center. The program also functions as an experiment to determine whether or not the camera feed can help decrease the amount of students in the dining hall at peak hours.

David Prunty, executive director of Auxiliary Services, headed the installation of the camera and pushed for the idea, which was originally conceived by students from the School of Business who wanted to help shorten the lines at the Campus Center.

“This is a pilot to see if putting a camera in there helps influence people’s behaviors,” Prunty said. “You can tell people over and over again that during certain times of the day there’s gonna be a lot of lines down there, but maybe it would help to actually show [that].”

The idea to try and shorten the line lengths responds to a criticism by many students that the lines at the Campus Center often stretch too far. Sophomore Danka Hlinka said she works to avoid the lines entirely, but has doubts about the camera program’s effectiveness in helping the line situation.

“I do think they are long,” Hlinka said. “I actually plan my life around not waiting in them. … So I understand that [the camera feed] is information, but I don’t see how a camera is going to solve the line waits.”

“It’s just unfortunate, but this has been a problem for 30 or 40 years,” Prunty said. “We have a very giant dining hall that’s way up there [Terraces] and a very small dining hall that is right in the middle of the campus.”

“I think sometimes this school goes for short–term resolutions as opposed to actually looking into the structure of why these things aren’t working,” Weisblatt said. “Maybe we could go toward the long–term solutions going forward.”

Freshman Grant King, a student–employee at Campus Center, said he feels students will be unlikely to change their behavior because of the camera feed.

“I don’t know how many students will use it to survey how busy [Campus Center] is because… even if it’s busy, if you’re hungry, you’re gonna go,” King said. “I’m kind of indifferent to the whole thing, unless there’s a long line out the door.”

Prunty said that as of right now, there have not been any changes in student behavior or line lengths. However, the camera program only became active three weeks ago, and Prunty said that the program will likely receive more traction next semester.

“It’s the second half of the spring semester. People’s behaviors are already super well–established,” Prunty said. “My guess is that it’s gonna go into next fall semester, because that’s a chance to actually have people know it’s there and use it from day one.”

Prunty said there are plans to install more cameras in Terrace Dining Hall and Towers Marketplace, provided the project goes well. But for now, Prunty and the Dining Hall staff are keeping an eye on the effectiveness of the current camera pilot in Campus Center.

“This is an experiment,” Prunty said. “It may not work. If it doesn’t work then we will repurpose the camera to [The Office of] Public Safety,… But the hope, as we keep pushing this forward, is that people will have just more information. And I hope that people are able to use it.”