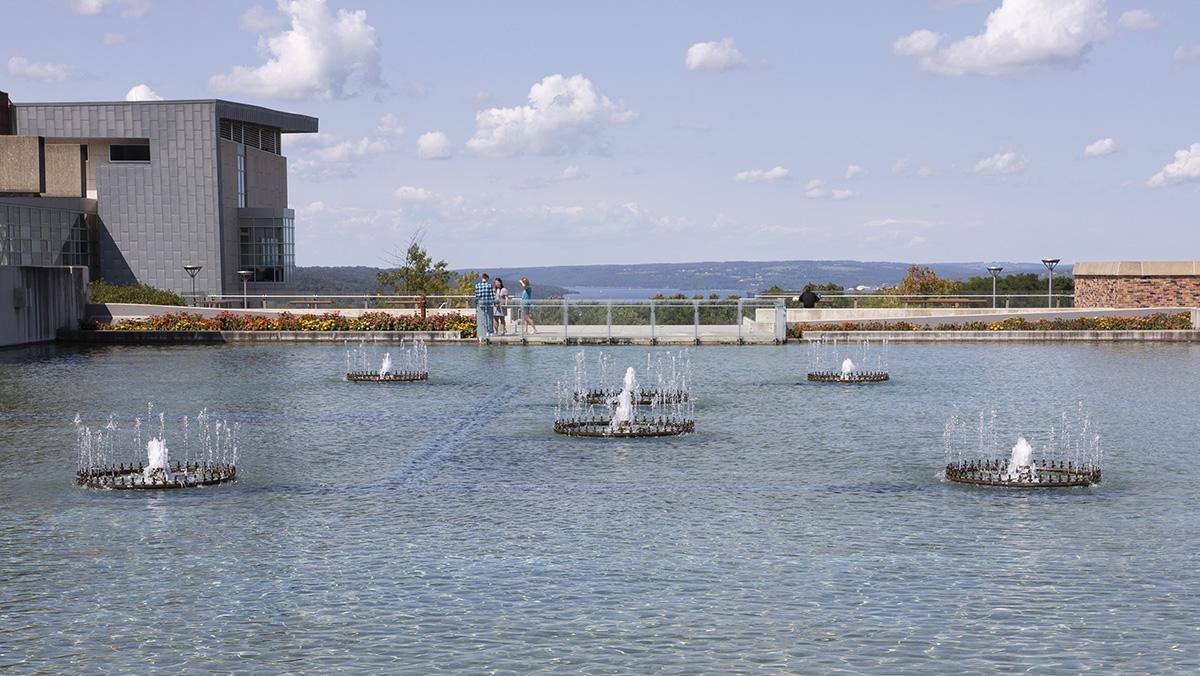 Eleanor Kay/The Ithacan
Nearly 3,000 people were killed during the attacks, including six members of the college community. On Sept. 11, 2001, two planes flew into the World Trade Center in New York City and a third plane into the Pentagon in Washington.
By Caitlin Holtzman — News Editor
Published: September 15, 2021

Along with the rest of the country, many members of the Ithaca College community spent time reflecting on the 9/11 terrorist attacks on the passing of its 20-year anniversary.

Nearly 3,000 people were killed during the attacks, including six members of the college community. On Sept. 11, 2001, two planes flew into the World Trade Center in New York City and a third plane into the Pentagon in Washington. A fourth plane crashed in Shanksville, Pennsylvania, after its passengers overtook the hijackers, leading to the crash in a field. Interim president La Jerne Cornish sent a message Sept. 10 asking members of the campus community to remember and honor the people who died in the attacks.

“The events of September 11, 2001, changed this country forever — and changed the lives of many within our IC family in direct and substantive ways,” Cornish said in the message.

Cornish also asked members of the campus community to visit the Peace Pole located at the Muller Chapel Pond on the anniversary. The pole was dedicated to the college in 2002, on the one-year anniversary of the attacks and has the phrase “May Peace Prevail on Earth” written in eight languages. Additionally, there is a plaque with the names of the six members of the campus community who died in the attacks. Their names are Vincent Abate ’83, Thomas Collins ’87, Ronald Ruben ’87, Steven Russin ’91, Derek Statkevicus ’93 and then-senior Johanna Sigmund, sister of John Sigmund ’02.

Rebecca Lesses, associate professor in the Department of Philosophy and Religion and Jewish Studies coordinator, said she began teaching at the college in Fall 2001. She said the day of the attacks she was teaching classes in the afternoon and did not arrive on campus until later in the day. She said she remembered seeing students in the Campus Center using a phone set up for students to call their families as many students did not have their own cell phones at the time. Lesses said that once she got to her class, she knew she would not be following her lesson plans.

“The thing I remember is it seemed really strange to just launch into the topic of the day in the classroom,” she said.

Lesses said she remembered students asking her questions about the attacks in the following days.

“I think people were just really shocked and didn’t know what to think,” she said. “That week, I just offered time for students to have conversations about it in the class.”

Lesses said as the years have gone by, she has begun to realize that fewer students have any recollection of the attacks or were even born before the attacks.

Junior Alexandra Barbaro was born in November 2002. She said she grew up in Staten Island, one of the five boroughs of New York City, which she said had an effect on how much she knew and was taught about the attacks. She also said her uncle, Paul Barbaro, was killed in one of the Twin Towers during the attacks and it was difficult for her to be in Ithaca and away from home on the anniversary.

“When I was younger I never went to school on the day … and my whole entire family would all go to a service, either in the city or at home,” she said. “So to be here, four hours away, and to have them all go to the service was a little hard. It was even harder not having a service to go to here.”

Barbaro said the 20-year anniversary makes her feel old. She said she was expecting the college to have some sort of event on the anniversary, but she took time herself to reflect on the attacks and her loss. She also said she hates when professors and teachers growing up would compare students’ ages to what anniversary of 9/11 it was that year.

“It makes your life and the time that you were born very sad,” she said.

Junior Henry Page said he was born in February 2001 and grew up in Virginia, near Washington. He said he remembers his mother telling him about hearing planes flying over their house on 9/11 and not knowing if they were part of the U.S. military.

Page said that for all 20 years of his life, he has not known a time when the U.S. was not in Afghanistan. The United States military invaded Afghanistan in 2001 after the Sept. 11 attacks and were in Afghanistan for 20 years. The military was fully out of Afghanistan by Aug. 30, 2021, which left the Taliban back in charge of the country.

“It’s always been there, this war, this fight in Afghanistan, this war on terrorism,” he said. “It was always there as we grew up … that part of it is a little bit frightening.”

Page said he remembered thinking in 2020 that the 20-year anniversary was coming up in 2021. He said it felt odd to him to realize that it had been 20 years since the 9/11 attacks.

“It’s been 20 years of always remembering that moment and that time in my life that I don’t remember personally, but have just heard so much about through other people,” he said.

Junior Arlo Catanzaro said he was born in July 2001 and grew up in New York state near the Canadian border. He said his parents said they remember how it was easy to cross the border into Canada and back, but that changed after 9/11.

“Not to say getting into Canada is a hard thing, but now there’s more checks and you can’t bring in stuff or bring it back into the United States,” he said. “It was quite the change for a lot of people upstate.”

Catanzaro said he remembers teachers showing videos of the 9/11 attacks in many of his classes growing up and discussing the attacks every year on the anniversary. He also said the 20-year anniversary made him feel old.

“Honestly, I didn’t feel much because I just have so little knowledge of the world beforehand,” Catanzaro said. “But I did feel like, ‘Wow, we’ve been in a war for almost the entirety of my life.’”

When many current college students were still in middle school, the United States suffered one of the deadliest attacks in its history. Across the U.S., children were taken out of school. They learned a new word that would pervade a decade: terrorism.

As remembrance services for the ninth anniversary of Sept. 11 proceeded this year, one thing was missing on Ithaca College’s campus. The peace pole near the Muller Chapel pond was reported missing to the Office of Public Safety at 3 p.m. Monday.