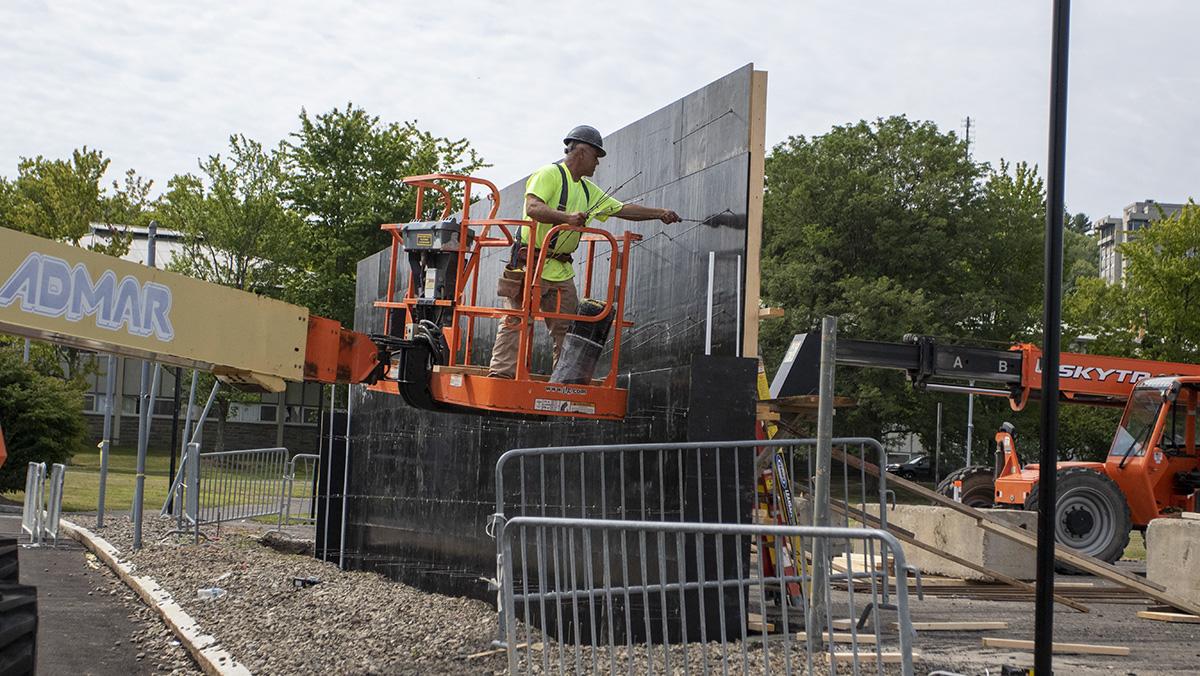 Malik Clement/The Ithacan
Shane Trask, construction worker, gets a lift on the new Lower Quads tennis court at Ithaca College during the start of the fall semester. Due to national supply chain issues leading to delays of needed materials like granite, stone, concrete and paint these projects were not completed over the summer.
By Caroline Grass — Staff Writer
Published: August 24, 2022

Many campus construction and landscaping projects were started over the summer at Ithaca College, but with national supply chain issues leading to delays of materials like granite, stone, concrete and paint, some projects remain unfinished and will be completed in the fall semester.

In May, the Office of Facilities announced a list of initiatives that were meant to be completed over the summer. Many projects were routine, including replacing the AC system in Muller Chapel and boiler maintenance in Terraces 4 and 10 and the Circle Apartments, while other projects were larger. For example, Rothschild Place, which was a temporary structure built in 2004 to accommodate department overflow and Student Accessibility Services (SAS), was demolished and offices were relocated across campus, and multiple aesthetic improvements were made to the campus.

Timothy Downs, vice president for Finance and Administration, said in a normal year, the college would spend about $15 million on capital maintenance projects, which work to improve existing facilities by making sure all aspects of buildings work and are maintained.

During the COVID-19 pandemic, the college reduced spending to between $8 and $9 million since there was less revenue, less use of facilities on campus and less wear and tear on buildings since students were not at the college for Fall 2020 and students returned for hybrid learning in Spring 2021.

However, for the 2023 fiscal year, the college is ramping back up toward the $15 million average, and Downs said the college spent about $13 million on routine maintenance this year.

The college picks maintenance projects to address and complete each summer based on the overall portfolio of the college that includes a condition assessment of the entire campus.

Downs said examples include looking at the roofs of buildings across campus and determining how old they are or mechanical systems and their ages. Deferred maintenance needs tend to be repairing or replacing the functional aspects of buildings, like mechanical, plumbing, electrical, heating and cooling systems; roofs; and windows.

Downs said that most years, the college is able to wrap up construction before students arrive for the fall semester, but because of supply chain issues, students will be seeing some residual construction on campus this fall.

One example is the steps up to the Textor Ball. Downs said the old steps were crumbling, so the college tore them down, created concrete steps and ordered granite from Canada to cover and finish them. However, Downs said the granite was meant to arrive mid-summer, but with continued delays, the granite still has not been shipped, so the steps are currently barricaded.

Junior Chris Bendig said he had only noticed the removal of Rothschild Place on campus and had not been to the Textor Ball but said he did not mind that construction was ongoing this semester.

“I totally understand it,” Bendig said. “Construction can get delayed even in the best of times and these are obviously not ideal circumstances.”

Downs said the suppliers are waiting until they have a full load of material to ship before they are able to deliver the granite. Downs said with higher gas prices, a shortage of drivers and higher costs to pay drivers, materials cost more and take longer to arrive.

In October 2021, the American Trucking Association reported that there would be an estimated truck driver shortage of over 80,000, a historic high, for 2021. Many key building materials are facing supply issues that emerged from the COVID-19 pandemic. Wait times have increased between 75% to 800% for materials like paint, drywall, roofing membranes, roofing insulation and HVAC equipment, according to a CBRE supply chain disruption report.

In July, the retail price for gasoline averaged $4.56 per gallon in the United States, and retail diesel was $5.49 per gallon according to the U.S. Energy Information Administration’s Short Term Energy Outlook. On Aug. 11 the average national gas price lowered below $4 for the first time since March, signaling that gas prices could continue to stabilize.

In addition to the routine log of deferred maintenance that gets addressed and worked on every summer, the college had an additional $6.7 million to spend on aesthetic projects this summer. Downs said this funding came from money the Board of Trustees reserved for capital initiatives from a surplus the college had in the 2018–19 academic year.

Aesthetic improvements included cleaning and adding color to the exterior of the Dillingham Center, cleaning the exteriors of many buildings including Smiddy Hall, repairing and repainting the Lower Quads tennis courts with the addition of adding lines for pickleball and two basketball courts in the area, replacing the concrete wall around a section of the Dillingham Fountain with glass and paving campus roads and paths.

Junior Alex Renzoni is a tour guide for the college and said he was on campus for much of the summer and saw the construction projects going on. He said he thought the cleaning of buildings, especially Dillingham, was a welcome improvement but said he was a little disappointed that the construction of the Textor Hall steps was still ongoing, since it is a central avenue that students use to get around campus.

“As a tour guide, it isn’t our job to tell students that Ithaca College is the right place for them, but I do believe that it is our job to show students everything we have to offer, and I think the aesthetic of our campus is a very important part of that package,” Renzoni said.

Downs said that improving the area around the fountains by replacing steps, repairing walkways and taking out the concrete wall between Dillingham and the fountain and switching it to glass would help make the area more welcoming and accessible for students and families.

“This is where families come,” Downs said. “Not just for commencement. Families that are taking campus tours get walked right down through here [around the fountains]. … I’m a big believer, you know, if people are making assessments and saying, ‘if this is how you are maintaining your campus, what can we expect in the classroom? What can we expect in our experiences [at the college]?”

In addition to the maintenance projects, diseased trees across campus were also removed in July to protect healthy trees, prepare for new ones to be planted and create space for landscaping projects.

The campus’s native ash trees and the non-native Australian pines are the afflicted trees. An invasive beetle, the emerald ash borer, has killed off many of the ash trees, and a fungal disease called diplodia tip blight has been harming the Australian pines, especially pines over 30 years old.

The dead Australian pines were mainly removed from Alumni Circle, the ash trees from S-Lot and both tree types near Circle Apartments 120, 130 and 150.

Ernie McClatchie, executive director of Facilities, Grounds and Transportation, said the removal of some diseased trees had been delayed because of the COVID-19 pandemic.

“We were actually contemplating taking down a bunch of those [Australian pines] prior to COVID-19,” McClatchie said. “However, with the challenge of [campus] being closed and things like that, it kind of just got delayed a little more and more.”

The dying trees in Alumni Circle created an opportunity to install a walkway connecting the Visitor Lot to the Peggy Ryan Williams Center. McClatchie said the walkway will have better accessibility because anyone taking the path will not have to walk uphill. The construction of the walkway area has been delayed, but Downs said he expected construction to be complete in October or November.

Junior Avery Lavergne said the first thing she noticed when she arrived on campus was the section near Alumni Circle with cut down trees and did not initially know why they were removed. However, once she learned that the trees were diseased or dead, she said the removal made sense.

She said of the projects she has seen on campus, the Textor stair replacement and new tennis courts with added pickleball and basketball courts were the most exciting.

“I noticed the stairs at Textor today and that [fixing the steps], I think is a real improvement,” Lavergne said. “I love the idea [of replacing the tennis courts]. People use them for many activities like skateboarding and having a place to skate or rollerblade on campus versus having to take the [Tompkins Consolidated Area Transit bus off campus] or drive down to the skatepark is important.”