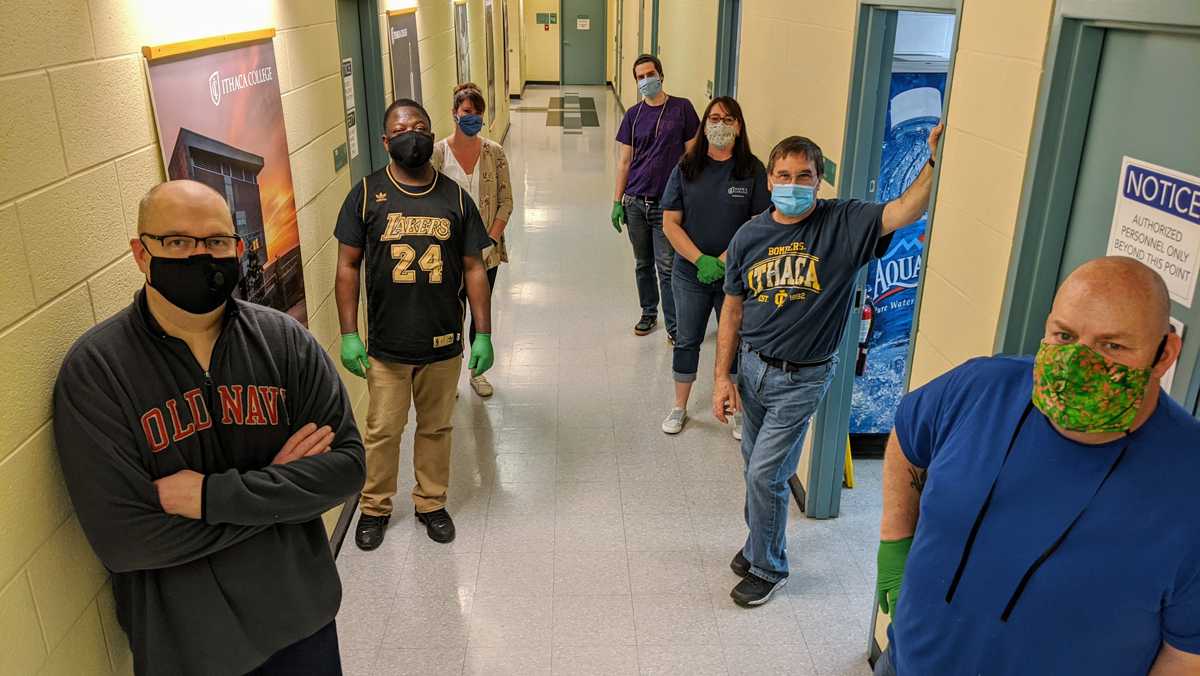 Courtesy of Jeffrey Golden
The production team, which includes six full-time staff and three to four part-time employees, had the goal of creating a universal, inexpensive mask that could be easily produced using preexisting materials found in the print shop, said Glen Harris, operations manager of the print center.
By Syd Pierre — Contributing Writer
Published: September 7, 2020

The Center for Print Production at Ithaca College usually produces posters, road signs and materials for classes, but, in light of the COVID-19 pandemic, has pivoted to producing masks and face shields for members of the campus community and the greater Ithaca area.

On March 20, Gov. Andrew Cuomo announced that New York state was in desperate need of personal protective equipment (PPE) and asked companies that had the materials available to repurpose them to help to produce PPE. The print shop answered Cuomo’s call and began brainstorming designs that weekend. The production team, which includes six full–time staff and three to four part-time employees, had the goal of creating a universal, inexpensive mask that could be easily produced using preexisting materials found in the print shop, said Glen Harris, operations manager of the print center.

The face shields are made out of a thinner version of expanded PVC material that is typically used for signage, and the masks use a buckle system made out of similar material. The only materials the shop needed to source from outside its existing supplies were the elastic and fabric needed for masks. The team purchased the medical-grade fabric from an outside company called Sustainable Solutions, while the elastic, because of high demand from other producers, was more difficult to find. Harris said he had the idea to salvage the material from elastic men’s belts, an out-of-the-box solution to a time–sensitive problem.

“You’re kind of inspired to help because the governor was asking companies to pitch in and help,” Harris said.

In New York state, masks and face coverings are mandatory in areas where social distancing is unable to be followed, like inside businesses and on public transportation. The demand for masks and face shields has remained high since the order went into effect in April. Since the end of March, the print shop has produced 12,000 face shields and approximately 45,000 masks. The material cost of the masks is around $0.15, while the face shields run higher at $1.20. Both pieces of PPE take approximately 45 seconds to assemble.

“We have not slowed down at all, and I thought that suppliers would catch up with demand, but obviously it hasn’t yet,” Harris said. “But most of what we’re doing now is for campuses. But we still do get orders from outside [companies].”

“I think the reward for me, at least, is particularly meaningful because I think it acknowledges how hard [the team] has all worked,” said Jeff Golden, director of general services.

The production process has highlighted the teamwork not only in the print shop but across campus, Golden said.

“It’s not just been the print shop in many ways,” Golden said. “It’s been kind of an institutional effort.”

He said that Mail Services employees have helped to produce PPE, as well as staff members from Dining Services and the Office of Facilities.

Senior Madeleine Guerrier worked in Mail Services on campus over the past year but transitioned over to the print shop to help to produce masks. Over the summer, she worked three days a week assembling masks, a task that involved cutting up elastic or fabric pieces, which depended on the levels of mask-making supplies that day.

“The repetitive nature of it is something that’s completely new to me and I’m learning to be OK with,” Guerrier said. “But also something I’ve learned is not every day is going to be the same. You could spend one day cutting up belts for eight hours at a time … and the next day cut fabric for masks.”

While the college transitioned to remote learning for the fall semester, it is likely that a few students will be working in the print shop, Golden said.

Alongside PPE production, the print shop has continued to produce signage for the college, including information about social distancing and COVID-19. Students and faculty members living in the Ithaca area can request a free “Wear A Mask” lawn sign. The print shop will continue manufacturing PPE in the fall, Golden and Harris said.

The print shop is currently supplying students with masks and will continue to do so, Harris said. The masks are available 24/7 in the Office of Public Safety and Emergency Management lobby, and students can also request to have them delivered if they live off campus.

“We can manufacture here more inexpensively than we would otherwise have to purchase it,” Golden said. “If we’re able to at least satisfy our own demand institutionally for them, that’s what we’ll try to keep doing.”