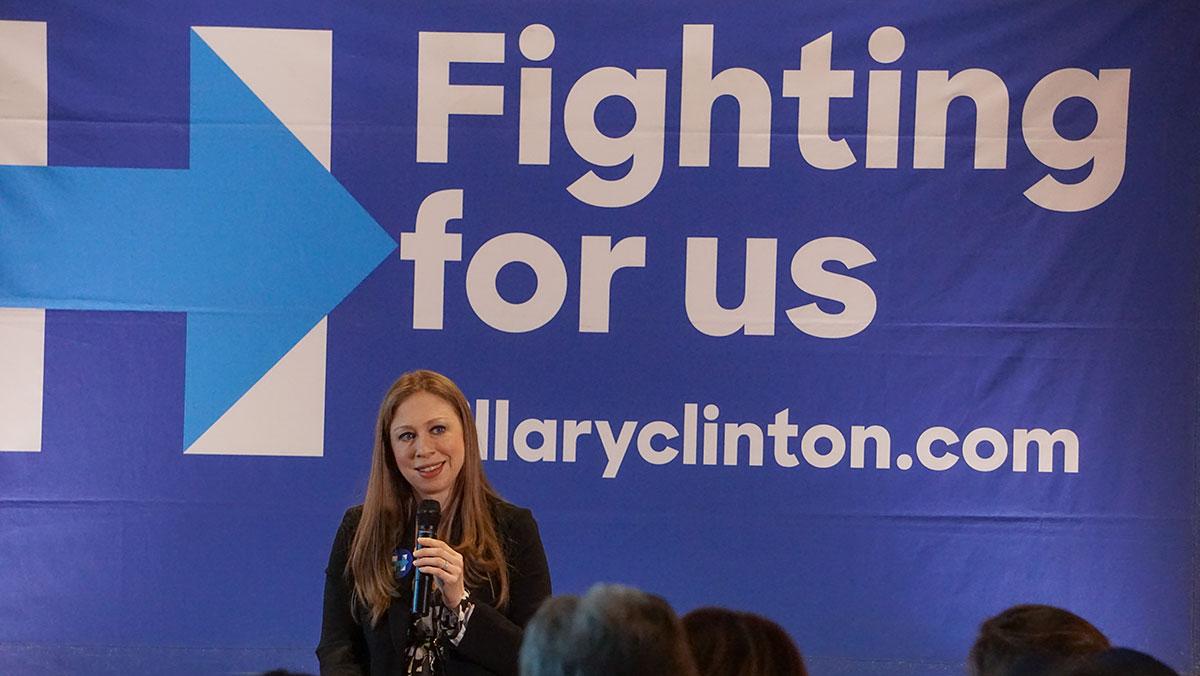 Elena Piech/The Ithacan
Chelsea Clinton, daughter of presidential candidate Hillary Clinton and former President Bill Clinton, speaks at a campaign stop for her mother April 18 at Coltivare restaurant as part of a Get out the Vote event.
By Anna Lamb — Contributing Writer
Published: April 19, 2016

Chelsea Clinton, daughter of presidential candidate Hillary Clinton and former President Bill Clinton, made a campaign stop for her mother April 18 at Coltivare restaurant in downtown Ithaca as part of a Get out the Vote event, urging voters to turn out for the upcoming primary.

Approximately 150 community members attended the event, which began at 8 a.m., and is part of several campaign stops made by the family preceding April 19’s New York primary. The stop in Ithaca follows other New York stops in Hudson Valley and Binghamton for Chelsea Clinton and stops by Bill Clinton in Albany, Binghamton, Syracuse and Watertown.

Chelsea Clinton centered her talk around children and families, following her announcement that this presidential election will be her first as a mother. Clinton addressed her mother’s bipartisan work in the Senate and as secretary of state. She also stressed how her mother has worked to further equality for women and members of the lesbian, gay, bisexual and transgender community.

There was a Q&A portion of the event, where members of the community were invited to ask Clinton about her mother’s stances on issues. Cynthia Henderson, associate professor of theater arts, asked her about Hillary Clinton’s stance on fracking and its hazardous environmental outcomes.

Chelsea Clinton said her mother supports President Barack Obama’s executive actions like banning methane but that ultimately, decisions on the subject are up to the Supreme Court.

“I was expecting a little more evasion from Chelsea, especially when it came from the more difficult questions about fracking, specifically,” Henderson said.

During a news conference with local reporters following the event, Clinton was also asked about the issue of free speech in elections. Clinton responded that she, as well as her mother, are staunch supporters of overturning the Citizens United decision, a ruling that allowed political spending as a form of protected speech under the First Amendment.

Several protesters interrupted Clinton during the event. Ariel Gold of Code Pink, a nationwide feminist movement, stood up and asked Clinton and the crowd to end conflict in Palestine. Code Pink’s website states that the group uses tactics such as civil resistance and directly challenging powerful decision-makers in government and corporations.

Gold said she put this to work during Clinton’s speech.

“Protest and disruption is part of our political history,” Gold said. “We have a long and proud history in America of using civil disobedience, as well as using boycott to bring about social change.”

Cornell University students Michael Ferrer and Amy Methven stood up during the event as well. Along with a few of their classmates, Ferrer and Methven said, they tried to make their voices heard, speaking out against human rights violations in Qatar.

“Cornell has a campus in Qatar, and the labor conditions for our campus workers and also especially the people working on the stadium for the 2022 FIFA World Cup are abhorrent,” Ferrer said.

The group said it believes Clinton should take responsibility for the violations because she serves on the Weill Medical College Board of Overseers at Cornell, which makes important decisions regarding the medical school campus in Qatar.

Despite interruptions, Clinton remained calm and collected throughout the event, opening up the event for dialogue on the issues.

“She invited — honestly invited — the protesters to stay and ask her questions,” Henderson said.

Clinton commended the protestors, regarding them as an integral part of the political process.

“We don’t live in a single-issue country,” Clinton said.

She also encouraged those who felt strongly about issues, including the protestors, to run for local office.

“Historically in our local elections, if we reach one-third of registered voters, it’s a strong showing,” Clinton said. “It really matters who is in office at every level.”

Following the event, she said she thought both Clinton’s speech and the protests made the event more successful.

“I thought the event was wonderful, and I thought it was a real example of what’s great about our country: that we have all voices at the table,” Burke said. “The way Chelsea handled the conversation that some protesters wanted her to address was perfectly done.”

This is not the first time Clinton has campaigned for her mother, also rallying support for her in 2008. According to NBC News, Hillary Clinton leads Bernie Sanders nationally by two points in the Democratic presidential race. Clinton currently has support from 50 percent of Democratic primary voters, while Sanders has support from 48 percent.