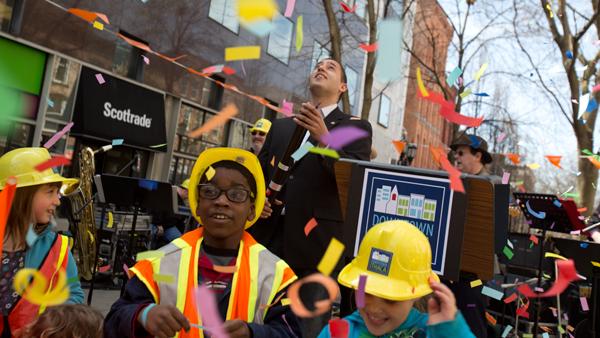 Nearly 100 people gathered during 70-degree weather Monday on The Commons, where confetti flew and children sang “Bob the Builder.” The celebration officially marked the launch of the much-awaited Ithaca Commons redesign project.

Project Manager Michael Kuo said construction work on The Commons will officially commence Monday. Renovations will repair failing infrastructure and improve the aesthetics of The Commons.

The City of Ithaca began working with Boston-based design firm Sasaki Associates in July 2009, which is when the initial public workshop was held. Since then, Sasaki has worked with a 15-member committee — appointed by the mayor — to assess concerns of the public.

Kuo said so far, the city has removed several structures of importance that will later be incorporated into the final design.

“The city has been going through and salvaging anything that they felt is reusable, as well as trying to get precious public artwork out of harm’s way,” he said. “There are couple of sculptures that were presently in The Commons and we have moved to an off-site location.”

These sculptures include the MLK memorial structure and the Child of Ithaca memorial. The Department of Public Works has also removed the roofs of several pavilions on the Commons that will be reused by the city.

Gary Ferguson, executive director of the Downtown Ithaca Alliance, opened Monday’s event, saying the project is an important milestone. He said 40 years ago, city and civic leaders had come up with a visionary plan to remove cars from the city’s busiest street to create a car-free pedestrian mall.

“Here we are again, nearly 40 years later, city and civic leaders have once again come together, this time in the midst of a great recession at a time when deciding to move forward with a Commons rebuild project was as politically difficult as it could have been,” he said.

“Svante immediately understood and appreciated the economic and symbolic value of rebuilding the Commons,” he said. “First in his campaign and thereafter in his administration, Mayor Myrick has led the way for downtown revitalization. When people questioned where the money would come from, Svante simply rolled up his sleeves and the results speak for themselves.”

Myrick said the project will cost the city $10 million. He also said they will take measures to ensure businesses are not affected by construction work.

“It’s an expensive project, because it’s an extensive project,” he said. “We are replacing not just the surfaces but all of the utilities. We are going to do it in the most careful and deliberate way possible so that all of these businesses on The Commons can stay open for business and continue doing business for the entire time the construction is happening.”

Joanne Lamoureux, store owner of the Pack ‘n Ship store on The Commons, said she expects the construction work to affect her clientele.

“This is exactly what the governor is looking for, a project that’s ready to go, that needed that last dollar of state funds to make it work,” he said.

Sara Lattin, representative for O’Mara, said the senator is looking forward to the redesign and rebuilding of the Ithaca Commons.

“Senator O’Mara shares your excitement at the rebuilding of the heart and soul of this community and this county’s civic life,” she said. “The Commons is … one of New York state’s unique places, and we are glad to have this chance to say congratulations on this kickoff to making it an even better and more exciting place for everyone who calls Ithaca home and the many, many visitors.”