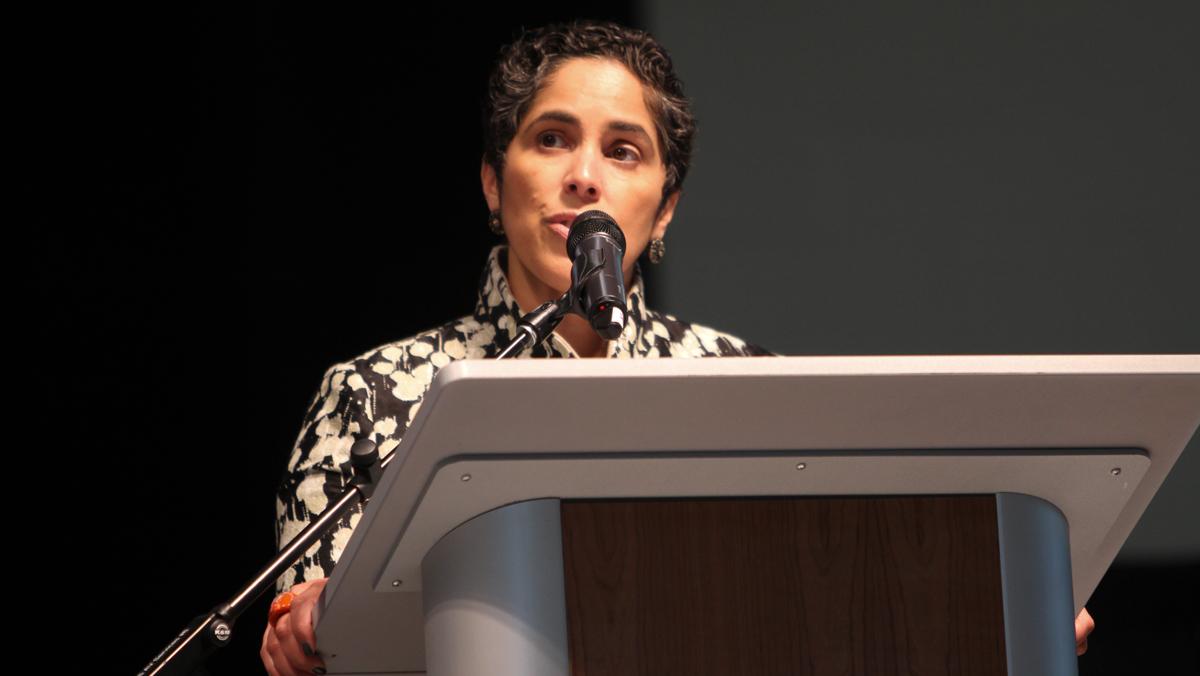 Ithaca College President Shirley M. Collado reflected on her first semester as president, addressed the recent revelation of her 2001 sexual abuse conviction and discussed her goals for the spring semester at the All-College Gathering on Jan. 26, which was attended by students, faculty and staff.

Collado started her approximately 27–minute speech by addressing the news that in 2001 she pleaded no contest to a sex abuse charge after a former patient of hers claimed she and Collado had entered into a monthslong sexual relationship that started when Collado was the patient’s therapist. Collado said that she acknowledges the campus community is having difficult conversations about her past and that she is open to having honest and respectful dialogue about the topic.

“You may be questioning my commitment to supporting and respecting individuals with mental illness or survivors of abuse,” Collado said. “You may be questioning my ability to empathize with those in crisis. I’d like to reiterate today my complete commitment to ensuring the respect and understanding for all individuals, without reducing them to their most visible labels, diagnoses or social markers.”

Stickers that said “President Collado has my full support” were handed out at the entrance of the Athletics and Events Center by Sybil Conrad, assistant director of Campus Center and Events Services, and others.

Collado said that she understands that critics may think that individuals with complicated pasts do not deserve leadership roles but that she is aiming to be a leader who is a whole person.

“I stand here with you, continuing to have the courage to share with you who I am as a person and certainly as your leader,” she said. “I’m asking all of you to be courageous with me. To understand and embrace not only my complexities, but those of our colleagues, those of our students, those of our community members.”

Collado also recapped the initiatives she launched during her first semester as president. She mentioned her creation of two administrative positions and the subsequent hiring of Paula Younger as executive director for government and community relations and Rosanna Ferro as vice president of the Division of Student Affairs and Campus Life.

The strategic plan was another focus of Collado’s speech. Collado said she will launch the formal planning process for it in August with the goal of creating a five–year plan that will begin in the 2019–20 academic year. Collado emphasized the importance of including the local community in parts of the strategic planning process to strengthen the college’s relationship with the community.

Collado also talked about the importance of developing a financial plan independent of student enrollment.

“We want to be an institution … that is financially sustainable and at its core, deeply student–centered,” she said.

The recipients of the Seed Grant Initiative were presented by Melissa Daly, chief of staff in the Office of the President, and Jason Freitag, associate professor in the history department, both of whom were members of the review committee for the grant. The grant, announced on Nov. 30 by Collado, is a one-time opportunity grant for teams led by a faculty or staff member to create an interdisciplinary project. Of the 54 proposals, 13 proposals were each given a portion of the overall $104,000 grant to begin their project proposals.

Two of the recipients presented on their project proposals. David Prunty, executive director of auxiliary services, presented his grant initiative, Monthly Campus Connections — Pop Up Pubs, which is intended to encourage faculty and staff to engage in social activity and conversation outside of the classroom.

Prunty said his team decided to create this initiative as a result of casual conversations among faculty and staff during a reception in Fall 2017.

“We had a moment, and we said, ‘You know, we should do this more often’ and create unstructured opportunities for faculty and staff to come together and just talk,” Prunty said.

Julie Dorsey, associate professor in the Department of Occupational Therapy, discussed prominent issues women face while trying to advance their careers, which led her to create her initiative, Advancing Mid-Career Women’s Leadership.

Dorsey said she is excited to begin using the grant to fund workshops to create a culture of mentorship for midcareer women.

“Our goal from the broad outset is to build a group of midcareer women to support each other,” she said.

The All-College Gathering ended with a panel held by Chris Biehn, vice president of College Relations and Advancement, which included Ferro; Elizabeth Bleicher, associate professor in the Department of English and director of the Ithaca College Exploratory Program; junior Joe Anthony Cruz; and Anne Woodard, associate director of Student Financial Services. The panel discussed what they saw as accomplishments from the previous semester and their goals for the future of the college.

Junior Mariah Lyttle said she was most excited to learn about Pop–Up Pubs, since the initiative will create a chance to meet people on campus from different schools.

Sarah Grunberg, lecturer in the Department of Sociology and member of the Leadership Committee of the Ithaca College Contingent Faculty Union, said she came to the meeting to be a part of the inclusive event and to hear the vision for the college.

Junior Lindsey Davis said she was abroad during the fall semester and attended the meeting to be introduced to Collado and get an update on the college’s initiatives.

“I trust that her intentions and motivations are completely where they should be for the president of a college that is in an unique place in advancement,” Davis said.