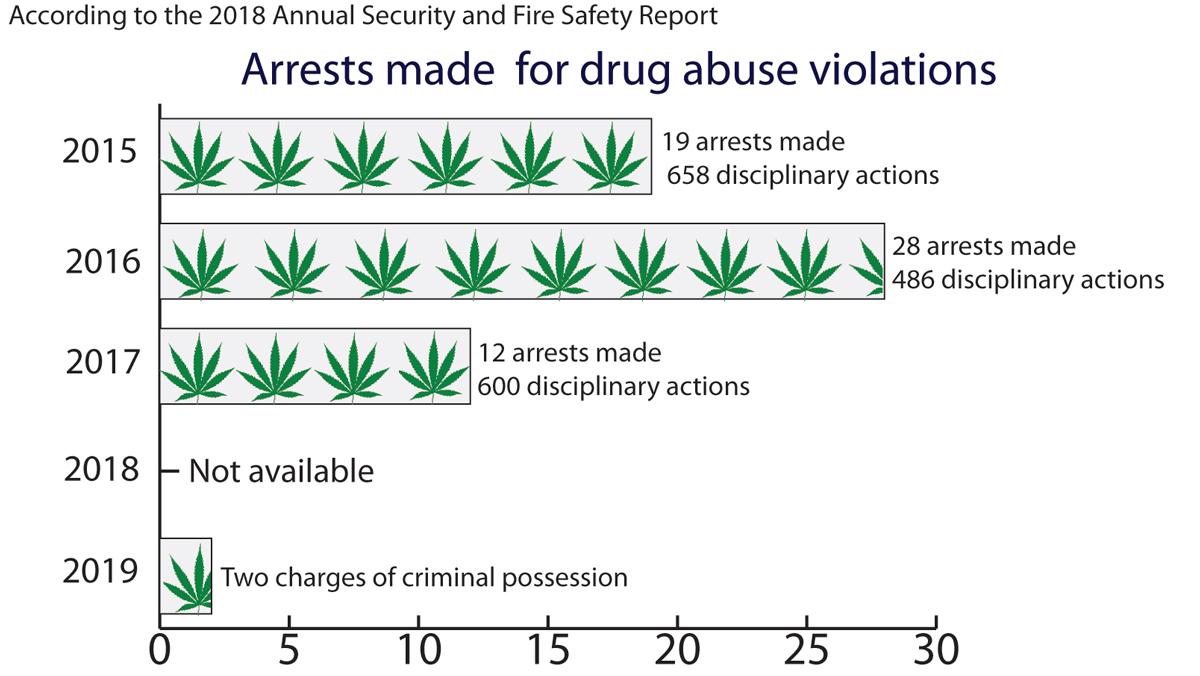 Anna Costa/The Ithacan
In 2019 so far, there have only been two charges of criminal possession of marijuana that occurred in February, according to the Daily Crime and Fire Logs.
By Falyn Stempler — Senior Writer
Published: September 12, 2019

Ithaca College will be adhering to a new law implemented in New York state, which has decriminalized marijuana, making all charges of 25 grams or less only a ticketable offense.

Individuals — including students — will have previous charges expunged from their criminal records.

The law, which took effect Aug. 28, still states that marijuana is illegal, but it changes possession of 25 grams or less from a misdemeanor or felony — which can result in up to 90 days in jail — to a ticketable offense. Ticketable offenses do not go on criminal records, and they include a fine under $200. For context, the average joint contains 0.32 grams of marijuana. As a result, law enforcement, including the college’s Office of Public Safety and Emergency Management, will continue responding to all calls and situations involving marijuana, Tom Dunn, associate director of Public Safety, said.

“In my eyes, the law is the law, and we enforce the law,” Dunn said. “It doesn’t have an impact on us one way or the other. I think if you’re just changing it from a misdemeanor to an infraction, like a stop sign or speeding, we enforce infractions.”

Usage of marijuana is at an all-time high among college students, according to a new report from the University of Michigan’s annual Monitoring the Future Panel Study. In 2017, 38% of full-time college students reported using marijuana at least once in the past year, and 21% reported using the drug at least once in the past 30 days, according to the study.

Marijuana is also the most commonly used illicit drug among college students, according to the U.S. Department of Justice’s Drug Enforcement Administration. One in every 22 students uses the drug daily or almost daily, according to the same study.

Ithaca College consistently ranks among the top schools for “Reefer Madness,” commonly dubbed a stoner school, according to the Princeton Review.

For first-time offenders, court proceedings often result in fines that vary in price based on the amount of marijuana the defendant possesses, Dunn said. Possessing between 25 grams and eight ounces results in a fine ranging from $500 to $1,000 with three months to one year in jail and a misdemeanor classification. All charges with higher amounts are felonies.

Senior Bronzert Pedulla-Smith said Public Safety found him and friends with marijuana in their possession in the Ithaca College Natural Lands during his freshman year. He said he had the charges dropped after making a case to the Office of Judicial Affairs, therefore avoiding an appearance and charge from the Town of Ithaca Court.

Although the law change will not be impacting him, he said it will benefit his friends and others who were charged with possessing 25 grams or less. He said he thinks the law does not go far enough because he believes marijuana should be legalized.

Junior Elliott Weil said that while he has not been ticketed or arrested for marijuana, some of his friends have. He said he is glad the college decided to adopt the policy change.

“I think it’s a good change for the state and country,” he said. “It’s definitely a good idea for IC to embrace the law change. Through directly and publicly embracing the change, IC is taking a stand against the racist and problematic criminal justice system in this country.”