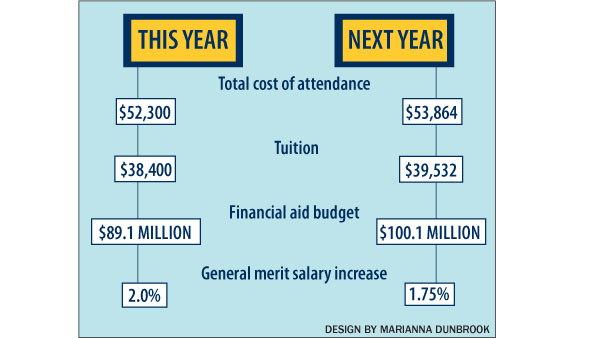 “[We recognize] the need to do more than we have done in the past to keep Ithaca College affordable and see a lower tuition increase,” he said.

The operational budget of $232.7 million for the 2014–15 fiscal year was approved at a meeting of the Ithaca College Board of Trustees in Los Angeles on Feb. 20. Of this total budget, $100.1 million has been allocated to financial aid. This is an increase of $11 million from last year. It translates to $16,729 per student next year, compared to $15,548 per student this year.

The budget also designates $5 million for IC 20/20 initiatives, such as the First-Year Residential Experience and the Integrative Core Curriculum.

Rochon said projected savings from the college’s strategic-sourcing plan were included in the budget. The plan is a centrally coordinated approach to purchasing goods, such as office and cleaning supplies, and services that are not construction-related.

“A number of announcements that we have already made about strategic sourcing, for example, are assumed to yield some significant benefits, beginning next year,” he said. “We haven’t necessarily realized those benefits yet, but we fully expect to.”

Rochon said in regard to the college’s plan to keep tuition increases close to inflation rates, there is still more work to do.

“The rate of inflation right now is running a little bit under 2 percent,” he said. “So we recognize that we still want to shrink that rate of tuition increase in future years. We project that we will be able to do so.”

Gerald Hector, vice president of finance and administration, said one of the primary goals while defining the budget was to slow the rate of tuition growth without sacrificing any instructional or academic capabilities and student life activities.

“We are moving toward a more structured approach,” he said. “Hopefully over the next several years, that will continue this trend.” Hector said the budget was designed to ensure faculty and staff salaries remain competitive.

“[One objective is] to attract and retain the best talent for our faculty and staff, and that means making sure that our salaries and benefits remain market-competitive, which this budget also does,” he said.

The board approved a salary pool, the funds designated for performance-based pay to employees, of 2.75 percent, or $2.6 million for next year. This is up 0.25 percent from last year.

Included in this 2.75 percent is 1.75 percent that will be allocated for full general merit, which is the percentage increase given to employees whose on-the-job performance has been effective throughout the year. This is a decrease from last year’s 2 percent for general merit.

Employees who have performed at an exceptional level will be eligible for a 0.75 percent additional merit for next year. Rochon said this percentage can further increase basedon performance.

“A lot of times, people think, ‘If I am really an outstanding performer, the best I can get is 2.5 percent, whereas if I am just a fully acceptable or capable performer, I get 1.75 — that’s not a very big difference,’” he said. “But the difference can actually be large, because that 0.75 is not spread among everybody. It’s spread among those people who are exceptional performers.”

Both these merits depend on the employees’ annual performance reviews conducted by their supervisors.

This year’s budget for the first time also sets aside 0.25 percent to provide an additional increment for employees who earn less than $45,000. A total of $259,000 was allocated to be divided across employees who fall into this salary bracket; each will receive a $500 increase to their base pay, according to an email sent out to staff and faculty the evening of Feb. 26. The email was sent to The Ithacan by an employee who did not wish to be identified. Calculations based on this email imply 518 employees will receive this extra payment.

Peter Rothbart, chairman of the Faculty Council and professor of music theory, history and composition, declined to comment on the reduced full general merit increase. However, he said he commends next year’s budget allocation for low-earning employees.

“I think this is a clear case of the administration responding constructively to faculty and staff concerns,” he said.