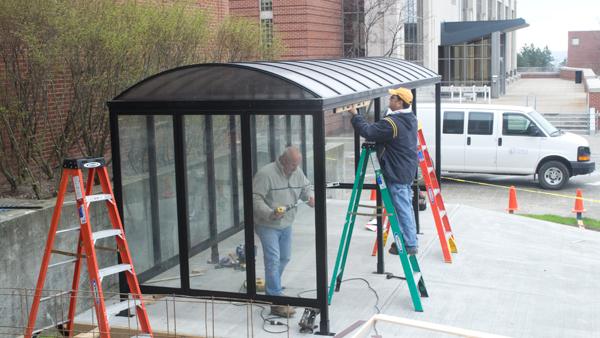 Jennifer Williams/The Ithacan
From left, Smitty James and Mike Whane work on the Bomber Bikes shelter outside of Williams Hall. Now completed, it holds up to 16 bicycles.
By Lisa Famularo — Staff Writer
Published: May 2, 2013

As the academic year comes to a close, college officials are shifting their focus toward summer construction projects that will take place across campus.

The construction projects include the installation of a bike shelter, renovations to the Hill Center and building a new converged media space. Steve Dayton, director of facilities planning, said other projects planned for this summer include boiler replacements around campus, residence director apartment renovations and a sizeable project in the James J. Whalen Center for Music, involving a revamp of Ford Hall. All of these summer renovations are expected to amount to about $4 million.

Located outside of Williams Hall, the Bomber Bikes shelter, which will house up to 16 bikes, was recently completed. Lauren Goldberg, president of Bomber Bikes, said the idea for the project came from faculty who are bike enthusiasts and who ride their bikes to campus.

Bomber Bikes submitted a capital request proposal, which was approved by Carl Sgrecci, vice president of finance and administration, Goldberg said. The shelter itself is a commercial model from Velodome, a vendor of bicycle parking systems, shelters and racks. The shelter construction project cost $1,600.  A ribbon-cutting ceremony will be held at noon Tuesday.

“[The purpose is] also just to convince people that bikes are really awesome,” Goldberg said. “It can be just as fun riding a bike when you’re 22 or 23 as it was when you were 7 or 8 years old. We’re really just hoping to promote bike culture on campus and support those cyclists who are already looking to ride their bike to campus.”

The bike shelter is meant for short-term storage for bike commuters in particular. Goldberg said Bomber Bikes also provides indoor long-term storage for students who want to keep their bikes out of the weather for a long period of time. Storage costs $15 during winter break through the end of spring break or $10 for storage either just through winter break or from Jan. 20 through the end of spring break.

Richard Couture, associate vice president of facilities, said the Hill Center was at the top of the list of buildings that needed renovations.  This is what the college is focusing on now that the new construction of the School of Business building, the Peggy Ryan Williams Center and the Athletics and Events Center is complete. Couture said the project is following the original planned budget of about $15.5 million and is still on schedule to be finished by the end of December.

In response to the complaints about the noise and the dust, Couture said facilities is trying to take as many precautions as possible. There were protective plastic walls put up to prevent dust from getting into the occupied areas of the building, many occupants have been relocated to Terrace 13 and the contractor was asked to rearrange certain aspects of the construction schedule to minimize noise as much as possible.

“We’re going to add classrooms, multipurpose rooms that don’t exist right now,” Couture said. “We’re going to be converting the old indoor pool area to a very large athletic training area that will be used both by the athletic department and the school of HSHP, so I think that will be a very nice facility.”

Couture also said the renovations to the electrical system, the plumbing system and the heating and air conditioning systems in addition to the new exterior on the building will improve the energy efficiency and reduce utility costs of the building dramatically.

The Roy H. Park School of Communications will also undergo renovations this summer, Dayton said. The office for The Ithacan will be moved from its current location in Park 269 to the Northeast corner of the building, taking over rooms 219 and 220. It will also be a collaborative space with ICTV. The old office of The Ithacan will be converted into a classroom. The project is expected to begin in June and be completed by August.

Dayton said students and faculty that he has spoke with support the renovations.

“Everybody that we’ve talked to when we were setting this up was all for it,” Dayton said.