A few minutes before the Tompkins County Legislature voted 11–3 against a proposed moratorium postponing the planned expansion of the county jail the evening of Feb. 18, Ithaca College junior Kayla Young got off her seat and admired her large, yellow poster, hanging behind her.

“We are all affected, we are all connected,” it declared, alluding to the mass effects of a jail expansion.

As one legislator gave a final explanation for her nay on the moratorium, Young began removing the tape that held the sign in place to roll it up. She said she knew it was over; the moratorium would not pass.

“I didn’t want to wait until they voted ‘no,’ which I already knew, and then take the sign down and have [one of the legislators] help me,” she said. “Don’t help, you don’t believe in this sign, don’t touch my sign.”

That night, she, along with about 70 other community members, crammed in the Legislature Chambers. Most stood the entire meeting, holding 10-foot-long posters with creative rhymes urging legislators to reconsider the jail expansion. 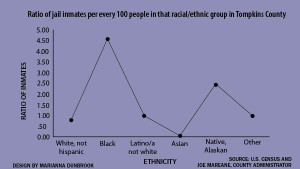 Last fall, the Tompkins County Legislature unanimously approved a more than $900,000 county jail expansion project that includes the addition of seven beds and other renovations. Total projected costs for the expansion, however, are still being computed. The jail currently accommodates more than 90 inmates, exceeding the 75 inmate capacity, and the project was triggered by state pressure to take steps for increasing the capacity, County Administrator Joe Mareane said at the meeting.

With the expansion approval last fall, local groups began to challenge the legislature’s decision. Young is one of about 10 students from the college who are part of the Stop the Tompkins County Jail Expansion Coalition, a diverse group of Ithaca residents that stemmed from the Shawn Greenwood Working Group last fall, Paula Ioanide, assistant professor for the Center for the Study of Culture, Race and Ethnicity and a leader in the coalition, said. The coalition aims to end the perpetuation of the “New Jim Crow,” or the systematic oppression of poor people and people of color through mass incarceration.

Young, who is originally from New York City, said she is invested in the coalition’s movement because it is personal to her. She has family members who have had negative experiences in the justice system, both as inmates and as part of the law enforcement, she said.

“It has had a major impact on my psyche, which is one of the reasons why I have trouble sleeping at night, because it’s close to home,” she said.

County leaders have argued the project is cost-saving because it reduces the number of “board outs,” or inmates sent to other jails because of limited space. In the last two years, board outs have cost the county about $245,000 each year.

Several legislators including Legislator Brian Robison, who voted against passing the moratorium, expressed concerns with board outs, which often place inmates far away from their families, and those who stay sometimes have to sleep in bunk beds in rooms originally built for one person.

What the coalition argues, Ioanide said, is that no one knows for a fact that there will actually be a need for the additional beds, but if more beds are added, she said, research shows they tend to be filled.

To these claims, which were echoed by the public that spoke at the meeting, several legislators responded with sympathy, but were not convinced to reconsider.

According to 2013 county jail statistics, white non-Hispanics make up 68 percent of the inmate population, blacks make up 22 percent, Latino/as make up 5 percent, Asians make up 0.5 percent, Native and Alaskan people make up 10 percent and 3.4 percent identified as other.

When the numbers were proportionately compared to the Tompkins County population census data, it showed that less than 1 percent of white people were inmates in 2013, whereas, 5 percent of black people, 1 percent of Latino/as, 0.05 percent Asians, 2 percent of Natives or Alaskans and about 1 percent other were inmates that year. 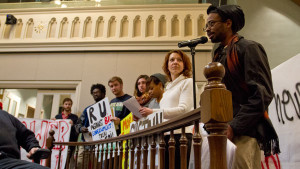 The moratorium, which was submitted by Leslyn McBean-Clairborne, a legislator and the deputy director of the Greater Ithaca Activities Center, was meant to give the expansion project a one-year delay to allow a task force formed by the Public Safety Committee to present findings and alternatives to incarceration before the legislature made a decision on the jail expansion. McBean-Clairborne also reminded the public that the county has been “at the cutting edge of counties” finding incarceration alternatives and continues to support those types of programs. The dismissal of the moratorium means the county will bond the project some time this year, she said.

For about two hours, locals and students from both the college and Cornell University took the microphone to express their concerns about the expansion. They pleaded with the legislature to “think outside the box” and find creative alternatives to incarceration rather than expanding the jail. Emotional speeches brought tears to some, and a spoken-word-like performance by a group of Ithaca College students and Ioanide sparked spirited applause.

“Students always, always have been at the forefront of movements, and in part the reason for that is that they are always better at being youthful and not going through the same, old tactics,” Ioanide said. “Creativity is involved in organizing, coming up with different ways of saying the same thing, reaching people’s hearts. Youth have a kind of innovation spirit that is a beautiful thing to watch.”

But the air was thick with tension at the Legislature Chambers, and several times, Michael Lane, chair of the legislature, interrupted community speakers to remind them of their three-minute limit and demand they tone down their comments and criticism. The public retaliated with a few interruptions during the legislators discussion.

“Politics is always messy, it is always chaotic,” Ioanide said.

Senior Allison Currier, who participated in the group presentation, said students, as temporary residents, benefit from the Tompkins County community and therefore have a responsibility get involved in community issues. Speaking in front of the legislature was an opportunity for her to exercise her influence and participate, she said.

“I felt at home,” she said. “I felt really empowered when I was there, and I felt like I was standing and holding signs with people that I’m really excited to continue working with.”

Ioanide said the significance of student involvement cannot be underestimated.

“It’s where everything that people learn in the classroom abstractly becomes real,” she said. “[Students] find themselves, and they find an enormous level of empowerment to understand how much they can contribute if they want to.”

Young is one of those students.

“I always had a stutter as a little kid, and I learned how to talk in the community in front of common councils, in front of county legislators,” she said. “That is were I really found my voice.”

Despite the dismissal of the moratorium, Ioanide said the coalition will continue to fight the expansion.