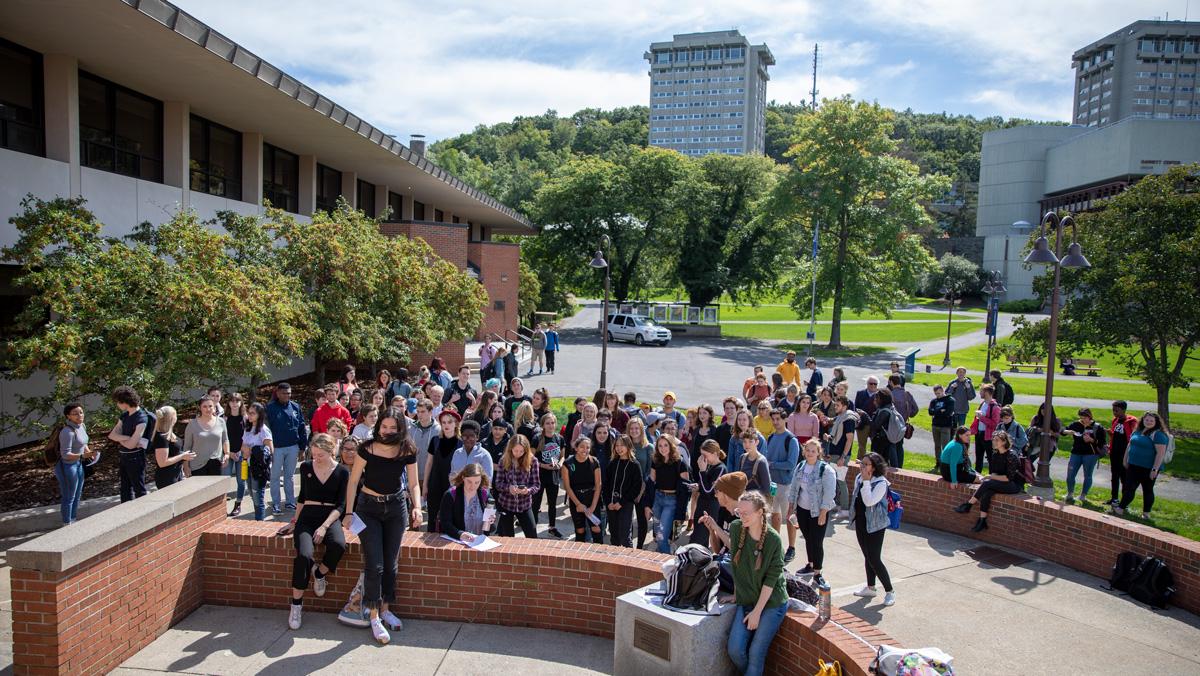 Elias Olsen/The Ithacan
Approximately 50 students attended the event, which took place at Free Speech Rock outside of Campus Center at 1 p.m., to show their support for Christine Blasey Ford, who came forward with allegations that Kavanaugh attempted to sexually assault her, and Deborah Ramirez, who claims Kavanaugh exposed himself to her at a party.
By Alexis Manore — Staff Writer
Published: September 25, 2018

Students walked out of classes and gathered in support of sexual assault survivors — specifically for two women who accused Supreme Court nominee Brett Kavanaugh of sexual assault — for the National Walkout and Moment of Solidarity at Ithaca College hosted by the college’s chapter of Planned Parenthood Generation Action on Sept. 24.

Approximately 50 students attended the event, which took place at Free Speech Rock outside of Campus Center at 1 p.m., to show their support for Christine Blasey Ford, who came forward with allegations that Kavanaugh attempted to sexually assault her, and Deborah Ramirez, who claims Kavanaugh exposed himself to her at a party.

Ford claims Kavanaugh and his friend Mark Judge attempted to assault her at a party they attended in the summer of 1982 when she was 15 years old.

She alleges that Kavanaugh pushed her into a bedroom and pinned her down on the bed with his hand over her mouth to keep her from screaming. Ford managed to escape when Judge jumped on top of them.

Ford is expected to testify about her allegations against Kavanaugh before the Senate Judiciary Committee in a public hearing Sept. 27.

Ramirez claims Kavanaugh exposed himself to her during her freshman year at Yale, which she and Kavanaugh attended at the same time.

She says the incident occurred at a dorm party, and that she and a group of people were playing a drinking game, and she quickly became incapacitated from the alcohol she had consumed.

Ramirez alleges that while she was lying on the floor, Kavanaugh exposed himself in front of her face and that onlookers taunted her as she showed obvious discomfort. When he pulled his pants up, Ramirez says she saw him looking down at her while laughing and later heard students discussing the incident.

Ramirez is calling for an FBI investigation about Kavanaugh’s involvement in the event.

The walkout was held in partnership with the founder of the #MeToo movement, Tarana Burke, who called for the nationwide walkout in a tweet Sept. 22.

Senior Tatiana Jorio, president of Generation Action, led a moment of silence in solidarity at Free Speech Rock for survivors of sexual assault. She also handed out slips of paper with information about how to contact senators to protest Kavanaugh’s nomination and led a chant of “We Believe Survivors.”

Jorio said the walkout was held to support survivors of sexual violence and to protest the nomination of Brett Kavanaugh.

Jorio said sexual assault is a campuswide and nationwide issue and that many instances go unreported.

“It’s easy to sort of pretend this doesn’t happen when you’re not seeing the report,” Jorio said. “But this is us saying that if you’re reporting 30 years later like Christine Ford is, it doesn’t matter how much time has passed. We still believe you and IC Planned Parenthood Generation Action is here to support all survivors.”

Sophomore Chanel Courant said she came to the event because she believes in the importance of feminism and standing in solidarity with those who have experienced sexual assault.

“I feel really passionately about these issues and feminism,” Courant said. “It’s really important that we show solidarity.”

Freshman Julia Ganbarg said she participated in the walkout because she thinks college students need to get involved with prominent issues facing the United States.

Sophomore Autumn Stevens said she attended the walkout because she believes in standing up for women’s rights.