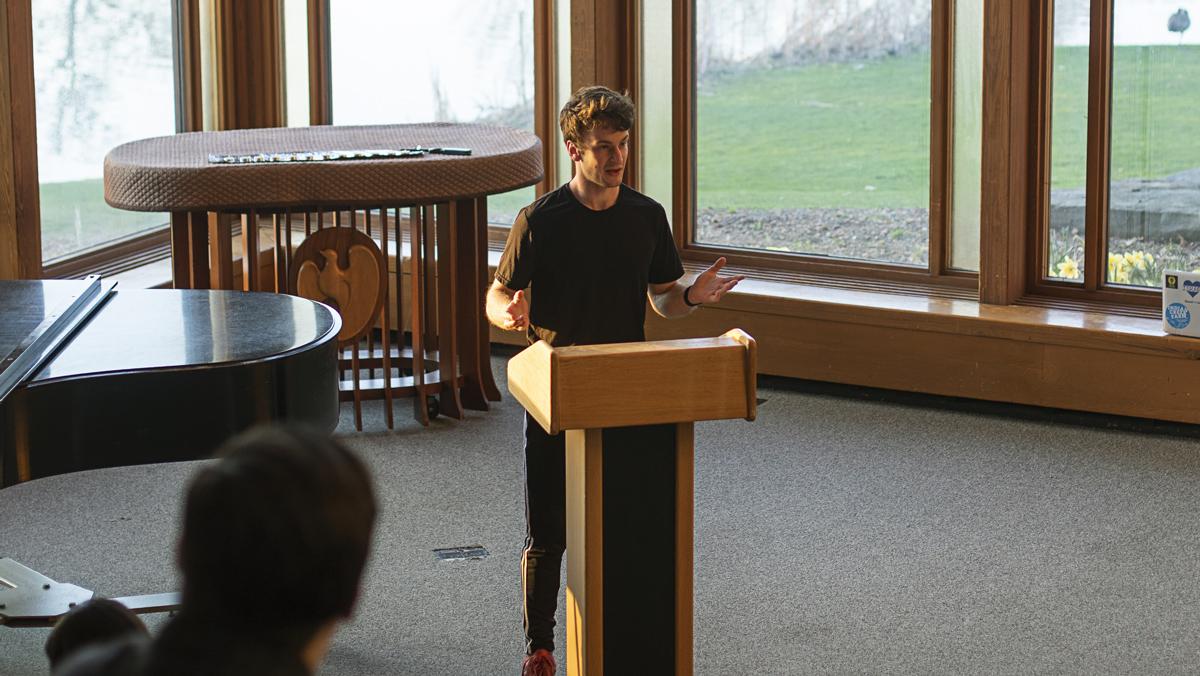 Student Alliance For Israel (SAFI), a club at Ithaca College, hosted the college’s first Holocaust memorial service April 22 in Muller Chapel. Approximately 25 members of the college community gathered to commemorate the groups of people who suffered during the Holocaust.

The memorial was centered around the six million Jews who were murdered by the Nazi regime but also aimed to include the commemoration of the other six million people belonging to different victimized groups. These groups included LGBTQ people and those who were disabled. The event also allowed the audience to light 12 candles, each candle representing one million of the total 12 million Holocaust victims. The memorial also featured musical performances, community speakers and a moment of silence for those who suffered in the Holocaust.

Sophomore Sam Haney spoke at the event about the LGBTQ victims of the Holocaust. Haney said that between 1933 and 1945 an estimated 100,000 gay men were arrested for their sexual orientation. He emphasized that an estimated 1,500 to 5,000 of those men were held in Nazi concentration camps. Haney said it was not until the 1980s that governments began to recognize that the LGBTQ community was affected by the Holocaust, and it was not until 2002 that the German government apologized formally to the community.

These stories were told by senior Benjamin Laufer and event leader junior Orian Fitlovich. Laufer’s story was an account from his grandfather that focused on Kristallnacht, also called the “Night of Broken Glass.” Kristallnacht took place in Germany in 1938, and German soldiers and civilians burned and vandalized Jewish synagogues, businesses and property. In addition to the destruction of Jewish property, 91 Jews were killed that night. His grandfather was living in Germany where Kristallnacht took place and his family owned a popular restaurant at the time. The restaurant escaped vandalism due to its location underground. The story also included his grandfather’s account of seeing Adolf Hitler on the streets of Germany.

Senior Cam Fuoti attended the event and said that the part of Laufer’s grandfather’s story, in which he actually saw Adolf Hitler on the streets of Germany in person was uniquely riveting for him.

Fitlovich told the second story of the evening. The story was about her grandfather, Avraham Fitlovich, who wrote a book detailing his firsthand account of the Holocaust. Avraham Fitlovich’s book included his escape from two Nazi labor camps. The book is written in Hebrew, and its translated title is “My Past Lies Within Me.”

Fitlovich said her grandfather wanted people to remember that these stories are real, that they happened and that people need to do everything they can so that such an event does not happen again.

Senior Andrew Diamond said he thought Fitlovich’s story was one of the most emotional parts of the service. He said the most moving part of the story for him was when Fitlovich’s grandfather saw a baby that was trying to wake up their dead parents while walking through a field of dead bodies known as the “killing meadows.”

Freshmen Brett Gasmer said he found the candle lighting and the Hatikvah to be the most emotional parts of the event because of his personal connection to the Holocaust.

“I felt like I was doing this for my family and my ancestors,” Gasmer said.

“In a divisive time where everyone is on one side of an issue or another, it is difficult to have a dialogue,” Fitlovich said. “It’s not just about the Holocaust. It’s about fighting what’s happening today and fighting for acceptance and peace for everyone as a whole.”