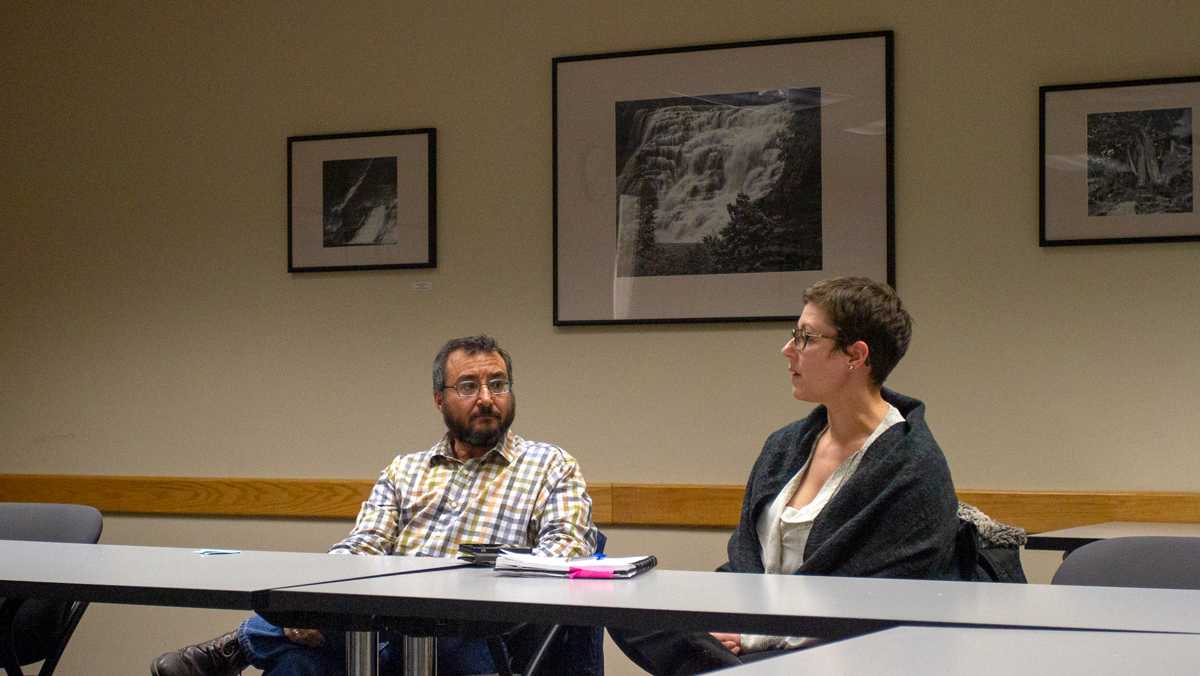 Jackie Marusiak/The Ithacan
Luca Maurer, director for the Center for LGBT Education, Outreach and Services, and Sihaya Moraleda, counselor in the Office of State Grants, discuss their concerns during a forum held by the search committee for a new vice president for marketing and enrollment strategy.
By Alyshia Korba, Sam Haut — Staff Writers
Published: March 27, 2019

The search committee for a new vice president for marketing and enrollment strategy held open listening sessions for Ithaca College students, faculty and staff at 4 p.m. March 25 in the Ithaca Falls Room and at 12:10 p.m. March 26 in Williams 314.

The listening sessions were open to anyone in the college community and served to gather feedback about what qualities community members value in a marketing and enrollment strategy candidate. Throughout the sessions, staff and faculty shared what they are looking for in a candidate and what their concerns about the position are.

The vice president for marketing and enrollment strategy oversees undergraduate and graduate admission, analytics and institutional research, student financial services and institutional marketing. The position was formerly held by Gerard Turbide, who resigned in January 2019. The sessions were hosted by the co-chairs of the search committee — Linda Petrosino, dean of the School of Health Sciences and Human Performance, and Jeane Copenhaver-Johnson, chair of the Department of Education.

At the March 25 session, two staff members attended, and the search committee asked for their suggestions. Luca Maurer, director for the Center for LGBT Education, Outreach and Services, suggested that the marketing and enrollment strategists should be more aware of how it is using minority groups such as the LGBTQ community in their marketing strategies.

“I know there have been some notable misses when it comes to LGBTQ marketing content,” Maurer said. “I would really love for a person in this role to come in with an idea of both policy and accountability when it comes to issues around diversity and inclusion.”

Sihaya Moraleda, counselor in the Office of State Grants, also brought up concerns about how the Department of College Relations and Communications represents diversity in the admission process.

“As IC is increasingly becoming a more diverse campus, the students are asking and I’m asking what we are doing with that in terms of the admissions and enrollment process,” Moraleda said. “Students often ask, ‘How do I get to be a President’s Host? Because I want to make sure when somebody else applies, they see someone who looks like me.’”

A second session was held March 26 in Williams 314, and two community members attended. This feedback at the March 26 event ranged from a suggesting a redesign of the college’s website to understanding what draws students to the college. Dan Swanstrom, football head coach in the Department of Intercollegiate Athletics, and Catherine Weidner, professor and chair of the Department of Theatre Arts, attended the session.

Petrosino said at the session that the search committee does not have a timeline for when a candidate will be chosen and when an ad for the position will be posted to various job–recruiting websites. Weidner said the candidate must be able to understand what makes the college unique and how it fits into programs offered at particular schools.

“We are a group in a niche market, we are already a small thing and we are a small part of that small thing,” Weidner said. “Having an enrollment person who understands that one size does not fit all, one admissions experience cannot be the same for every major — it’s barely one–size–fits–most.”

Weidner said she would like to see candidates who understand what makes up a good website and wants to make the college’s website more appealing to visitors in order to attract potential students.

“The biggest complaint of everyone is that the college website is just static,” Weidner said. “If you go to any of our competitors’ websites, it looks like a much more interesting place to go to school.”

Swanstrom said he would like to see candidates who recognize the importance of the athletics programs. Swanstrom said he wants the co-chairs to know that sports are an important facet of the college admission process.

“Data also shows the athletics is going to be the front door to your institution,” Swanstrom said. “And what we were when our football program played on ESPN and national championship games, I mean, that is a three–hour advertisement.”

Weidner said she also thinks it is important that the candidate is committed to the college and does not see it as a steppingstone for a higher position. Weidner made it clear to the co-chairs that any potential candidate should be ready to work in this position for a long time and not as a check on their resume.

“The other way I’ll know you hired the right person is if they’re still here in a year,” Weidner said. “I’d like them to give us more than just their personal ladder of success. I would love it if someone just took seriously what it means to be invited into a community of caring people who have the same goals in mind and then said, ‘I’m going to commit to that caring community.’”