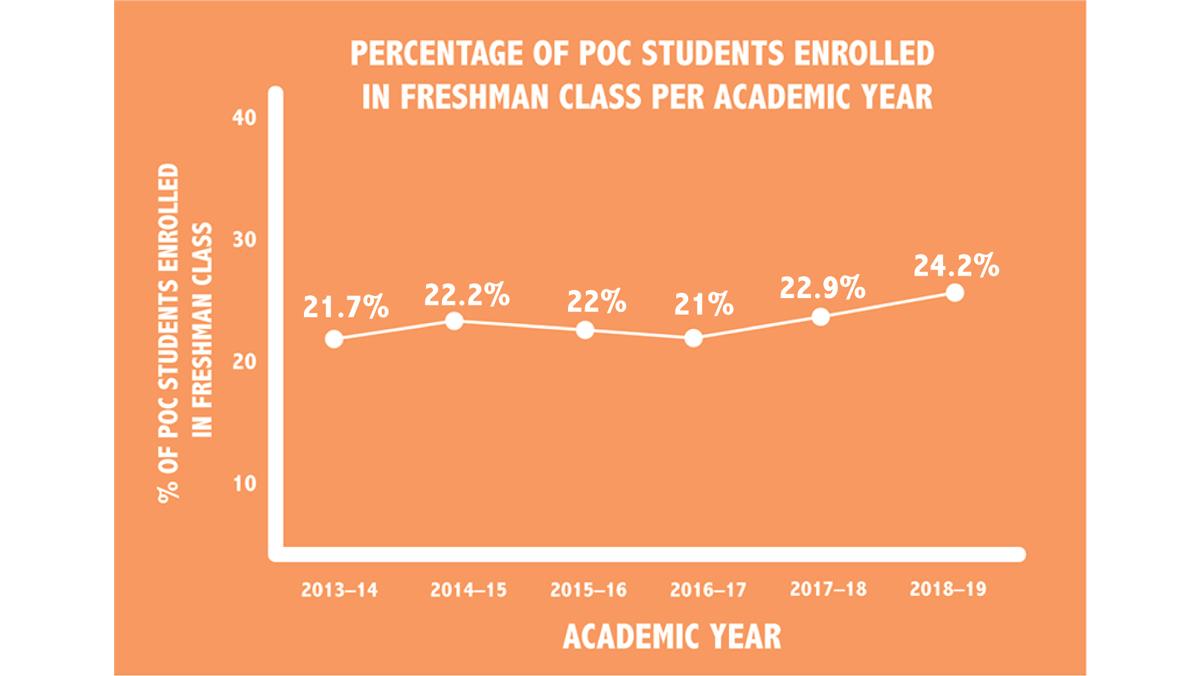 This academic year, Ithaca College welcomed the a freshmen class with the largest percentage of Asian-American, Latino, African-American and Native American students — nearly 25 percent — in the institution’s history.

This increase corresponds with national trends. Higher education institutions across the country, including Ithaca College, are seeing increased populations of students of color on campus, a trend fueled by national demographic changes, experts say. According to the Office of Analytics and Institutional Research, since the 2013–14 academic year — which had a 21.7 percent person-of-color enrollment in the freshman class — the college has increased its ALANA enrollment to 24.2 percent, a 2.5 percent increase over five academic years.

For decades, students of color have been an underrepresented group in education institutions.

And, while representation is increasing, there is still a prominent enrollment gap between students of color and white students at liberal arts institutions like Ithaca College.

In comparison to its peer institutions — small, private liberal arts colleges — the college has a similar representation of students of color in its student body. According to data from The Chronicle of Higher Education from 2016, Elon University had an 80.1 percent white population, Muhlenberg College had 75 percent and Marist College had 71.5 percent. Conversely, other small private liberal arts colleges have smaller white populations, including Fordham University with 52.5 percent and Hofstra University with 54.1 percent. While Elon University, Muhlenberg College and Marist College are in rural areas, Fordham University is in New York City and Hostra University is in Long Island.

Gerard Turbide, vice president of the Office of Enrollment Management, said via email that the Office of Admission has made intentional efforts to recruit a more diverse class of students.

“The college makes intentional efforts to attract and enroll a diverse and talented group of students, such as where we engage in recruitment travel, how we structure our campus visit experience for prospective students and families, and providing financial aid and scholarships to help make an Ithaca College education an affordable investment,” Turbide said.

Nicole Eversley Bradwell, director of the Office of Admission, said the admissions office has focused on recruiting students of color. She said this was a goal established under the former President Tom Rochon’s strategic plan, IC 20/20.

“It’s always been a focus for us to increase the number,” Bradwell said. “In my time here, I have worked with three different college presidents. Our most recent strategic plan, which was IC 20/20 under our former president — part of the goal outlined was to reach 20 percent of student of color, and we reached and exceeded that goal.”

As previously reported by The Ithacan, the Office of Admission prioritizes applicants’ extracurricular activities and the “holistic view” of students’ capabilities instead of college prep courses or overall grades. Bradwell said the college’s admission criteria remains the same. The college does not look at applications based on race. Instead, it looks at students’ overall academic experiences.

“We put most of our emphasis, and have always, on a student’s day–to–day academic profile, Bradwell said. “We look at the level of courses that students have taken in their school. We look to understand the schools that they have come from. We are certainly looking to enroll a diverse class. When I say diverse I mean in every aspect, so students across the nation and across the world had different academic experiences. We have no set percentages or quotas to achieve a particular number. More so, we are looking to recruit and attract students that feel like this would be the best learning environment for them.”

The increase in enrollment of people of color could also reflect changing demographics and an increased overall enrollment. Peace Bransberger, senior research analyst at Western Interstate Commission for Higher Education, said she has noticed this change.

“Across the nation, there have been significant increase in the number of youths who are not white,” Bransberger said. “The greatest portion of that increase is Hispanic youths.”

However, while the number of students of color on campus is rising, some are feeling uncomfortable at a predominantly white institution. The most recent Campus Climate Survey Report released in April 2017 found that students of color did not feel satisfied with the campus. As previously reported by The Ithacan, students said they want there to be more programs that address intersectionality and the complexities of people’s identities, particularly person-of-color and marginalized identities.

In Fall 2015, multiple protests occurred, and were led by students of color who had grievances regarding the administration’s handling of racist incidents that occurred on and off campus. They also criticized Rochon’s leadership. POC at IC, an organization formed in response to racially charged incidents and speech on campus, said it felt its concerns were not being addressed and wanted action to be taken by the administration. Rochon stepped down in July 2017. Similar protests were occurring on campuses across the country because of a general dissatisfaction of people of color at higher–education institutions.

Bransberger said that, with the shift in campus demographics, there might be challenges that schools will face, such as demands for different programs and services. Sean Eversley Bradwell, director of the Center for Inclusion Diversity Equity and Social Change (IDEAS), said the Center for IDEAS was created to address issues experienced by people of color and marginalized groups on campus. It was created as a result of the split of the former Office of Student Engagement and Multicultural Affairs, which now consists of three main offices.

“We can make the argument that this office is a direct response to those claims and those calls by our students to do this work differently,” Bradwell said. “What I’m hoping is that our office is as student-centered as we can be and we work with our students to create the kind of campus culture and climate that they expect at this institution.”

Sophomore Tomas Garcia said he has noticed an increase of people of color on campus which has improved his experience at the college.

“I’m starting to see more POC on campus, and, for me, that’s a huge difference because I feel more comfortable to know that they are people on campus who have dealt with the same struggles as me,” he said.

“I think the school should create events with the purpose of increasing diversity and making sure students of color feel welcomed,” Gray said. “There should be more events that celebrate the work that students of color create.”

Gray said she has also noticed how the community of people of color at the college has grown stronger as the number of enrolled students of color has increased.

“While the POC student enrollment has increased since my freshman year, retention is where the college fails,” Castillo said. “I could name numerous POC students that have left Ithaca College due to the lack of financial and social resources on campus. I think the college should work on keeping these students on campus by implementing programs that provide the support we need.”