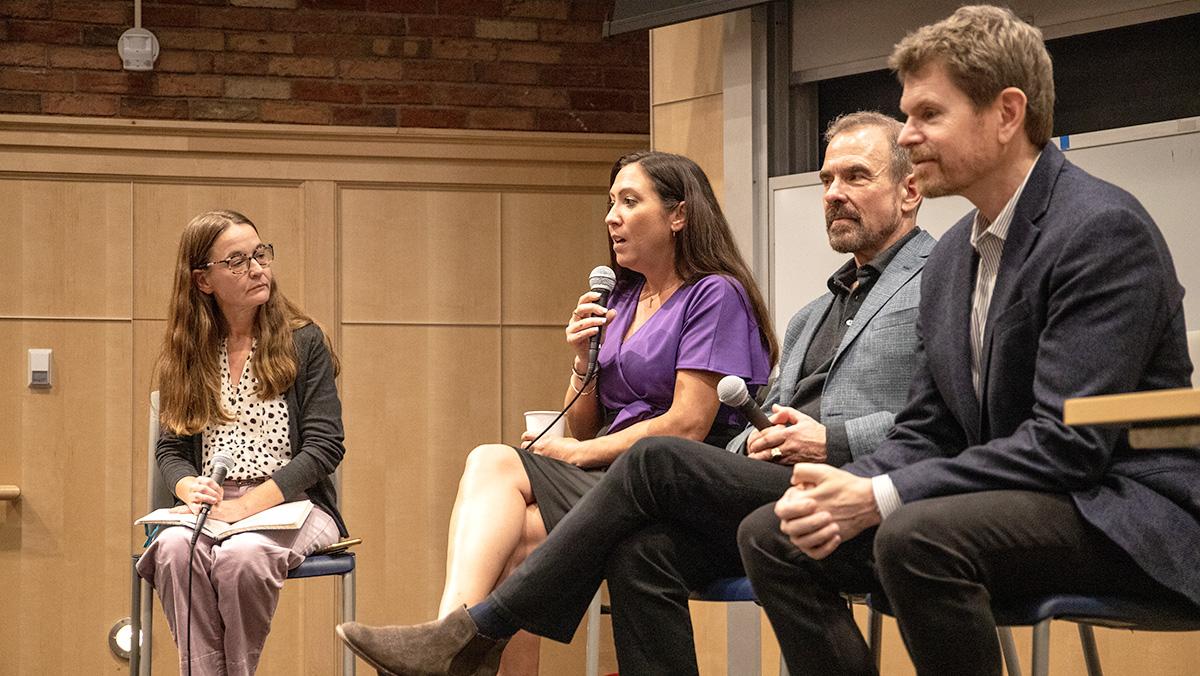 Daisy Bolger/The Ithacan
From left, Elizabeth Bergman, associate professor in the Department of Health Promotion and Physical Education; Becky Preve, executive director for the Association on Aging in New York; and Joseph Applebaum and Stu Maddux, the creators of the film.
By Vivian Rose — Staff Writer
Published: November 8, 2022

Ithaca College’s Gerontology Institute hosted a screening Nov. 1 of a new documentary, “All the Lonely People,” along with hosting a panel to discuss loneliness and methods on how to combat it.

The creators of the film, Joe Applebaum and Stu Maddux, visited the college to speak after the screening of their documentary, along with Elizabeth Bergman, associate professor in the Department of Health Promotion and Physical Education, and with Becky Preve, executive director for the Association on Aging in New York.

The four-person panel discussed a key aspect of the film — how loneliness can cause medical issues — and highlighted how the reduction of isolation, at any age, is necessary for better health.

Tompkins County has its own Office for the Aging, which is a beneficial connection for the college’s Gerontology Institute. The Office for the Aging informed many of the attendees about the event, and participants were not only from Tompkins County, but came from Sullivan, Steuben, Chemung and Herkimer counties. About 200 students, faculty and members of the elderly community attended the event in Textor Hall 102.

Although many of the elderly attendees were a part of the aforementioned statewide Offices for the Aging, they were also members of the Longview Senior Living Community, a retirement community. The college has a partnership with Longview, located across the street from the college. Bergman said 14 participants for the screening of the documentary came from the retirement community, along with 14 people from The Greater Ithaca Activity Center team (GIAC), which is a senior program located in Downtown Ithaca.

Bergman said 115 people of the 200 person crowd signed up in advance for the event.

Students, faculty and members of the greater Ithaca community were invited to attend the screening of the film in person, along with people from counties in upper New York via Zoom.

The social impact documentary deals with the lives of several people who have experienced loneliness all over the world. Through the stories each person conveys within the film, they help explore different solutions to build relations and reduce isolation for viewers who may be having similar experiences.

Many of the stories came from people older than 50, however, during the panel, Applebaum and Maddux said how loneliness affects people of all ages. They reflected this idea by having two 17-year-old teenagers featured in the documentary to tell their unique stories of isolation and loneliness.

About a dozen members of the audience were made up of students from the college, which Bergman said was important for the event.

“We really wanted it to be a multi-generational audience,” Bergman said. “We wanted to reach a lot of different kinds of people because [loneliness] spans the life course. It’s not just an older adult issue. So we wanted to make the event available to the Ithaca College community.”

The event was important for people of all ages, due especially to the findings of the two filmmakers when searching for the topic of their next documentary. In 2018, they sent a survey to about 3,000 to 4,000 people in the local government, health and education sectors from around the globe, and asked, “What is the next big sleeper issue that you see coming over the horizon?”

“We were truly shocked when, by a two to one margin, results came back for loneliness and anxiety as being the next big thing that nobody is really thinking about,” Applebaum said.

The film hit the creators personally. As a couple, their work became their lives and Maddux said there really was not much of a difference. They both noticed that because of this, they too started to become lonely.

“It kind of became our own journey of trying to figure out how we would break our own social isolation and loneliness,” Maddux said.

Once the panel had finished their own discussion, both the in-person and Zoom audience were able to ask questions to the panel.

A Zoom participant from Chemung county asked the panel if they were surprised to see young people in the film to be just as lonely as the older people featured in the film. Preve responded by describing how communication has changed since COVID-19 and has hit the younger generations quite hard.

“When you look at what COVID has done to interactions for younger people that are now behind a screen, older generations ask ourselves, ‘Are they going to know how to talk to somebody at a restaurant or an establishment that’s not a computer?’” Preve said. “And, ‘Are people going to know how to embrace each other and show kindness and love?’ No matter the age, though, loneliness and isolation is an epidemic.”