College is abuzz with beehive tours and new club 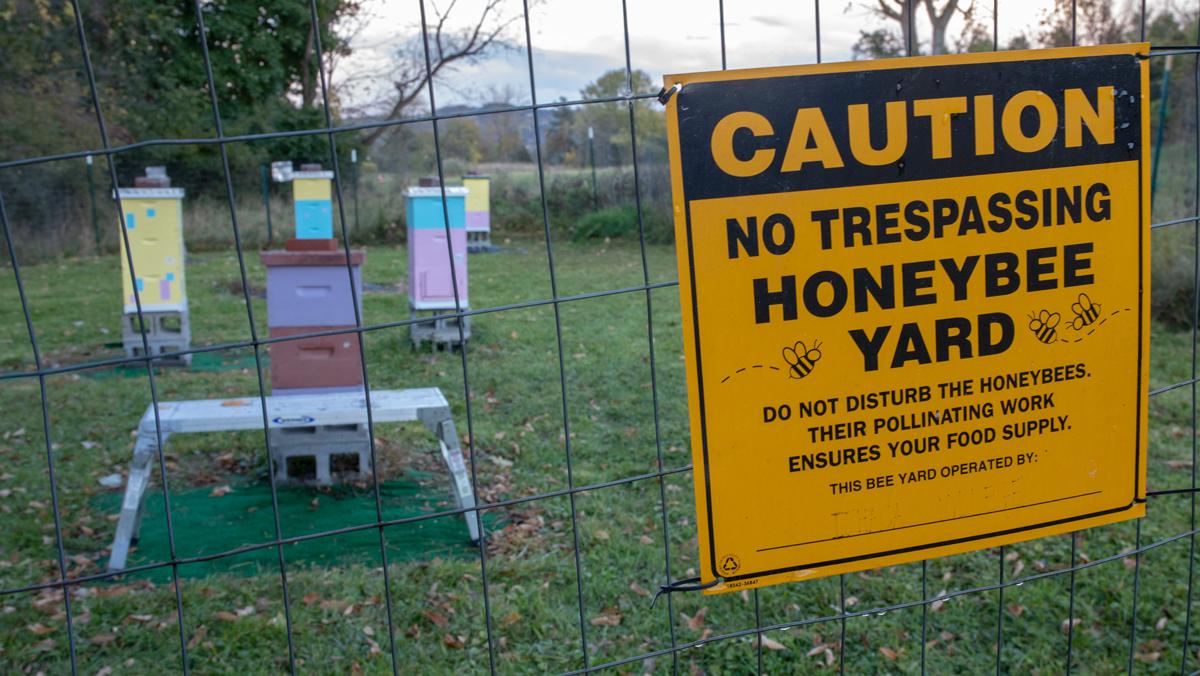 Elias Olsen/The Ithacan
The goal of the open house, and the creation of the Bee Club, is to generate student interest in the apiary. The college’s apiary, where bees are kept, is located near the Office of Public Safety and Emergency Management.
By Rachel Heller — Staff Writer
Published: October 23, 2018

On the evening of Oct. 12, a small grassy field near Ithaca College was swarming with activity. Buzzing conversation, the strumming of a lone guitar and the sweet smell of honey set the scene for the college’s first-ever apiary open house.

The event’s approximately 20 attendees could tour the seven hives in the bee yard and sample the honey made from the apiary. Students also got the chance to sign up for Bee Club: a new organization that aims to generate more student interest in the apiary.

Senior head beekeeper Katie White had the idea for the open house. White wanted to engage the public with the college’s apiary and establish it as an educational resource for the advanced studies requirement of the environmental studies major.

The apiary, located near the Office of Public Safety and Emergency Management, is maintained by the students enrolled in the Non-Timber Forest Products class. The students in the class also manage South Hill Forest Products: the company that sells the excess honey produced by the bees in the apiary.

White said she does not want the apiary to be exclusive to the students in the class.

“I want everybody on campus to know that we have an apiary and to get involved if they want to because so many people are interested in this,” she said.

White said her long-term goal in expanding the outreach of the apiary is to give tours of the bee yard to people on campus and other members of the Ithaca community. She hopes enough people will be involved in the Bee Club to give these tours.

Jason Hamilton, professor in the Department of Environmental Studies and Sciences, manages the apiary and teaches the Non-Timber Forest Products class.

He said the purpose of the apiary is not to produce or make money but to serve as an educational resource.

“The hobbyist level of beekeeping is a way for people to build relationships with the natural world and to understand natural cycles,” he said. “It’s going to help guide our political and economic decisions — that if this is bad for my local community of wild neighbors, then I’m not going to do it.”

As the apiary manager, Hamilton decides how many hives the bee yard is going to have and assists White in figuring out which hives need to be inspected. Hamilton said they inspect the hives for fluctuations in population, changes in nutrition and the presence of diseases.

In 2010, Hamilton was approached by Hannah Whitehead ’12 with the idea to start an apiary on campus.

“Neither one of us had very much experience with bees,” Hamilton said. “So, I enrolled us both in an introductory beekeeper course at Cornell, which was a couple of weekends I think, and that was how we got started.”

After building up beekeeping expertise over the years since the apiary was first established, Hamilton said it is finally time for the apiary to be more open to the public.

“We’re really looking forward to this new beginning for the apiary,” Hamilton said. “Rather than just a couple of research students in environmental studies working with some bees, it’s really going to become a campus resource. It’s going to be a campus apiary.”

White said that even though most people have an aversion to bees, people can learn a lot from them.

“They’re amazing creatures,” she said. “They work together in a really tight-knit way and really work together, and I think we could do that too.”

Bee populations in North America have been declining since the 1940s, according to the U.S. Department of Agriculture. Varroa mites, a parasitic mite that attacks honeybees, were the number one stressor for beekeeping operations with five or more colonies during 2017. Last year, from October to December, 55.3 percent of colonies were reported as being affected by varroa mites.

“Being a beekeeper is harder now than it was 20 years ago,” Hamilton said. “But whenever a new thing comes along, it causes a big impact when it first hits you — like, the varroa mite was devastating because people didn’t know what to do about it, but we’re slowly learning new management techniques on how to deal with varroa mites.”

In 2017, the apiary lost 100 percent of its bees due to changing weather patterns. After 2017’s population loss, the beekeepers used money from the South Hill Forest Products maple syrup sales to buy new bees, Hamilton said.

Hamilton said he is optimistic that the apiary will have good survivorship through the winter this year.

“Our hives are looking really good this year,” he said. “But you never know. We have to try to be ready for anything.”

Freshman Meghan Flexner, a student who attended the open house, said she did not know the college had an apiary until she found out about the open house.

“I saw some posters around the school, and I thought it would be fun to drop by,” she said. “There are definitely a good amount of people here at the event, but I feel like there’s more people who would be interested in this than are actually here.”

Senior Margaret Mojo, another attendee of the open house, said she thinks the current state of the planet increases the importance of learning about bees and beekeeping.

“I feel like it’s a really important thing to be aware of, especially with everything that’s changing in the environment,” she said. “Bees are super important, and they do some pretty cool stuff.”