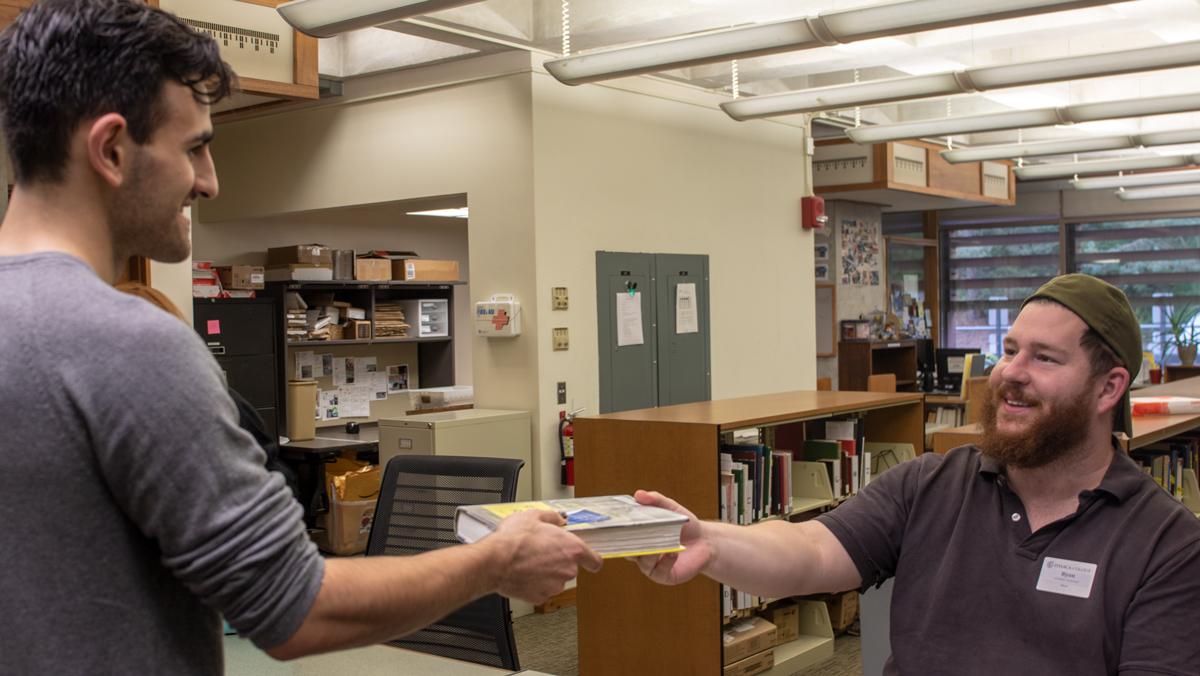 Sairam Reddy Potlapadu/ The Ithacan
From left, Aden Nasarat '18 takes out a book from the library. Senior Ryan Kuahhas works at the Ithaca College library and helped Nasarat and other community members check out books.
By Elizabeth Henning — Contributing Writer
Published: October 3, 2018

The Ithaca College Library has implemented a partnership with the Louis Jefferson Long Library at Wells College that allows students to directly borrow materials from either institution.

The service, which was first made available to students Sept. 14, is a direct borrowing reciprocal agreement through which students from the college and Wells College can borrow materials from both libraries. After a student fills out an application, their request is processed and the student’s ID card then gives them the ability to check out materials at the other college.

“If someone is using a database and types in a book … it gives them a list of libraries, and it might say Cornell or Wells College,” Hogben said. “It would give students another option.”

Wells College is a private college approximately 30 miles away in Aurora, N.Y., with about 500 full-time students. Carol Henderson, library director at Wells College, said via email that Wells chose to partner with Ithaca College for the convenience of their students.

“Ithaca College is nearby — close enough to be an easy trip for our students — and … the IC library’s collection is different from ours here at Wells to make it a valuable resource,” Henderson said.

Henderson said that in addition to students having access to a broader collection, they will not have to wait for an interlibrary loan and can get the materials for themselves immediately.

Senior Katie Evans said that if students are able to drive to Wells, it could be beneficial to them.

“It’s a good thing for people who have the time, … but I’m so busy all the time that the interlibrary loan is good enough,” Evans said

Senior Kyle Dandrea had similar concerns about the distance.

“I feel like it would take longer to drive there,” Dandrea said. “I’d go to the public library instead”

Hogben said the library is looking into partnerships with other networks in order to give students, faculty and staff more options.

“We’re familiar with other academic libraries that do this, that set up these partnerships,” Hogben said. “Cornell has a very large network, and we would add to that network, so we’re definitely thinking about it.”

Senior Erin McGee said she prefers to use interlibrary loans.

“Interlibrary loan isn’t that inconvenient,” McGee said. “It’s pretty quick, so I think it’s better to use. It doesn’t hurt to have that with Wells though.”

“It’s just another option for students and faculty,” Hogben said. “If there’s something there that they want and they don’t want to wait for an interlibrary loan, they can drive there, get a car and get it right away.”

Hogben said the library will re-evaluate the program a year from now.

ITS and library propose limit on paper printing