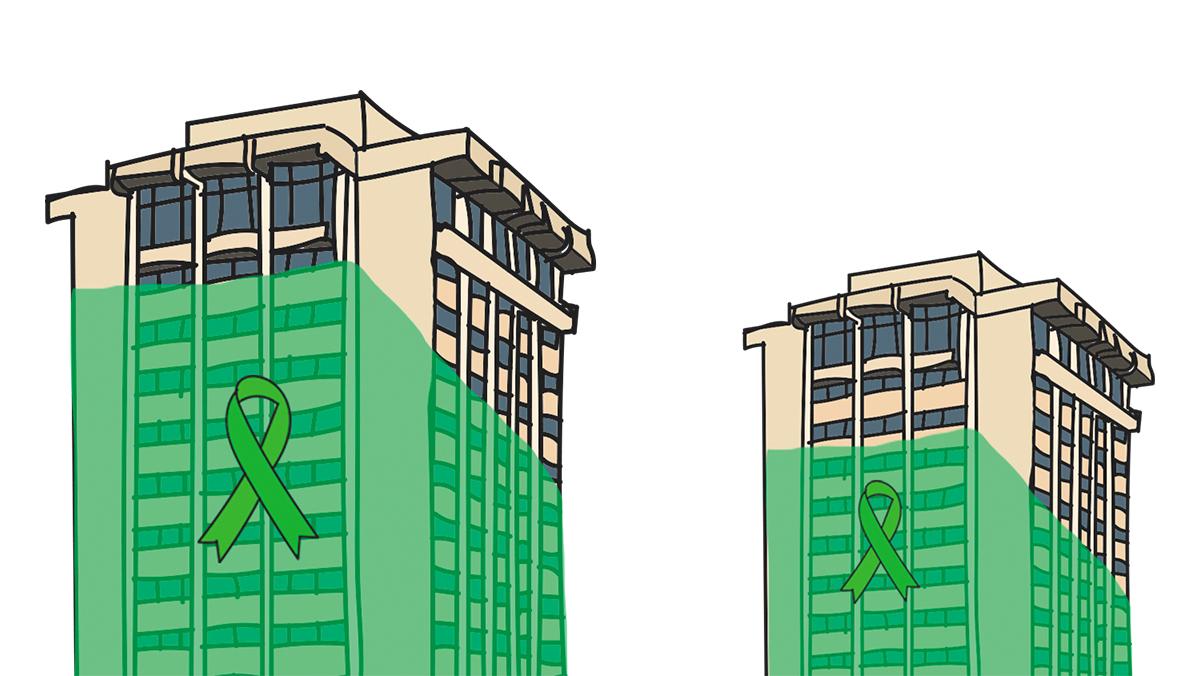 Illustration by Malik Clement/The Ithacan
Since becoming a JED Campus, the college has enacted multiple initiatives, like partnering with the mindfulness app Sanvello and implementing two Stop and Breathe Weeks, a week-long initiative that promotes de-stress during finals weeks on campus.
By Olivia Stanzl — Staff Writer
Published: September 28, 2022

Ithaca College is halfway through the JED campus initiative, the four-year mental health program the college joined in January 2020. The college’s JED committee released a progress report this September which includes an overview of the program and progress made so far.

The JED Foundation is a nonprofit organization that creates programs to promote and encourage the strengthening of emotional and mental health within young adults. When an institution becomes a JED Campus, it is evaluated by a campus adviser. The campus advisers also help the schools that they work with release a Healthy Minds Survey (HMS) — a student-focused survey that collects information on student attitudes around mental health — to the student body.

The Healthy Minds Network has distributed the HMS for 15 years to 350,000 students at over 300 campuses nationally. From 2013 to 2021, the network found that college students’ mental health has been declining. The network’s national study showed that there was a 135% increase in depression and a 110% increase in anxiety throughout those years.

Michelle Goode, program director for the Center for Counseling, Health and Wellness, said that culturally, the U.S. has begun stigmatizing mental health less by creating programs encouraging people to talk about their mental health struggles, like the Make It OK campaign.

“Sometimes I wonder if maybe the numbers have not changed as much as we think,” Goode said. “There was so much stigma before. … There’s now new awareness and in some cases that allows for people to really come forward and share that with others in a way that is different than it was before.”

Ryan Bunts, senior JED campus adviser, works with the college and has worked with the JED Foundation since 2020. He said the reason for rising national numbers is something he has actively been discussing at work.

“I feel like we’ve been successful in kind of creating that narrative of it’s OK not to be OK,” Bunts said. “Which is great. But, so, I think numbers have gone up because of that. … But now, what are we going to do about it?’

Junior Kiara Valera said she believes that, because of social media, people are more comfortable discussing mental health. She said that while this is a good step to rid society of the stigma around mental health, some people are making mental health issues like depression seem more like a trend than an illness.

Sophomore Alex Neuhedel said neither he nor his friends have used mental health resources provided by the college, like the Center for Counseling and Psychological Services (CAPS). He said he feels a reason for this is that often students learn early on that they have to solve their issues on their own. The National Alliance of Mental Illness found that while one in six youth have a mental condition, only half receive treatment.

“A lot of people who are coming into college have been in the same position where [they had] drama or someone being bullied, and their school never took any actions toward that or helped them cope with it,” Neuhedel said. “So, I think that some people might be … a little hesitant to reach out to CAPS.”

Brian Petersen, director for CAPS, is starting his fourth academic year at the college after working at Pace University, another JED campus.

“I was familiar with what they brought to a college campus and what they were focusing on,” Petersen said. “So I was already thinking that would be a good thing to bring to the college. But, unbeknownst to me, [former Ithaca College] President Shirley Collado was thinking the same thing.”

Along with Petersen, Goode is also co-chair for the JED campus committee. The committee consists of around 40 campus community members from all different departments.

“Mental health isn’t the responsibility of one office or one profession,” Goode said. “Really, to take care of mental well being, like, we all need to work together. And we all have different roles that we can play. So I think that’s the exciting part too.”

Bunts said he meets with the college’s co-leads every few months to help them with implementing programs for student mental health and suicide prevention.

“I’ve worked with probably about 40 different campuses over my tenure at JED and, you know, your leads and your leadership team, they’re very engaged in this,” Bunts said. “There is a desire to be better.”

Since becoming a JED Campus, the college has enacted multiple initiatives, like partnering with the mindfulness app Sanvello and implementing two Stop and Breathe Weeks, a week-long initiative that promotes de-stress during finals weeks on campus.

The college has also created a postvention team which consists of representatives from the Dean of Students, Provost’s Office, Counseling and Psychological Services, Residential Life, and Student Conduct and Case Management. Postvention refers to activities that promote healing after someone takes their own life. The creation of the college’s postvention team was formed because of a recommendation from JED. The team formalized a procedure for how the college will respond to a death in the campus community and developed a resource guide to distribute to the community if a death were to occur.

The college now offers a tuition insurance program, GradGuard, that allows for a reimbursement to be made when a student takes medical leave for any medical health reason. Covered expenses can include room and board, tuition and other fees.

The college became part of the Cayuga Health System in the 2022–23 academic year as a way to create a more sustainable student health center. The more comprehensive healthcare system includes behavioral health specialists who will help students deal with things like stress and anxiety.

“We’re excited to see these different pieces kind of coming together,” Goode said. “And sometimes it’s things that aren’t so visible, but we’re really excited that [things] are happening in the background that can make a big difference, too.”

Valera said that while the college advertises itself as a diverse campus, it is a predominately white institution. She said the understaffing of not only CAPS counselors, but POC CAPS counselors, leaves POC students feeling even more underrepresented.

“I just feel like, because this is a community [where] they’re trying to cater to everybody, there should at least be more employees who are able to work a wide range of students who come from different backgrounds and different cultural dynamics and all those things.”

In a Sept. 6 article by The Ithacan, Peterson said CAPS has hired three new counselors in the past year and are planning to hire another in Fall 2022.

“We’ve been able to hire more diverse counselors, so we’re increasing the diversity of our counseling staff, which is great,” Petersen said. “So we’ll continue to try to meet the needs of students.”

Emmy LoBrutto, a case manager in the Office of Case Management at the college, said she has noticed different trends in mental health issues that have changed since the pandemic.

“I think that maybe we’re seeing more of a social anxiety due to students not being able to connect in person with one another for the past couple years as often as maybe we would hope they would,” LoBrutto said. “So I think there’s different challenges.”

In order to help the faculty handle the rising amount of anxiety, the committee is currently planning gatekeeper training. The gatekeeper training program helps up to 40 faculty and staff receive information and resources to notice and respond to students in distress.