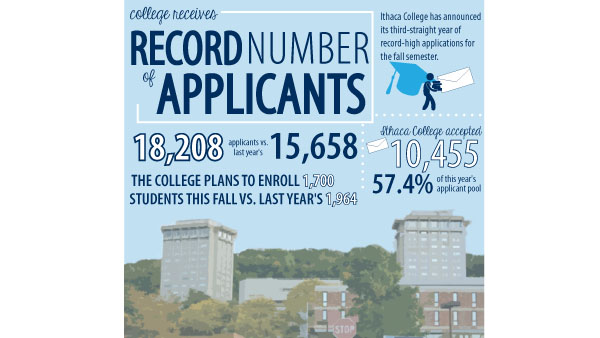 With Ithaca Today and An Inside Look happening this weekend, Ithaca College is anticipating large numbers of prospective students visiting campus, as it has announced its third-straight year of record-high applications for the fall semester.

Of this year’s applicants, the college admitted 10,455 students, or 57.4 percent of the applicant pool. According to data from the Office of Admission, this is a narrower acceptance rate than those of previous years, which have averaged to 66 percent of applicants being admitted.

Eric Maguire, vice president of enrollment and communication, said because the college may still choose to admit more students from the waitlist, 57.4 percent is not a final percentage. He also said  the final acceptance rate will nonetheless be below 60 percent by the time waitlisted students are reached.

Maguire said the increase in applicants had an impact on the academic quality of the pool of accepted students.

“We had a strong pool in terms of academic quality, and given the increase in selectivity for the institution, that has increased the profile of our accepted student population as well,” he said. “It’s definitely a competitive year in terms of the admission for Ithaca College this year.”

Junior Derryk Williams, who has been a president’s host since his freshman year, said he has noticed more traffic on campus tours within the past year, compared to two years ago when some weeks were scarce in visits.

“Even if it’s not a busy week, we’re still having about 25 families come to check out the college,” he said.

He said Ithaca Today is a prime opportunity for accepted students to get an intimate impression of the college.

“Students are realizing that even though it is a private school, it’s a really cool environment that has both academics and athletics,” Williams said.

Ithaca Today, which will feature student panels, luncheons with faculty and organization fairs April 12 and 13 for accepted students, is the college’s opportunity to seal the deal with many of its prospective students, Maguire said.

Freshman Cristina Porto said as a prospective student attending Ithaca Today last year, she went to a panel discussion where she had the opportunity to speak to college students without the oversight of parents or administration. She said this experience helped her make the decision to enroll at the college. One year later, Porto is volunteering on one of the same student group discussion panels to give others a similar experience, she said.

“It allows you to get a real perspective of the college without a real filter,” she said.

Maguire said the applications from underrepresented students — including numbers of both international and African, Latino, Asian and Native American students — have increased this year at a higher rate than the general increase in applications. Admissions only releases this information in the profile of the enrolled class, not of the applicant pool.

The college offers another program called An Inside Look, which allows prospective ALANA students to talk to current ALANA students about their campus experiences and specific ALANA resources during programming beginning the late afternoon of April 12.

Despite the peak number of applicants, the college aims to enroll its usual target of 1,700 students or fall within a reasonable range of that number, he said.

“While those application trends are positive, that does not necessarily equate to enrolled students,” Maguire said. “We’re really mindful in the month of April as students are receiving their acceptance letters and financial aid packages.”

Gerard Turbide, director of admissions, said there is always the risk of over- or under-enrolling each year, but the college has accommodated in the past any results that were out of its comfort range.

“When we have enrolled more students than expected, the campus community has done everything possible to make sure that every student has the high-quality academic experience we are known for,” he said.

Bonnie Prunty, director of residential life, said when the college over-enrolled the freshman Class of 2013 in 2009, one of the means of managing the housing shortage was converting Terrace 13 to freshman living. However, she said, the first-year program at that time only reserved about 300 spots for incoming freshmen, whereas the FYRE expansion effective Fall 2014 will reserve more than 1,650 first-year spots.

“We’re going to be in a better position than we’ve ever been in terms of having dedicated space to be able to accommodate our first-year class,” she said.

If needed, Prunty said, the college will be able to convert Boothroyd doubles to triples and lounge spaces in other dorms to living spaces.

Maguire said the waitlist functions like the college’s insurance policy in case not enough students who are planned for in the budget end up enrolling. He said pulling from the list can be positive with increased selectivity.

“Particularly in a year as selective as this past year, there’s always some great students that you just couldn’t accept because of the growing selectivity of the institution,” he said, “I always appreciate the opportunity to go to the waitlist for a few students and bring them in.”

Both Maguire and Turbide mentioned the strategic vision and the Integrative Core Curriculum as possible factors in the surge of applicants. Maguire said the information sessions offered to prospective students have gotten more specific and complete with information about these newly solidified programs.

“Now it’s a much more cohesive academic message, and that message is different than what they’re hearing at a bunch of other institutions,” Maguire said.

The differentiation point, he said, is the integrative theme-based academic curriculum, rather than a general core curriculum like other colleges have.

Jes Voutsinas, a high school senior from Newtown, Pa., who enrolled at the college for Fall 2014, said the talk that the dean of the music school gave when she visited Feb. 22 catered to her interests in the significance of music. She said she believes music is more than just a form of entertainment; it is an innate human expression.

“It was such an inspiration and so in line with my own philosophy that the school just felt right,” she said.

“It embodies what I wanted: a pleasant environment, an accepting student body, a focus on health both mentally and physically and networking opportunities to further my chosen career,” she said.

Maguire said programs such as An Inside Look and Ithaca Today are key to securing these students’ enrollment and keeping the momentum going.

“I’d like to see our selectivity continue to increase,” he said. “I think that positions us better as an institution and allows us to do more things in terms of shaping our class.”