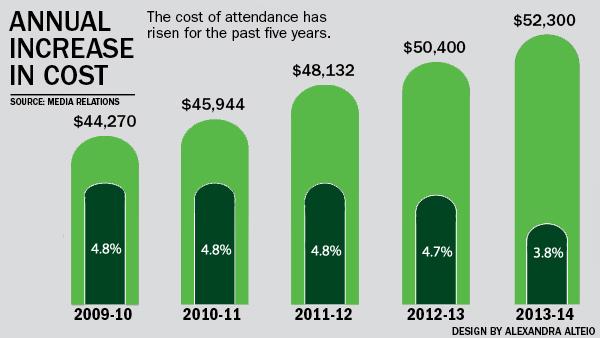 Following the 2013-14 budget approval by the Ithaca College Board of Trustees, the college has announced that tuition next academic year will be $38,400, which is an increase from last year of $1,400.

The board of trustees approved the $223.6 million operating budget Feb. 13. Room and board will cost $13,900 next year, bringing the total cost of attendance to $52,300, an increase of 3.8 percent from last year. The percentage increase in tuition is the lowest percent increase in more than 40 years.

Carl Sgrecci, vice president of finance and administration, said the college has been working to keep private higher education affordable.

“We’ve been making a very concerted effort during this last year to try to control the rate of increase in college costs, recognizing that affordability is becoming an increasing issue for prospective students and their families, and our current students for that matter,” Sgrecci said.

“It’s a very central commitment to reduce the rate of increase in tuition, room and board over time to reduce it significantly,” Rochon said.

Many comparable private institutions have not yet released tuition data for 2013-14.

Despite the percentage increase being the lowest in 43 years, the increased tuition to $38,400 is still a burden for many students.

Freshman Wahid Khan, who is from Bangladesh, said any increase in costs will create problems for him and his family. In Bangladesh, he must file all college expenditures with a central bank. He said the fact that the percent increase is small will make no difference.

“I’m not an exception to this, so whether or not this increase is small or incremental, it doesn’t matter as long as it’s inconvenient for me, which it will be,” Khan said.

Junior Eve Rosekrans said she is not happy tuition has increased more and more since she came to the college.

“The fact of the matter is I’m paying significantly more than I planned on when I entered the school three years ago,” Rosekrans said.

Students from the Class of 2013, which is the largest in Ithaca College history, will be graduating in May. Rochon said the college will have 4.5 percent fewer students next year than there are this year. The overall enrollment is expected to decrease by at least 241 students next year, which will cause a net tuition loss of more than $5,000,000.

In a letter sent out to parents, Rochon said, “Our commitment to affordability is also signaled by our inclusion in our budget of nearly $87 million for institutional financial aid, the highest amount ever.”

For 2013-14, Sgrecci said $86.7 million is designated for financial aid. This is actually a decrease from the 2012-13 financial aid allotment, which, according to a college press release, is $88 million. In 2011-12, $84 million was allotted for institutional financial aid.

However, Rochon said the graduation of the Class of 2013 and shift in student population is the reason for the financial aid decrease.

“On a per student basis, [the financial aid is] the highest it’s ever been,” Rochon said. “It’s unusual to have your student population change from one year to the next.”

Also incorporated into the approved budget is $1 million that the college needs to make in savings by June 1.

Besides tuition and financial aid, the board of trustees has approved a salary pool of 2.5 percent. The pool will have a general merit provision of 2 percent, and .5 percent will be given on the basis of performance. Salaries make up about 59 percent of the college’s expenses.

“I’m very pleased that even in these very stringent conditions, we’re having a significant reduction in the number of students and cutting back on a number of expenditures,” Rochon said. “The salary pool is comfortably ahead the rate of inflation as it has been every year for the last four years.”

The college has saved a large amount because of reductions in utility costs of $800,000, primarily because of a decrease in natural gas prices. There was also an increase in income of $850,000 from college investments which is the result of reinvesting surplus from the prior year into the endowment. The budget also designates $4.5 million for IC 20/20 initiatives.

Freshman Nora Noone, the fourth child in her family to go to college, said she dislikes that tuition is going up more next year. She said the fact that the percent increase is lower does make a difference, but tuition is still costly.

“It does make a difference, but an increase is an increase,” Noone said. “I’m obviously happy that it’s not as much of an increase as it could be, but I think any more that I have to pay is a little excessive.”