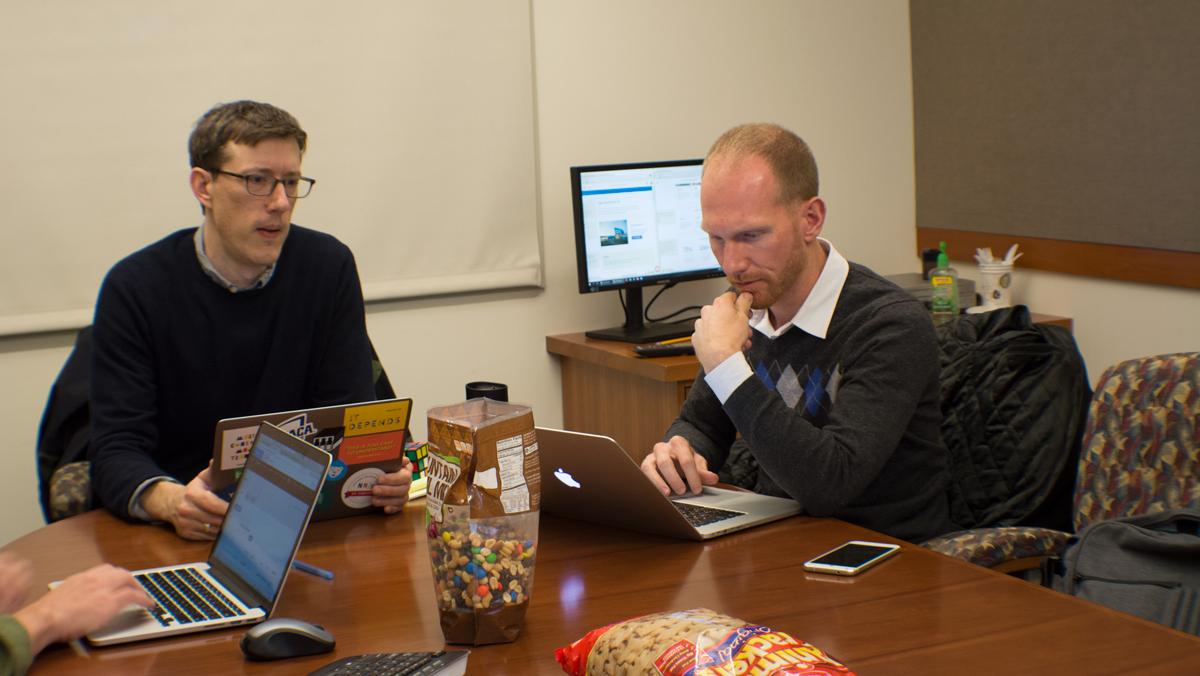 The Ithaca College website is being rebuilt after more than 10 years to make searches easier and to better support uploaded content.

Molly Israel ’05, executive director of marketing strategy, and David Cameron ’96, senior web strategist, are the project developers for the site and began planning the project two years ago. The new site will be easier for users to access on all devices, including mobile, Israel said. She said the team hopes to be able to test the site internally in the coming weeks, with other launches to follow.

Version one, which will be launched this winter, will have a new content management system and hosting platform, new visuals and design, and a new layout. Unlike the current site, the new site will be mobile-friendly.

Cameron said via email that the site will include a more modern design and will be more responsive to searches, making it easier to use from any device or screen size. The site will also give more flexibility so content managers can upload photos, videos and other content on the site.

“It will showcase a new global navigation to make it easier for users to find what they are looking for,” Cameron said.

Israel said the team first conducted personal interviews with faculty, staff, students, alumni and prospective students to see what their thoughts were about the current site. Israel said over 5,000 people responded to the surveys or participated in the interviews the team conducted and that most agreed that the website needed to be redesigned. She said the most common complaint among those who responded was that it was difficult to find content through the search engine on the site. The new site will make this process easier, Israel said.

Israel said via email that the team wanted to build something that was beautiful and could change over time. The new site will include a cleaner and more modern design.

“We wanted it to be built right so that we could continue to evolve it over time without starting from scratch,” Israel said. “Additionally, we wanted to base our design, navigation, content and all other possible decisions on the research.”

The college has partnered with two outside agencies to create the new site. Beyond, one of the partners, assisted with research, planning and implementation of the project. Four Kitchens, the other partner, assisted with the web development and building code.

Brandy Jackson, technical project manager for Four Kitchens and facilitator and liaison of the development team, said one of the major changes is that the website will be moving from Web Profile Manager to a different content management system, Drupal 8. Since Drupal is an open source, it simplifies the content that will be uploaded, better supporting the school’s website.

Cameron said that once the site is launched, training sessions will be held to help faculty content owners with managing their respective departmental sites.

“We want to empower content owners with knowledge and training on many topics,” Cameron said.

Michael “Bodhi” Rogers, professor in the Department of Physics and Astronomy, has been managing the content that is uploaded to his department’s page since his first year at the college in 2003.

Rogers said he is excited about the new launch since his research field has very rich, dense visuals. He said the new site will display these better, which will let him publicize his research more.

Sophomore Shanel Gray said she only uses the website when she looks up degree requirements or program information. She said she thinks the website lacks visuals about its programs.

“For a school that’s well known for its communication and film programs, I thought it would show a lot of pictures of student activities and achievements, but it doesn’t,” she said.

Cameron said the site will continue to evolve over time, even after these new additions are put in place. He said the college is committed to improving the site on an ongoing basis, as the development team is in charge of identifying new improvements.

“A site of this magnitude requires constant attention to remain user-friendly and relevant,” he said.

Cameron said the majority of the new site should be implemented by summer 2018.