Commons construction is on schedule 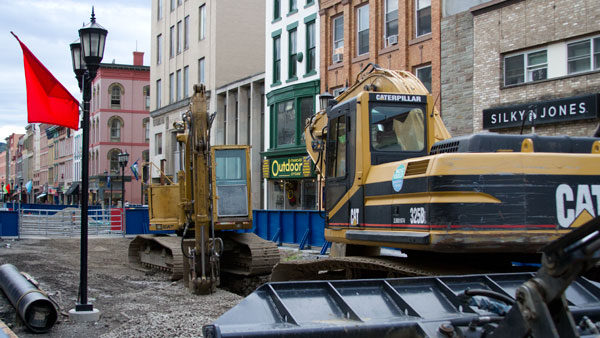 Max Gillian/The Ithacan
The Commons construction is on schedule to be completed by Thanksgiving 2014.
By Kelly Cucolo — Staff Writer
Published: September 18, 2013

The construction of The Commons is currently on track and on budget to meeting its Thanksgiving 2014 completion deadline.

Project Manager Michael Kuo said he and his team have made consistent progress on the project, but are aware that there may be delays as they install new water mains, power lines and sidewalks.

“We planned the project in a deliberate way, but we also have to be ready to react to situations as they surprise us,” Kuo said.

Kuo said the utility lines on State Street, which is a 150-year-old street, were due for an upgrade. New phone, power and water lines will replace the current lines, which were last repaired in 1975. He said the unpredictability of the brick, however, could delay the deadline.

“It’s always a surprise every time you dig,” Kuo said.

Kuo also said the sidewalks would be repaired with new concrete, and trees and lamps would be repositioned to make the streets less crowded.

“By livening the street, we’ll make the businesses more valuable,” Kuo said. “It will be much more open. … You will be able to see clear through The Commons.”

The team is evaluating its construction plans for next year, and Kuo said the next phase will soon become reality.

Construction has forced a relocation of annual events like Apple Fest, which will be held between West State Street and Cayuga Street this year, Kuo said.

“Since construction is a two-year project with a break during the winter due to the cold weather, the events will go on as planned and on schedule,” he said.

The construction may temporarily slow down business, but Kuo said the purpose of the reconstruction is to improve future mobility for pedestrians and increase traffic on The Commons.

“They are very aware that it is a very important element to the economy downtown,” Kuo said.

Kuo said most businesses on The Commons have been understanding of the inconveniences caused by the construction.

Joanne Lamoureux, the owner of the Pack ‘N Ship Store on The Commons, said the construction has not negatively impacted her business, but her neighbors have lost customer traffic.

“My business has been spared to some degree,” Lamoureux said. “People come here specifically for us, because they know we are here and provide a service they need. Stores that are more general retail that rely on foot traffic I think are being impacted. There are just fewer people walking around on The Commons.”

Joe Wetmore, the owner of Autumn Leaves Used Books, said the reconstruction is a good investment for The Commons and, as with any maintenance project, decreased foot traffic should be expected.

“In the short term, most businesses have seen a reduction in foot traffic, but I’m also predicting that after The Commons is rebuilt, we’ll see an increase in foot traffic from everybody who’s really excited … to see the brand new pedestrian mall.”

Wetmore said there have been small maintenance projects on The Commons since it was built in 1974, but the current project is most extensive reconstruction. He said construction updates are a natural part of the business cycle.

He also said the Downtown Ithaca Alliance and the City of Ithaca have kept merchants informed about and involved with the construction project since the planning stage.

“The communication during this project has been outstanding,” Wetmore said. “There’s been a lot of discussion both at the planning stage and as the implementation starts moving forward. We’ve been kept very much abreast of what’s been going on.”

Tammy Baker, outreach coordinator for the construction project, said she thinks the reconstruction of the utilities and surfaces on The Commons and the increased open space will make it a more friendly place to dine and shop.

Baker, who visited and spoke with merchants on a regular basis throughout the project, said she is excited for the completion of the construction.

“I am going to be really delighted to be involved in the process from the beginning to the end, seeing people be really excited and holding their hands through the process,” Baker said.