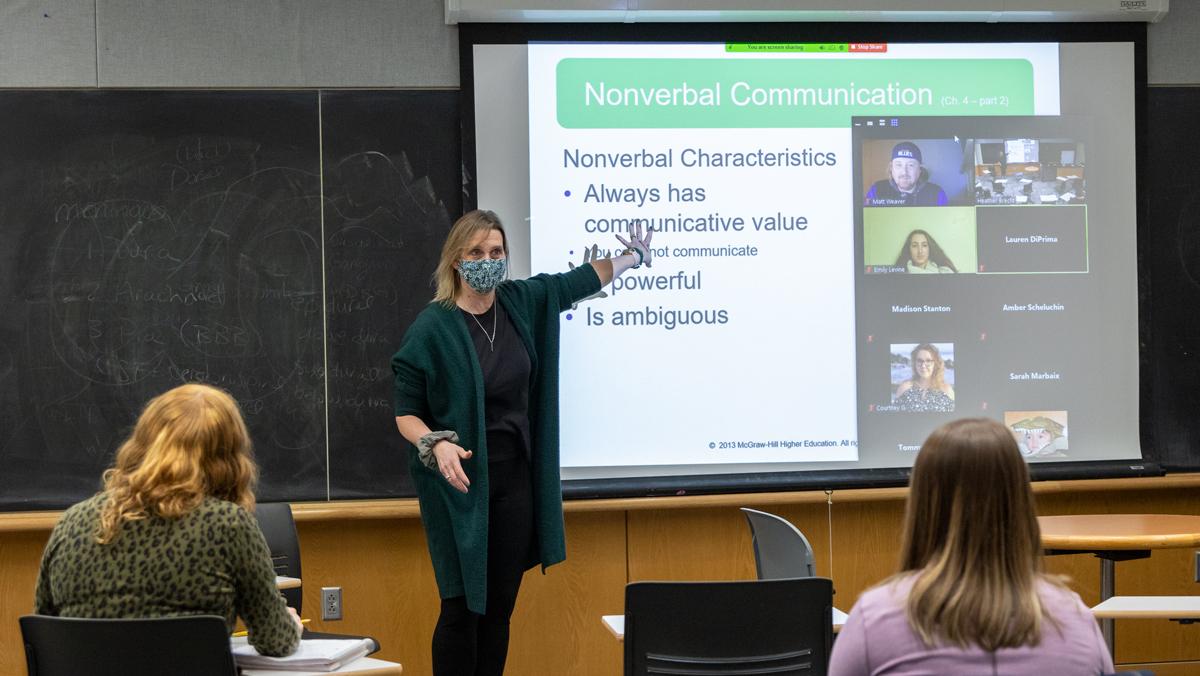 Ash Bailot/The Ithacan
Heather Brecht, lecturer in the Department of Communications Studies, teaches a class March 2. Brecht's position, along with her department has been targeted for elimination.
By Alyssa Beebe — Contributing Writer
Published: March 4, 2021

Students, alumni and faculty within the Department of Communication Studies at Ithaca College are disappointed with the elimination of the communications studies major, which is being cut as a part of the Academic Program Prioritization (APP) process.

Scott Thomson, assistant professor in the Department of Communication Studies and adviser for the speech and debate team, said the major has three areas of focus: the performance of speech, the study of rhetoric and the social and scientific area of study.

The communication studies program is one of the oldest at the college, having found its roots in the elocution and rhetoric courses inaugurated by George C. Williams, former Ithaca College president, in 1897. The Speech and Debate team, also known as the Forensics team or program, was founded in 1932.

The major was especially attractive to exploratory students like senior Ryanne Rochester and Sean Themea ’16. Both Rochester and Themea began their freshman years in the exploratory program and graduated as communication studies majors.

Rochester said that after taking courses surrounding race and gender that piqued her interest, she was able to work collaboratively with small groups of people while researching and analyzing ideas.

Themea said he struggled to find his footing at the college. Before he found the communication studies major, he said he considered transferring to another college, but then he found the program.

“If it wasn’t for Scott [Thomson] and the communication studies program, I might not be a Bomber,” Themea said.

He said the communication studies major prepared him to jump into the nonprofit world after college. He is working now as Interim President of Young Americans for Liberty. Themea said that without clarity, detailed communication and confidence that faculty members will be taken care of, the school may lose him both as a donor and an advocate for the college.

Part of the heartache of the major being eliminated is the strong connection between faculty and students within the program. Thomson said faculty members try to be involved with their students, including conducting research with them, hosting events and bringing them to conferences. He mentioned taking students to the Eastern Communication Association Conference in 2019 with the Department of Communication Studies. Communication studies majors Alexa Flinker ’19 and Kathryn Kandra ’19 presented versions of their senior theses. The Eastern Communication Association has been an academic, service-oriented organization for research, theory and teaching within the realm of communications for over 100 years.

“By the time students graduate, they really feel like they are a part of us,” Thomson said.

“She is the kind of professor that you would be sad if she canceled class,” Ilioaei said. “I even asked my faculty adviser, ‘Is she teaching any other classes? Because I want to take them.’”

Junior Bella Cruz said that although she is in the culture and communication major, the discontinuation of the communication studies major will impact her education. She said she worries she will have fewer course options with faculty being cut.

“Lots of great professors I’ve had are leaving too, and that’s very sad because I had such a great connection with many of them,” Cruz said. “The professors that remain are going to be overworked trying to pick up the slack and the student-professor connections are going to be strained as a result.”

Future of clubs unknown amid faculty and program cuts