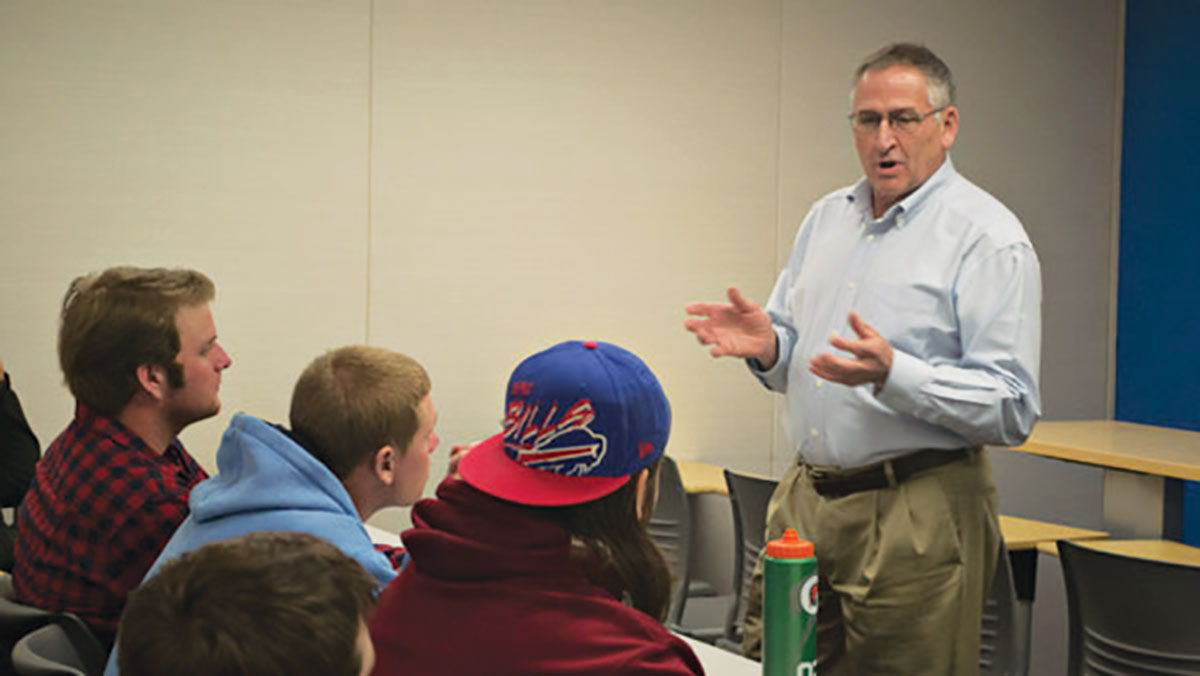 The Ithaca College sport studies minor is currently on hiatus and will not be accepting new students. Students currently in the minor will have an opportunity to take the required courses in Spring 2021.

Stephen Mosher, professor in the Ithaca College Department of Communication Studies, said in an email sent to students in the sport studies program Oct. 11 that Spring 2021 will be his last semester as a full–time professor. He said that he has decided to retire after 33 years at the college. Because Mosher is the coordinator for the sport studies minor, he said that the program will be put on hold until the administration determines how to move forward with the program.

Mosher said that because he took the incentive to retire, the classes he is responsible for — History of Sport, Social Aspects of Sport and Sport: Philosophical Perspectives, the three required courses for the minor — could potentially not be offered after May 2021. All three will be offered during Spring 2021 for students who still need to complete them. He said that there are other faculty members on campus who have experience teaching two of the required courses, but he is the only faculty member fully dedicated to the program. There will still be elective classes for the minor in other departments available during the 2021–22 and 2022–23 school years, Mosher said in the email to sport studies students.

In April, Hayley Harris, vice president for human resources and planning, and La Jerne Cornish, provost and senior vice president for academic affairs, wrote in an Intercom post that eligible faculty and staff will be able to take advantage of a one-time incentive to retire. This applied to employees who are at least 60 years old and have a minimum of 10 years of service as of June 30, 2020. The incentive was a one-time payment equivalent to six months of their salary, in addition to accrued and unused vacation. Faculty members who took this incentive were able to add a terminal one-semester sabbatical. The decision had to be made by July 1, 2020.

“While the current [COVID-19] situation is certainly heightening and accelerating the need to examine our staffing levels, it is not in and of itself the primary driver,” the announcement stated. “Rather, the need to recalibrate the college’s size was clearly outlined in our strategic plan. We now need to begin taking the difficult steps necessary to achieve that goal.”

At the Faculty Council meeting on Oct. 6, Cornish said that the college would be analyzing which programs attract the fewest students and possibly remove entire departments because of low enrollment. However, Cornish said via email that program prioritization is just now beginning and no program has been recommended for hiatus by the Academic Program Prioritization Implementation Committee yet.

The sport studies minor is currently in the School of Humanities and Sciences with 38 students enrolled in the program, according to the Office of Analytics and Institutional Research. Mosher said that H&S will have no new hires this year nor the next.

“Until the college can figure out how to deliver courses in the minor, it is best to put a hold on accepting new students into the program,” Mosher said via email. “Given the college will be making difficult decisions during this time, there will be more disappointments.”

“We’ve had preliminary discussions about housing the sport studies minor under the Park School,” Powers said via email. “We believe that the addition of the minor could augment our already robust curriculum for sports media, and we plan on offering the minor in Park as soon as next fall.”

Sophomore Dane Richardson said that he was not surprised when he received the email from Mosher after hearing about staff members being cut at the Faculty Council meeting.

“I figured that the sport studies minor and some other departments could be in jeopardy,” Richardson said. “So is it a huge surprise to me? No, but now, I guess, as a student, you just have to adapt to the circumstances.”

Richardson said he will have completed six of the 18 credits needed to obtain the minor by the end of the current semester but would have to take two of the three required classes in the spring. He said he may drop the minor because of this announcement.

“I’m a little bit on the fence as of right now,” Richardson said. “I would say yes right now, but I’m not 100% committed to finishing the minor because of what just happened.”

Mosher said that most students enrolled in the program should be able to complete the minor, but it will not be known until after the upcoming spring semester class registration.

While senior Emma Fruhling said she is relieved that the decision to pause the minor will not affect what she is graduating with, she is disappointed that there is the potential for the program to be dismissed, especially for future students who are not fully aware of what they want to do after graduation.

“I think it’s upsetting considering that Professor Mosher did work really hard to get this minor to where it is today,” Fruhling said. “It is a very educational minor when it comes to people who don’t necessarily know what area of sports they want to go into but just want to study sports a little bit more. So it’s upsetting to me that there’s a possibility that incoming [Ithaca College] students won’t have the opportunity to get that education and go through those courses as I did.”

Mosher said that because sport studies is an interdisciplinary field, compared to sports media and sport management being more pre-professional programs, it is vulnerable to being replaced by other programs.

“​My greatest concern about the future of the minor is that, in general all across higher education, programs in the humanities and social sciences are being threatened, if not eliminated,” Mosher said via email. “Since sport is essentially a cultural phenomenon, it seems decidedly imprudent for the college to eliminate such a program.”

Originally, sport studies, sports media and sport management were located in the School of Health Sciences and Human Performance. In 2014, it was announced that the sport studies major was to be discontinued because of low enrollment in the program, with the last major classes being offered in 2018. Following this decision, the sport studies minor remained and was housed in H&S. Then, in 2016, sports media was moved to the Park School and sport management was moved to the School of Business. Mosher said that he felt that the sports management, media and studies programs were at their best when they were in their own department in the 1990s.

“During this time, our three majors became, in my view, the finest and most forward–thinking undergraduate programs in the country,” Mosher said via email. “I have been quite clear that I believe the decision to eliminate the sport studies major and move sport management to Business School and sports media to the Park School of Communications would result in all the programs becoming ‘less than’ what we offered in the past.”

Mosher told students that he would work closely with them himself to ensure the best chance for them to finish the minor. Richardson said he appreciated Mosher’s transparency after feeling that the college did not act in the same way when announcing its plan to continue remote learning into the fall semester.

“Dr. Mosher sent us an email [Oct. 11] getting us the information before so that we had time to figure things out and whether we want to continue it or pick up a different minor,” Richardson said. “It’s transparency. I appreciate that, especially because everything that went on right before we were supposed to return to campus. There wasn’t much of that.”