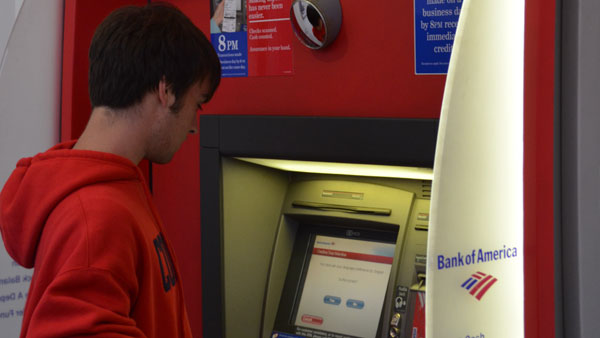 Max Gillilan/The Ithacan
Sophomore Mathew Michaud withdraws money at the Bank of America ATM on The Commons. The branch will be taken over in November.
By Jack Curran — Online News Editor
Published: September 25, 2013

Chemung Canal Trust Company has announced that it will take over six Bank of America branches in New York, including the local branch located on The Commons. After the transfer, all existing Bank of America deposit accounts opened at the sold offices will become Chemung Canal accounts.

After an auction in July, Chemung Financial Corporation acquired two Bank of America offices in Ithaca, located at 202 The Commons and 304 Elmira Road. Chemung Financial also purchased two branches in Auburn, one in Cortland and one in Seneca Falls.

The offices will transfer from Bank of America to Chemung Canal on Nov. 22. Michael Wayne, the senior vice president and director of marketing at Chemung Canal, said checking accounts are expected to transfer over in about five weeks.

Bank of America has already notified its customers with affected accounts about the sale. Wayne said Chemung Canal has sent a welcome letter to its new customers and will send them more information after the transfer happens.

Several Ithaca College students have expressed concern about the Bank of America leaving The Commons. Sophomore Martha Fisher said she opened a Bank of America account over the summer to avoid ATM fees while at school.

“This summer, I decided to get a Bank of America card, because I had Chase, and there’s no Chase in Ithaca, so every time I’d go to the bank I’d get charged five dollars for taking money out,” Fisher said. “Now I find out they’re closing, and that’s annoying, because Chemung does not exist where I’m from.”

“There will be a calendar that will say, on noon of ‘X’ day, stop using your Bank of America debit card and start using your Chemung Canal debit card,” Wayne said. “All of that very specific information will be outlined and mailed to every customer approximately 30 days before the transfer takes place.”

Wayne said credit cards and loans with large lines of credit, such as mortgages and car loans, are not going to be transferred from Bank of America.

T.J. Crawford, Bank of America senior vice president and regional media relations executive, said in an email interview that the bank sold the branches because online banking has reduced the need for offices.

“As customers continue to do more of their routine banking transactions outside the branch, we’ll adapt accordingly,” Crawford said. “This may mean closing branches, or selling them when the right opportunity presents itself.”

Wayne said Chemung Canal purchased the branches to expand into a larger market. Wayne said he expects Chemung Canal to do well in its new locations because of its connection to the community.

“We believe our type of community banking will be widely accepted by the residents and businesses of these communities,” Wayne said. “Bank of America is a great organization, but it operates on a national and international scale, while we tend to be a lot more individual-client focused.”

Chemung Canal currently has offices at 806 West Buffalo Street and 909 Hanshaw Road in Ithaca. Chemung Canal also has an ATM near the Bookstore in the Phillips Hall Annex in the college.

“You’re starting with that bank, because that’s the bank you trust and that’s the bank that you want to be with,” Peterkin said. “It’s ridiculous and unfair, because I’m probably going to have to go back home and start another account with another bank, because now I’m with Chemung when I didn’t really sign with them.”