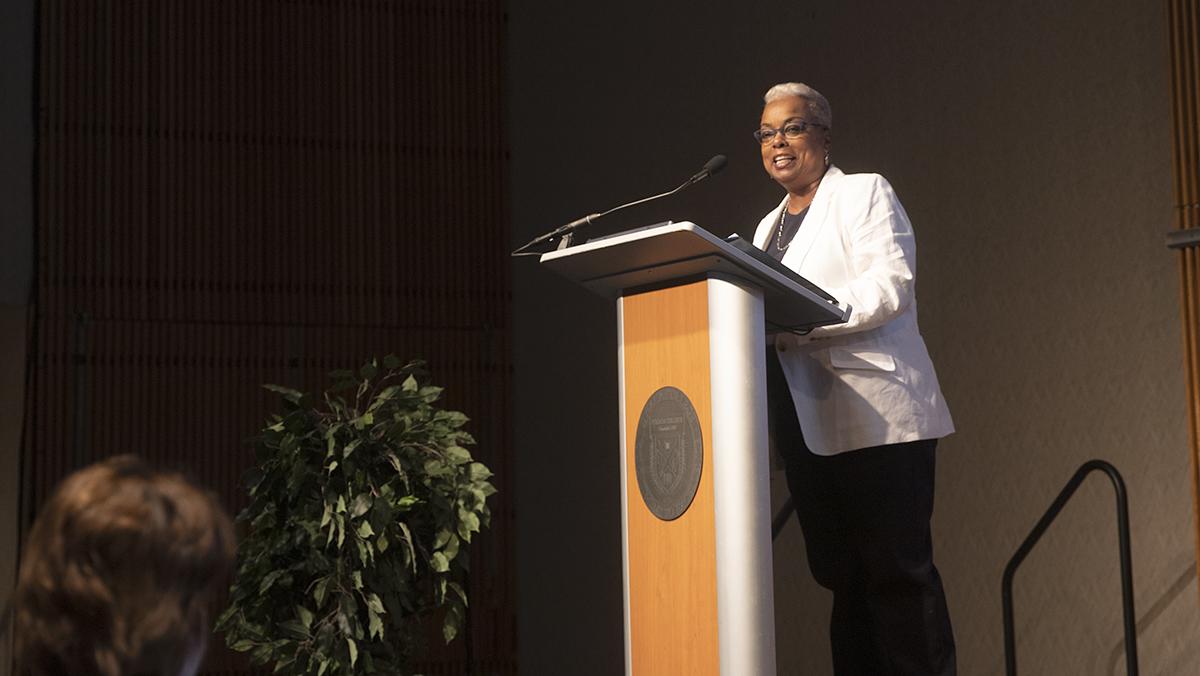 The Presidential Inauguration ceremony of Ithaca College’s 10th President, La Jerne Cornish, will be held Oct. 1 along with multiple events and showcases to join in the celebration with the theme of “Ithaca Together.”

The inauguration ceremony, which will be held at 10 a.m. in the Athletics and Events Center (A&E), will be followed by performances from the School of Music, Theatre, and Dance at 8 p.m. and then a dessert reception and community fireworks. All events will be held in the A&E leading into the fireworks, which will take place outside the building.

Cornish took office in March 2022 after serving as interim president since August 2021. Prior to becoming president, she served as the provost and executive vice president of academic affairs.

Dave Prunty, revenue generation and special projects coordinator for the Office of Finance and Administration and co-chair of the Inauguration committee, said the committee began meeting in late Spring 2022 and that a large group of students, faculty and staff have come together to collaborate on this event.

The Ithaca College Chorus will be performing along with the Ithaca College Wind Ensemble and the members of the African Drumming and Dance Ensemble. There will also be student performances of “Into The Woods” and “Sweat,” a 2015 play by Lynn Nottage about the working class in Reading, Pennsylvania.

“The inauguration of President Cornish is not only a college community event,” Prunty said via email. “It is a celebration of the Ithaca College student experience and living examples of the concept of ‘Theory, Practice, Performance.’”

Students from the live event production major are involved in stage managing and producing the event and students from the Department of Theatre Arts are working in the A&E center on the venue set-up, lighting and sound.

Senior Rachel Kaiser, who is on the marketing team for the inauguration committee, said she was recommended to the committee leader by a professor in the live event design and management minor to work on the team.

Kaiser said that preparing for the event has been a great experience and that it has been satisfying seeing all the pieces come together.

“From a student lens, I feel honored to be a part of this process,” Kaiser said via email. “It is really nice to be able to represent the IC student body and what I think students’ values are when it comes to this exciting day.”

The Presidential Inauguration will be held the same weekend as Family Weekend and the annual Apple Harvest Festival, two significant events that bring many people into the Ithaca community.

“The weekend of Sept. 30 [to] Oct. 2 is a very busy one in the Ithaca community,” Prunty said. “As a result, some challenges included the availability of resources for planning and executing the inauguration events.”

Prunty said the purpose of the event is to officially instate the president to office while establishing the vision the president has for the college.

“Every president of every college or university brings their own personality, focus and goals to the position,” Prunty said. “As a result, the inauguration of President Cornish has been designed to focus on the theme of ‘Ithaca Together,’ which focuses on inclusivity and the importance of the Ithaca College community.”

Sophomore Abby Dinstell got involved with the presidential inauguration through the Ithaca College Chorus, which was scheduled to perform at the event. Dinstell said the opportunity to gain more performing experience and to get to see the other groups’ talent was what excited her the most. She said that with the upcoming dress rehearsal at the end of the week, she was happy to see that all the hard work had paid off.

“It is also nice to know we are honoring the new Ithaca College president in the process and making her feel excited and inspired to lead this school to future success,” Dinstell said via email.

Junior Gillian Coffey said she was most excited about the sense of community that would hopefully come from inaugurating a new president.

“President Cornish seems to be an incredibly kind, fun and passionate leader who really cares about her students,” Coffey said via email. “I believe she will lead Ithaca College incredibly well and with a lot of compassion.”