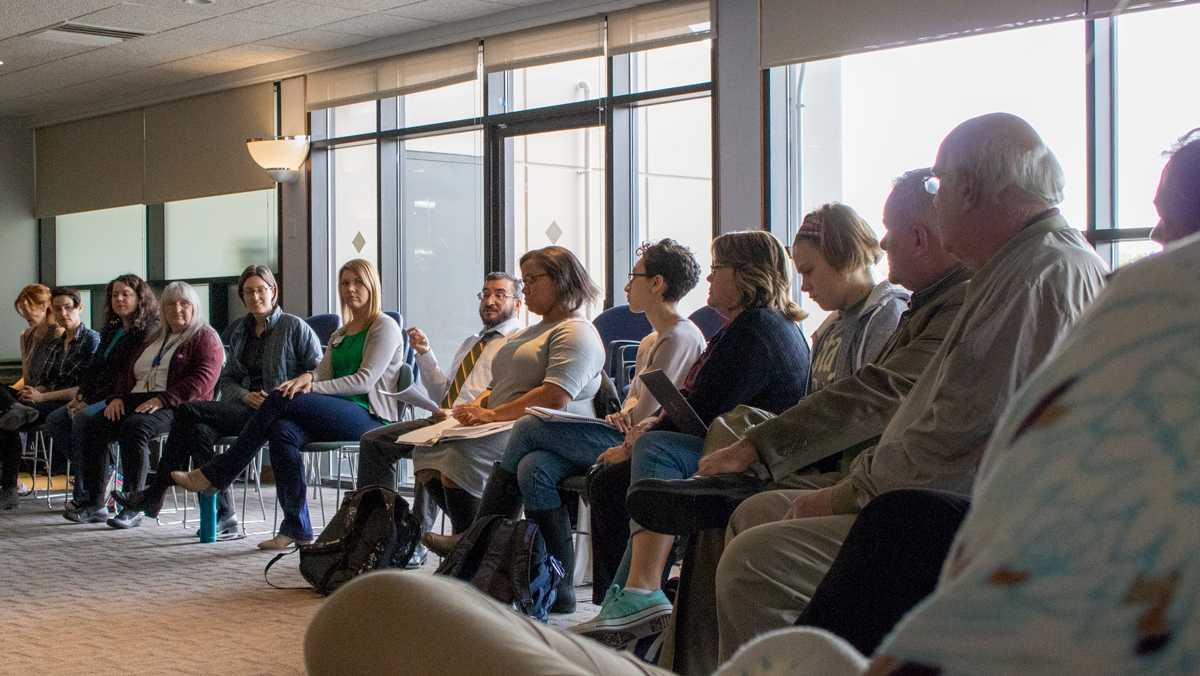 Caroline Brophy/The Ithacan
Members of the Ithaca College community attended an event held by the Division of College Relations and Advancement on Oct. 23 in Clark Lounge. The event was held in honor of LGBTQ history month.
By Elizabeth Henning — Staff Writer
Published: October 24, 2018

Approximately 40 students, faculty and staff gathered at an event held Oct. 23 in Clark Lounge to discuss LGBTQ inclusivity and how non-LGBTQ people can make spaces more inclusive at the college.

This Diversity and Inclusion Discussion Circle was organized by the Division of College Relations and Advancement, and the theme was chosen to recognize LGBTQ history month, which is celebrated in October.

The discussion was led by Luca Maurer, director of the Center for LGBTQ Education, Outreach and Services; Sybil Conrad, director of Campus Center; and Sayre Wilson, student financial services specialist. The three discussion leaders shared their experiences coming out and suggested ways that non-LGBTQ people can be more inclusive. The group also questioned the recent Trump administration policy proposal that could redefine “sex” under Title IX and remove many legal protections that transgender people currently have against discrimination.

Maurer said he thinks the proposal is a way for the administration to justify hate against people who are transgender.

“It tries to make the beauty of human diversity and natural biological diversity — it tries to make it so it doesn’t exist,” Maurer said. “It would establish a right to discriminate against people who are transgender, right now.”

Maurer said he thinks the best course of action people can take is to challenge the administration publicly using their First Amendment rights. He said public pressure could cause the president to rethink the proposal.

The Center for LGBTQ Education, Outreach and Services has been working with students following the announcement, and Maurer said they will continue to support the anti-discrimination policies in place on campus. The center posted on its Facebook page a message of support to members of the transgender community in response to the president’s policy proposal announcement.

“Trans, nonbinary and intersex folx have always existed,” the center wrote via Facebook. “Racism, colonialism, misogyny, and classism conspire to reinforce powerful structures of oppression. The connections and bonds we weave are stronger. We stand with you. We affirm you. We support you.”

Maurer said it is important to respect the experiences of others and their views.

“There are many individuals in this group who really want to do the right thing, but it is not always crystal clear what the right thing is,” Maurer said. “Part of the goal of this discussion is to talk a little bit about that but also to be really mindful of intent and impact. Sometimes our intent might be very good, and the way we say something or the way we do something might have the opposite effect.”

“I hadn’t shared this with anyone on the planet ever,” Conrad said. “So I said, ‘I’m diverse!’ And that’s what I came up with, because of that pin.”

Wilson also shared her experience coming out at age 12.

“I feel as if I have to come out every single day of my life,” Wilson said. “For some people that we interact with, we have this presumption of what gayness is or what diversity looks like or what we expect. … People come in all different packages, and they have all different identities.”

She said it is important and meaningful for people to be open to the diversity within the LGBTQ community, because having to constantly come out and justify their existence is a burden and tiring for members of the community.

Maurer, Wilson and Conrad agreed that the most important part of inclusivity is respecting others.

“Using the pronouns and the names that we name for ourselves is a central component of conferring dignity and respect on each other,” Maurer said.

The discussion also turned to International Pronouns Day, which was celebrated Oct. 17, and Maurer’s role in its creation.

The lecture was mostly attended by faculty and staff. Senior Morgan Brunson attended the event and said it is important for people to consider how their actions affect others.

“It’s just really important to listen,” Brunson said. “Now we just have to process this and think of what to do next.”

Diversity and Inclusion Discussion Circles will occur throughout the year and are a shared initiative among all divisions in the college. Each division will plan and lead a discussion.