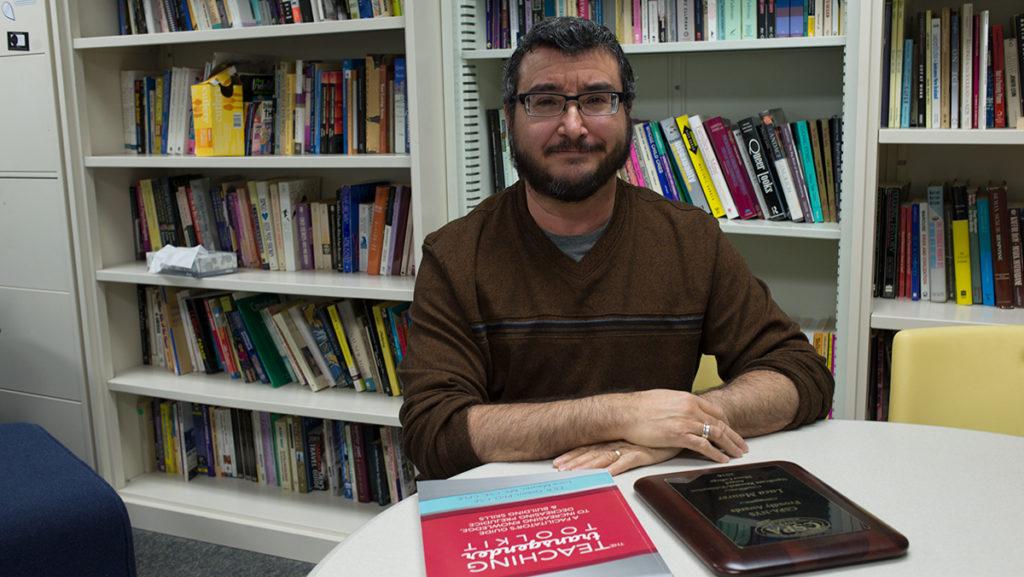 File Photo/The Ithacan
Luca Maurer, director of the Center for LGBT Education, Outreach and Services, sat on the executive board that helped establish the holiday along with other members of a professional organization of campus LGBTQ directors.
By Mary Rand — Contributing Writer
Published: October 1, 2018

International Pronouns Day, a new holiday founded in part by contributions from Ithaca College and recognized by Ithaca Mayor Svante Myrick, will have its first observance Oct. 17.

Luca Maurer, director of the Center for LGBT Education, Outreach and Services, sat on the executive board that helped establish the holiday along with other members of a professional organization of campus LGBTQ directors. Nearly 200 organizations have now endorsed the holiday, according to the holiday’s website, including the college’s LGBT Center.

The City of Ithaca mayor’s office has prepared a proclamation endorsing the holiday for Ithaca as a whole.

“Referring to people by the pronouns they determine for themselves is basic to human dignity,” the proclamation said. “Ithaca is committed to being inclusive — priding itself as diverse, accepting and supportive of all individuals, families and communities.”

Maurer said the goals of International Pronouns Day are multifaceted and intersectional but primarily focus on normalizing the asking, sharing and respectful use of an individual’s personal pronouns. It is also about recognizing the possible dangers some individuals often face in using particular pronouns, he said.

“It’s not just important,” Maurer said. “It’s required to call people by the pronouns they use to confer basic dignity and respect.”

The holiday also examines stigmas around transgender individuals and the violence against them, particularly transgender women of color, Maurer said.

“We really want to surface how insidious structural racism, misogyny and classism all interweaves together to cause oppression,” Maurer said.

The LGBT Center plans to organize a social media campaign to raise awareness for the holiday. A public event will also be held at the college Oct. 17 to bring recognition to International Pronouns Day.

Maurer also said other administrators at the college are excited to participate and utilize their positions to help promote the event, Maurer said.

Promoting the use of proper pronouns is not new at the college. A file cabinet in the LGBT Center is now devoted to storing pronoun-identifying pins, Maurer said. Maurer has also sent out campuswide emails in the past reminding faculty and staff to be mindful about pronoun use and ask students for their preferred pronouns.

Sophomore Katie Conte said they support the holiday to increase awareness about pronouns that exist beyond the binary ‘he’ or ‘she’ pronouns. They said they like how the holiday shines a light on the ‘they’ pronoun and the fact that not all trans people use binary pronouns — they said people often think that binary trans people like Caitlyn Jenner serve as an example for all trans people.

“People just don’t know how to use them,” Conte said. “I feel like when people think of trans people, they just think of Caitlyn Jenner.”

Freshman Aiden Nelson, who uses they/them pronouns, supported the holiday and said they hope it would help normalize mindfulness around pronoun use but said they want more to be done at the college to help promote use.

“You definitely have to speak up [to share your pronouns], which is awkward and uncomfortable,” Nelson said, referring to professors who do not ask students’ pronouns. “I would like … teachers to know it isn’t assumed.”