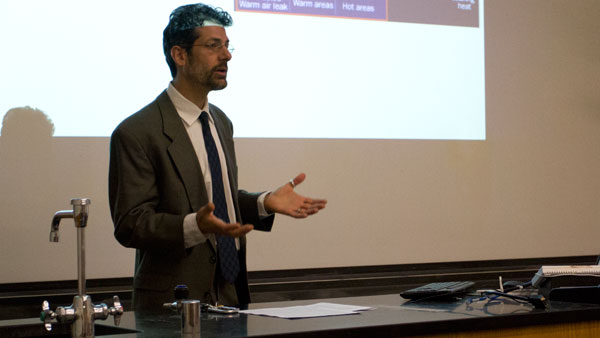 About 50 students and faculty members attended the eighth Sustainability Café of the semester, which took place at 4 p.m. Monday in the Center for Natural Sciences, room 112.

Metz discussed his education and career path. He then dove into discussing the movement to decrease greenhouse-gas emissions and educate the public about how to heat their homes more effectively.

He received a degree in biology from St. Mary’s College of Maryland and then went on to pursue a master’s degree in journalism from New York University’s Science, Health and Environmental Reporting program. After college, Metz worked as a medical editor at Memorial Sloan-Kettering Cancer Center, a freelance reporter and a self-employed carpenter.

“How I got to where I am today — it’s a lot of jumping around,” Metz said. “Anyone who’s my age would say that it’s not a straight path to get there, you sort of bounce around and end up where you are.”

The presentation focused on using renewable energy sources like biomass, which is made up of living material like plants, as fuel and decreasing the amount of fossil fuels used in the area. Educating community members about climate change and being more energy efficient could, in turn, create more jobs and benefit the environment, Metz said.

Metz wants to improve the energy efficiency of homes in the community as well as find additional energy sources, like geothermal, biomass fuel or solar thermal power, which is used to heat water.

He talked about the movement to shift power sources from oil and propane to renewable sources like wood stoves or pellet stoves. Pellet stoves burn pellets made up of sawdust, biomass and other wood-waste material.

“It’s a great idea — the fact that they are trying to go local with it will definitely be beneficial,” Clavet said. “When I get my own home someday, I want to be more energy efficient and green.”

Currently, Metz is running a program that aims to educate the community about renewable energy and the benefits of pellet stoves to the environment, Tompkins County and the bank accounts of community members.

“There are about 8,000 households in the county that burn oil or propane,” Metz said. “If we just took 10 percent of those, so 800, overall they would save about $1.5 million. It also turns into about 8–10 permanent jobs for every $1 million that stays in the community.”

Metz and his colleagues at the Renewable Energy program are promoting biomass heating and the importance of heating with wood responsibly. According to Metz, 70 percent of all wood stoves in the U.S. are pre-1990 and are not certified by the Environmental Protection Agency. The renewable energy program is trying to change that and launch a public education campaign to reduce wood stove emissions.

“We’ve done several wood stove change-out programs, and what that does is get rid of the older wood stoves that pollute the air and gives you a rebate for a newer one that gives off less pollution,” Metz said. “It gives people an incentive to upgrade to a newer wood stove.”

Metz said he hopes the program will help to reduce harmful emissions in the environment and draw the community’s attention to the benefits of renewable energy.

“By replacing the older polluting units with more efficient biomass heating, this program could save hundreds of cords of wood each year because of the efficiency [of the new stoves],” he said. “It would also help to build the biomass industry in Tompkins County and improve the health of our forest and, overall, raise awareness of harmful effects of wood smoke.”

Freshman Alex Abrahams said he has experience with pellet heating and thinks it is valuable to the green energy movement.

“My friend has a pellet stove, so I know firsthand that it works,” Abrahams said. “It’s really interesting and fun to use. If it’s saving energy and it’s saving money, that’s a good thing.”