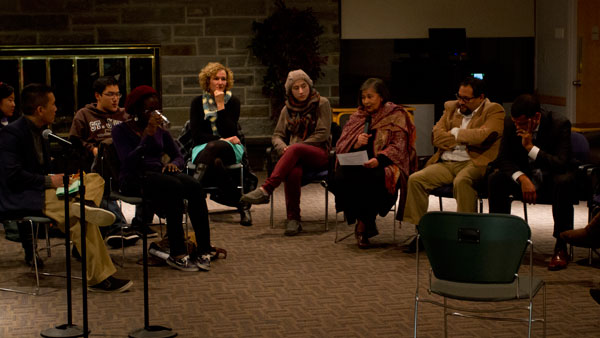 The Center for the Study of Culture, Race and Ethnicity held an informal workshop Nov. 11, where students and faculty participated in an open dialogue about the language of racial justice.

The workshop, which was held in Clark Lounge in the Campus Center, was the last event in this semester’s CSCRE discussion series. The goal of the workshop was to create a space for students and faculty in the CSCRE to have a discussion about what language means to them.

The session began with CSCRE faculty members discussing the relationship between language and culture and the role of language in racial justice.

During his portion of the workshop, Phuong Nguyen, assistant professor in the CSCRE, said there are potential problems with the term ALANA, which is used to describe African, Latino, Asian and Native American students.

“I personally wonder if a term like ALANA … unintentionally distances us from a history of resistance to oppression and reduces our racial differences to a set of biological distinctions,” Nguyen said. “We’re entering dangerous territory where we think race is something we’re born with as opposed to something we acquire from society.”

Jessica Barros, assistant professor of writing, used her portion of the workshop to discuss the complexities of black language. Barros said an understanding of this language goes beyond grammar and word choice.

After the initial discussions, participants were split into five smaller groups to individually discuss what language means to them. Through this dialogue, students shared their experiences and opinions about language.

The workshop closed with the groups coming back together for an open discussion. Asma Barlas, professor and program director of the CSCRE, said she was concerned about this year’s discussion series because it has not included a focus on the rest of the world.

“What’s missing in our discussions is how we can create a desire for mutual recognition and respect between U.S. people and the rest of the world,” Barlas said.

However, Barlas said she hopes members of the CSCRE will expand their ideas of racial justice to include more than just people in the U.S.

“I hope that the people who are doing racial justice work will expand the notion of post-racial,” Barlas said. “I don’t think that’s asking for too much.”

This article has been revised to reflect the following corrections. Correction, November 14, 2013: