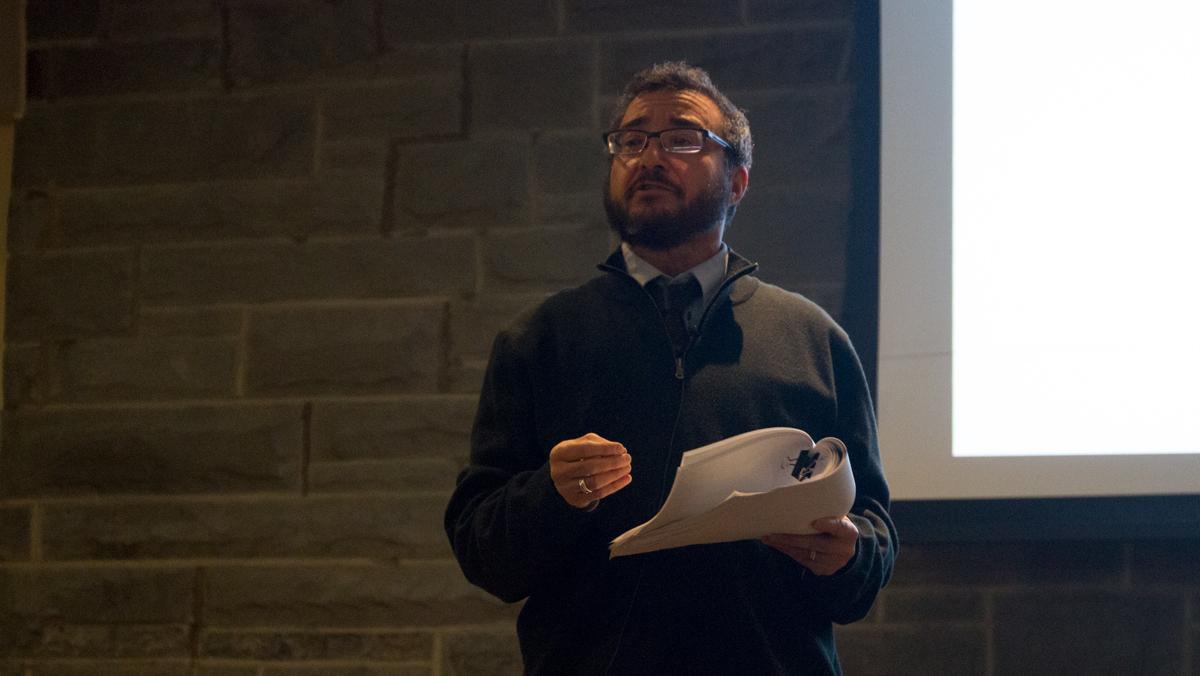 The presentation titled, Queering Colleges, Transforming Campuses: Intersectionality, Action, and Change, was a part of the Center for the Study of Culture, Race and Ethnicity’s year-long discussion series about intersectionality and resistance.

Maurer said intersectionality is a crucial aspect of the role of the Center for LGBT Education, Outreach and Services at the college because no individual on campus has one singular identity. As a result of this, the resources of the center expand beyond LGBT outreach and also address these other identities on campus.

“Some people think that the work of the LGBT center is about sexual orientation and gender identity,” Maurer said. “That’s really not my orientation to the work. It is about so much more. It has to be about race, and ethnicity, and socioeconomic status and faith … Students don’t come to campus with a singular, isolated, siloed set of identities that are all separate.”

Maurer continued to discuss this intersectionality with an overview of the general goals and history of the LGBT center. Freshman Sam Haney, an executive board member of Prism, a club that meets weekly to discuss queer issues and to plan LGBTQ–related events, said they were unfamiliar with this history. Haney attended the presentation for a queer studies class and said he felt that the presentation was informative and relevant, but also said many in attendance were likely already aware of the importance of intersectionality.

“The people who typically come to these talks are the people who have already been thinking about [intersectionality],” Haney said. “But it can further thoughts and conversations, and give people more energy going forward.”

Maurer also discussed the lack of intersectionality in the media coverage of historic LGBTQ events. Maurer utilized the 1969 Stonewall riots, a response by the LGBTQ community to a police raid, as an example of a time when media coverage determined the historic narrative of LGBTQ activism. Despite what popular movies and mainstream media portray, the Stonewall riot was not the first instance of LGBTQ community members rising up against police brutality. The significance of trans and gender–nonconforming people of color in this event is often overlooked as a result of non-intersectional media coverage, Maurer said.

This misrepresentation of complex events that includes intersectional identities and issues is still prevalent in today’s media coverage, Maurer said. Many news sources fail to provide a complete and multifaceted perspective on many subjects which require an intersectional lens to be fully understood and interpreted.

“It seems that media likes to pick–up on the most binary, either/or, black–and–white message,” Maurer said. “I am very dismayed that I don’t really see very much media that’s interested in anything more nuanced.”

Belisa Gonzalez, associate professor and director of the Center for the Study of Culture, Race and Ethnicity was also pleased with the attendance of the event.

“I had no doubt that Luca was going to draw a really large crowd,” Gonzalez said. “It’s always great when we have to add extra chairs.”

A few of the students in attendance were not even from the college: Seniors Annabelle Lee and Chandler Smith came to the event from Wells College. Wells just established its first LGBTQ center, partially as the result of the advocacy of these students, who cited Maurer and his work as an inspiration for some of the changes they instigated at their school.

“Even coming here is just so different,” Smith said. “At our school, I feel like it’s the same few people, and then this was just such a big turnout, so that was cool to see.”

During Maurer’s presentation, a conversation started about the college’s lack of a queer studies major. This topic of conversation continued when a large portion of those in attendance expressed interest, and Carlie McClinsey, Student Governance Council president, offered an opportunity for interested individuals to become involved in reviewing past attempts to create the minor. Alum Kyle James, past vice president of academic affairs, wrote a bill in 2013 recommending the creation of a queer studies minor at the college that was approved by the SGA, but the bill, and a second bill on the same topic passed in 2014, never came to fruition.

“Now I have a list of six or seven people that are going to meet, hopefully next week, and really get this started,” McClinsey said. “It’s clear that it’s a need on campus. The campus climate service reiterates the thought that we do need a queer studies minor on campus.”

Harriet Malinowitz, a lecturer in the writing department who has taught queer studies courses in the past, said a queer studies minor would be incredibly impactful at the college, especially because of the seemingly high student interest in the subject.

“We already have so many people who are interested in queer life and reality in general,” Malinowitz said. “But I don’t think most have been exposed to the perspective of queer studies, an intellectual interdiscipline. I think that even for people who come out of queer activism, when they come into curricula that really explores questions that haven’t been completely explored, it changes their view of things, and it changes their view of how to organize things too.”