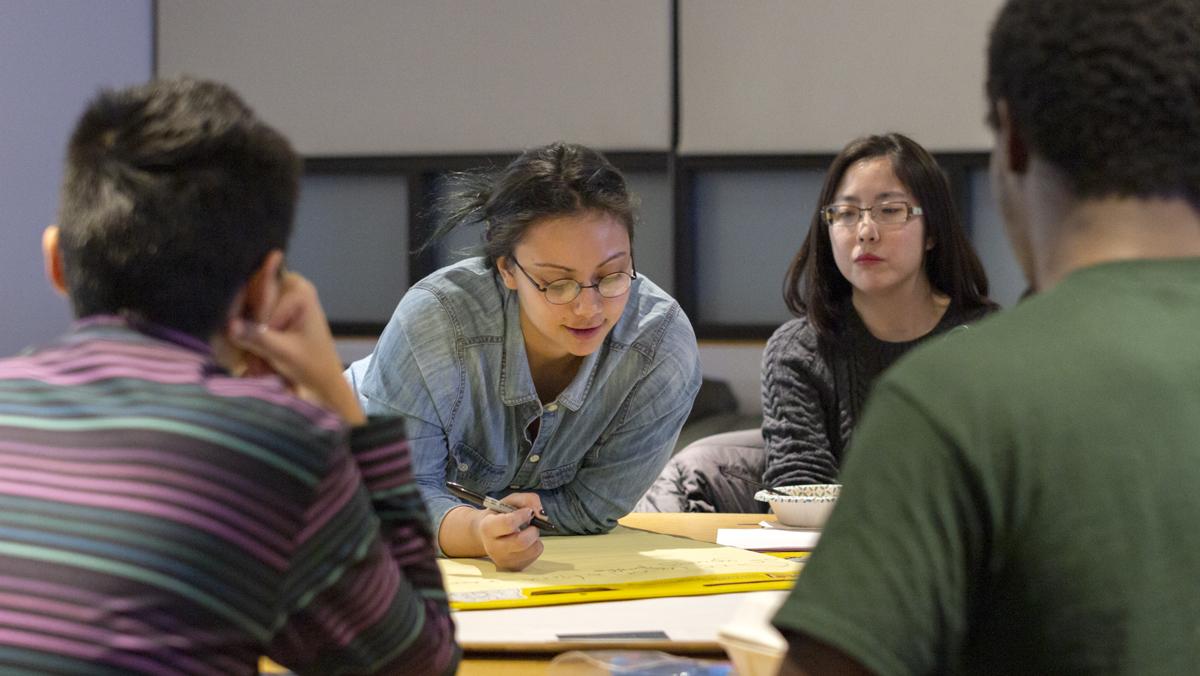 Lexi Danielson/The Ithacan
Senior Diana Mejia works on a Pixar pitch calling for the enactment of the Center for the Study of Culture, Race, and Ethnicity’s newest major to be implemented at a campus discussion Feb. 6.
By Julie Dannevig — Staff Writer
Published: February 19, 2020

On Feb. 6, Ithaca College students and faculty filled Clark Lounge as they discussed, questioned and worked collaboratively to develop the Center for the Study of Culture, Race and Ethnicity (CSCRE) major called Race, Power and Resistance.

Through CSCRE, the college offers minors in African Diaspora, Asian American, Latino/a, Native American and Indigenous studies. Belisa González, CSCRE director and associate professor in the Department of Sociology, said approximately 70 students are currently enrolled in CSCRE minors. She said the major is not official yet, but those involved in CSCRE are working to have it offered at the college in 2022.

She said CSCRE is developing the Race, Power and Resistance major to offer a more complete understanding of history and different cultures from around the world.

The event was hosted by CSCRE and opened with an activity in which students and faculty worked together in groups to create pitches for the story behind the Race, Power and Resistance major. González instructed the groups to create this pitch by starting with, “once upon a time.”

González said the groups should use this exercise to explain the process of creating the major and express what it means to them. After approximately 15 minutes, the groups shared their pitches with the room.

“Once upon a time, there was a group of young professionals who every day experienced widespread disillusionment due to the structural ignorance of the education system,” one group said. “One day, we realized that we deserve to know our own history beyond the lenses of white Americans. Because of that, we decided to take action. Because of that, we made changes to our outdated curriculum. So finally, we came together as one and created Race, Power and Resistance, a major designed to fight back against traditional history and white supremacy.”

The other groups’ pitches included similar ideas, like wanting to update current curriculums to include learning about different cultures and all sides of history.

“So finally, after struggling long and hard, [students and faculty] created the major Race, Power and Resistance so they could not only learn their histories but also create new ones,” a group said.

Students were later given the opportunity to share ideas, questions and concerns about the major with faculty members in CSCRE. González prompted the audience with questions like, “What is missing from your education?” and “What will the goals and priorities [of the major] be?”

The students gave suggestions for classes and workshops relating to the major. Senior Diana Mejia said she wanted to see more faculty in CSCRE as well as a designated space for student engagement.

“Right now, [the curriculum] is very generalized, and I think it would be really neat to have optional courses where you can learn about specific countries and tribes,” Mejia said. “Right now, [the college offers] Asian Studies, Latinx and Indigenous studies. But when you look at it, they all have subcultures, and they’re all very different, so learning about them as a generalized things can be very misleading.”

González said the purpose of this event was to hear the students’ inputs and ideas for the major to help to ensure a well–rounded and collaborative basis for Race, Power and Resistance.

“We thought that it was absolutely imperative that we hear from them and that they help us break out of the curriculum woes that we tend to get bogged down in and help us really try to imagine what is possible,” González said.

Senior Evan D’Amaso said he attended the event to help to design this major in a way that will be interesting and welcoming.

“If they had the major when I started school, I would’ve loved to hear about it. So if I can be a part of making it and influencing what it will be in the future, I’d love that,” D’Amaso said.

Junior Chanelle Ferguson said that she attended the event to support CSCRE and that she values the sense of community that it offers.

“I hope that students are able to have a foundation, a home and find a sense of safety within this campus through these classes,” Ferguson said.

Junior Carolina Jeronimo said she hopes the major will be a way for prospective students to learn about themselves and their peers in a safe and welcoming environment.

“I think [the major will incite] more student interaction and learning more about your identity and how you can be involved with more communities and your culture, different aspects about who you are,” Jeronimo said.