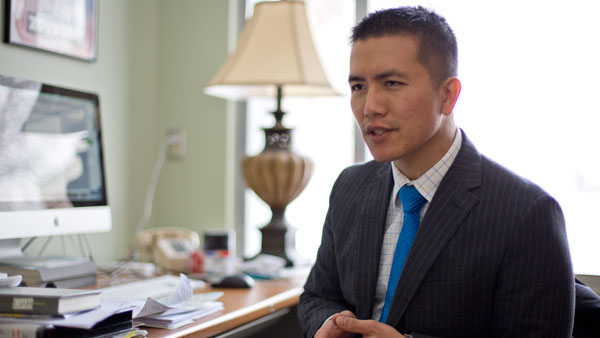 Corey Hess/The Ithacan
Phuong Nguyen, assistant professor in CSCRE, will hold a presentation called “Crisis, Opportunity, and Antiracism” from 7 to 9 p.m. March 6 in Emerson Suites as a part of the spring discussion series.
By Haley Doran — Contributing Writer
Published: February 12, 2014

Students will have the opportunity to hear from professors and artists about the role of language in racial and social movements during the Center for the Study of Culture, Race and Ethnicity’s spring discussion series.

The eighth annual discussion series, titled “Just Cause? Just Language? Just Us?,” kicks off March 6 with reflections on the challenges to racial injustice, particularly through the use of color-blind language such as “illegal immigration” and “model minorities.”

According to the CSCRE website, the series is part of a curriculum that has aimed to address the needs and experiences of underrepresented minorities in the United States education system since the center’s founding in 1999.

Asma Barlas, professor in the Department of Politics and program director for the CSCRE, said today’s language toward different races, such as “undeserving welfare recipients” and “terrorism,” is often taken out of context.

“There is a civil rights discourse about justice, racial equity and racial redress, and this language was considered progressive because it was a way to address the institutional racism that exists in the United States,” she said. “What has happened since then is that language has been taken over by the right, which has corrupted the racial meaning or the ways that language has been used.”

Phuong Nguyen, assistant professor in the CSCRE, will present the first discussion in the series, “Crisis, Opportunity and Antiracism,” from 7 to 9 p.m. March 6 in Emerson Suites. Through historical examples, Nguyen said, he will be explaining how different ethnic and racial groups were able to climb the social ladder at the expense of another group. He will then shift the presentation’s focus to the present and talk about ways the community can rethink social justice and anti-racism, he said.

“I’m hoping that people understand that we are not passive agents in the history that occurs in this country,” he said. “We make history too. Change happens because everyday people fight to make it happen, whether it is change for the better or change for the worse.”

Latino artist Cruz Ortiz from San Antonio, who uses contemporary art practices to represent cultural and political movements from his bicultural home, will lead the next discussion, “Hecho Farm.”

While Ortiz is at the college from April 8–9, he will stage a pop-up print shop in the Handwerker Gallery where students interested in Ortiz’s work will be able to pull his prints, Mara Baldwin, director of the gallery, said. His discussion will take place 7–9 p.m. April 8 in the gallery.

Later the same month, Ruth Gilmore, professor of geography for the City University of New York, will hold a discussion called “Organized Abandonment and the Infrastructure of Feeling,” which will take place from 7 to 9 p.m. April 24 in Emerson Suites. Barlas said Gilmore will highlight issues with the American prison system.

“Gilmore is known for her seminal work on the prison-industry complex in the United States,” Barlas said. “She has inspired generations of people working in the area of ethnic studies.”

Senior scholars in the Martin Luther King Scholar Program will conclude the discussion series with a presentation titled “Just Cause? Just Language? Just Us?” Barlas said their presentation will feature a culmination of what they have learned over the past four years and how it connects to the topic of racial injustices in language.

Senior MLK Scholar Olivia Mendoza said this presentation, which will take place April 29 in the Clark Lounge of the Campus Center, is a special way to summarize what she and her peers have learned through their participation in the program during the past four years while relating back to the theme of the discussion series.

“It is very diverse because we all come from different majors and different places, so it’s interesting to all come together on the central point of the discussion series,” Mendoza said.

Mendoza said the attendance for the discussion series varies by the discussion topic. She said many of students who attend are in an academic program that relates to the series, but there also tends to be many students, like those studying sociology, women’s studies or ethnic studies minors, who are already interested to learn more about racial injustices.

Barlas said the discussion series is a valuable way to get the Ithaca community involved and more aware of serious topics regarding race.

“This is a wonderful way to have a dialogue not just across our own campus but also with people in our community and people from farther away,” Barlas said. “It is an opportunity to know things outside of what you already know and to expand your horizon.”