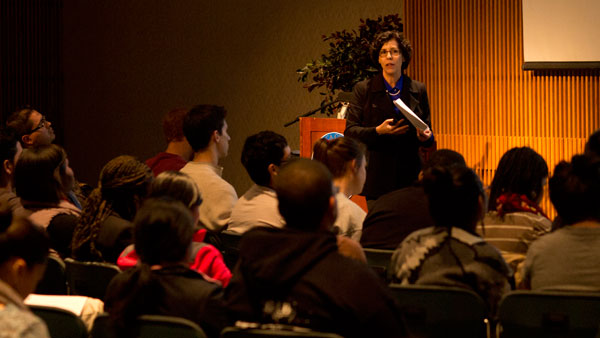 By the dictionary’s standards, race and ethnicity are static concepts. However, more than 40 students, faculty and community members explored their active roles in “doing” race and ethnicity while attending a presentation Tuesday in Emerson Suites.

Paula M.L. Moya, associate professor in the Department of English at Stanford University, explored the language around these concepts during her presentation, “8 Conversations About Race & Ethnicity.” Moya kicked off the Center for the Study of Culture, Race and Ethnicity’s discussion series “Just Cause? Just Language? Just Us?” Tuesday night in Emerson Suites.

Moya addressed about 45 students, faculty and community members. The conversations included: “We’re beyond race,” “Racial diversity is killing us,” “That’s just identity politics,” “Race is in our DNA,” “Everyone’s a little bit racist,” “It’s a black thing, you wouldn’t understand,” “Variety is the spice of life,” and “I’m ___ and I’m proud.”

Gustavo Licon, assistant professor of Latin American studies, said this year’s theme, “Just Cause? Just Language? Just Us?” is a play on words for “justice” and highlights how language in our society is broken.

Licon is on a year-long leave from Ithaca College to research modern anti-colonial struggles throughout the Americas. He received the Career Enhancement Fellowship for Junior Faculty from the Andrew W. Mellon Foundation and administered by the Woodrow Wilson Foundation. Licon returned to the college for the kickoff event of the series.

In a book cowritten by Hazel Rose Markus and Moya called “Doing Race,” Moya defined race and ethnicity as two broad processes, one positive and one negative.

The negative definition of race is mistakenly defined as a “doing” that emerges when groups are seen as a threat. It is a system that classifies people based on superficial characteristics, such as physical attributes and behaviors, that are often imagined to be negative, innate and shared, Moya said.

The positive aspects of claiming a race or ethnicity include the ability to identify with people on the basis of presumed and claimed commonalities, such as language, history, customs and religion.

“Race is a system of social distinction,” Moya said. “Deeming it social hierarchy or biological determinism is inadequate, because that obscures why race came to be and why race persists today.”

Moya said the best way to talk about race is by approaching diversity differently. Everyone has to create new ideas and practices through both institutions and behavior, she said.

Though there were eight conversations introduced, only four common conversations about race and ethnicity were explained because of the complexity of the topics. Moya presented “Variety is the spice of life,” “Everyone’s a little bit racist,” “Racial diversity is killing us” and “Race is in our DNA,” which are the most popular conversations.

During the discussion, John Suter, audience member and Ithaca resident, responded to the common conversation with, “Everyone’s a little bit racist.”

“People are really thinking about how to address structural racism in this community,” Suter said. “For both groups, being able to listen to people tell about being followed in a grocery store or having to tell their kids, ‘Don’t touch anything’ is a reminder how the daily insults of racism are personal and within our social construction.”

Moya said the eight conversations often play a role as conversation enders, rather than starters. They dismiss race and ethnicity as a progressive and ever-changing process, she said.

Licon shared an anecdote with the audience about when he was stereotyped by another Latino in his apartment complex when returning home for the night. Licon was mistaken for a “flyer guy,” a person who goes from door to door handing out pamphlets. He posed a question to the audience based on his perspective: How do we communicate, and how does race affect all of us, even within cultures?

The conversation then segued into remarks from the audience as to how the topic of diversity should be communicated. Suter spoke of talking circles that members of the Ithaca community hold on The Commons each week.

“The idea is to bring people of color and white people together for a facilitated conversation,” Suter explained. “People share back and forth of when they became aware of race, and the conversations get deeper and deeper as weeks go on. For many people, it’s the first time they’ve felt safe enough to say how they really feel and what it’s been like for them.”

Suter said the talking circles create a space where community members can have cross-cultural dialogue.

“People come out of those sessions often not knowing what to do with it, but people make changes and make friends across cultures,” he said. “There’s a momentum in the community that’s spinning conversation into action.”

Freshman Alex Horner, who attended the event, said he was surprised and interested to see how deep emotions run with racial conversations.

“It’s a shocker to see how off communication can be with people,” Horner said. “Coming from Vermont — it’s such a white state. It’s not so much a culture shock because I understand it, but to actually see the emotions is moving.”