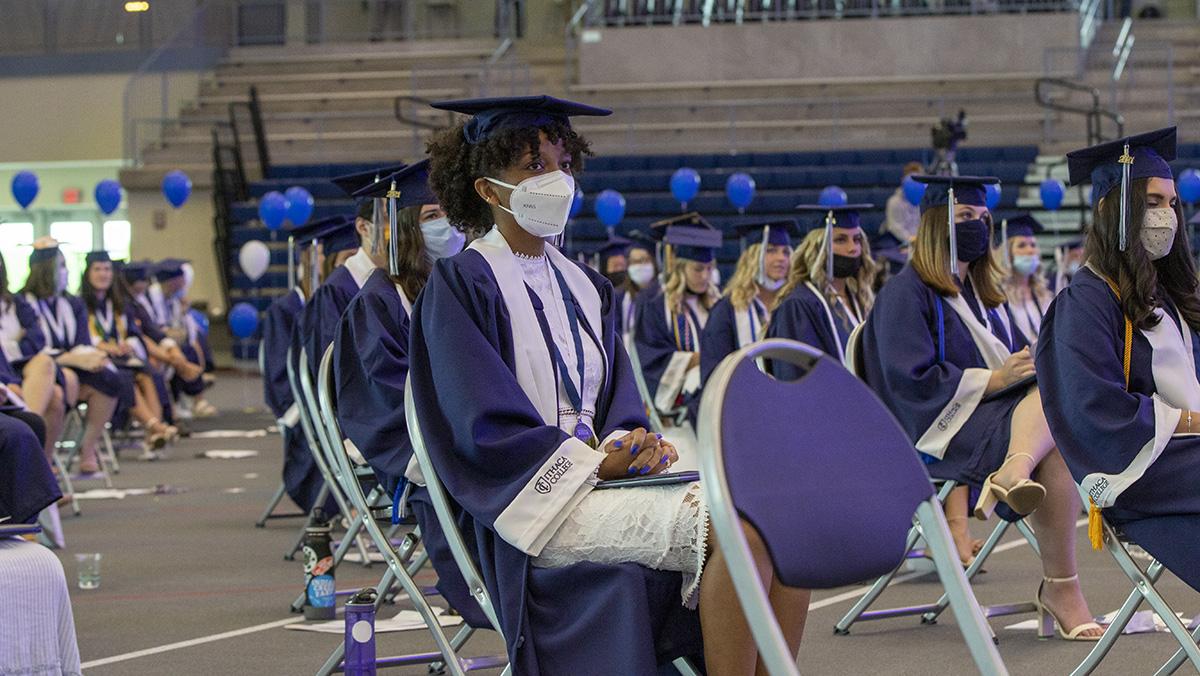 Arla Davis/The Ithacan
Students planning to graduate in December will no longer be able to attend the May Commencement ceremony with the rest of their graduating class beginning in December 2022.
By Caitlin Holtzman — News Editor
Published: September 2, 2021

Some Ithaca College students have expressed mixed feelings about recent changes made to December Commencement, which will go into effect in December 2022.

Doreen Hettich-Atkins, executive director of the Division of Student Affairs and Campus Life, said that December graduates will now receive their diploma covers and medallion at the December Commencement. She said that at the old December ceremony, graduates would not receive their diploma cover or medallion, nor would they have the opportunity to walk across the graduation stage.

December 2020 graduates were able to attend the May 2021 Commencement that was held May 23 in the Glazer Arena in the Athletics and Events (A&E) Center.

Hettich-Atkins said that in the past, the president, provost and senior class president would speak at December Commencement and graduates would receive a corsage. Typically, there are 200–400 December graduates, Hettich-Atkins said. She said the new ceremony will take place in the Glazer Arena in the A&E Center and students will wear caps and gowns instead of formal attire, which has been worn at previous December graduation ceremonies.

Hettich-Atkins said the change came from some feedback from students who were unhappy with there being no individual recognition or walking across the stage at December Commencement.

“It seemed a little bit of a let down for our December graduates who worked just as hard as our students who graduate in May to only have a reception and to not have that ability to walk across the stage and put on the cap and gown,” she said.

Hettich-Atkins said the number of guests students will be allowed to bring is still unknown due to limited seating in the A&E Center and what the state of the COVID-19 pandemic will be in a year. However, she said that there will be some number of family and friends that will be able to come. For the May 2021 Commencement, students were not allowed to have guests in the A&E Center. Families and supporters watched the ceremony via livestream on Zoom or YouTube.

Senior Vedant Akhauri said he is graduating early in December 2021 and will not be affected by the graduation ceremony change. He said he feels guilty knowing that he is the last class of December graduates that will be able to participate in both commencement ceremonies.

“I always planned to graduate in December and then walk in May with a lot of my … friends, so I feel kind of privileged in a way,” he said.

Akhauri said he has mixed feelings about the future change. He said that not allowing December graduates to come to the May ceremony makes the later commencement less crowded. However, he said it may also be difficult for family members to travel in December because of the harsh Ithaca winters.

“Being able to come to the May graduation would be more convenient for some people, but it also varies from person to person,” she said.

Shingler said she thinks some students may enjoy the smaller December Commencement, but some may want to be a part of the larger May Commencement as well. She said that while she is not overly attached to the May ceremony and is ok with not walking, other students may not feel the same way.

“It’ll definitely be really weird to not be able to walk the stage at the same time that the people that I entered college with, my peers, will definitely be weird,” she said.

Senior Dante Furco said he is also graduating in December 2021 and he said he likes the idea of a larger ceremony in December. He also said it is disappointing that students will not be able to walk in May as well.

“For some students, graduating early is a big deal and should be celebrated, but now students must choose whether they want to walk the stage early or graduate with their friends,” he said via email. “That is a decision they should not have to make.”

He said the change puts future students in the unfortunate position of choosing if they want to graduate early if they are on track to do so or decide to push their graduation to May so they can walk with their friends. Furco said students should be celebrated as many times as possible.

“These past few years were hard, both mentally and physically,” he said via email. “Let’s celebrate the students graduating at every chance we get.”