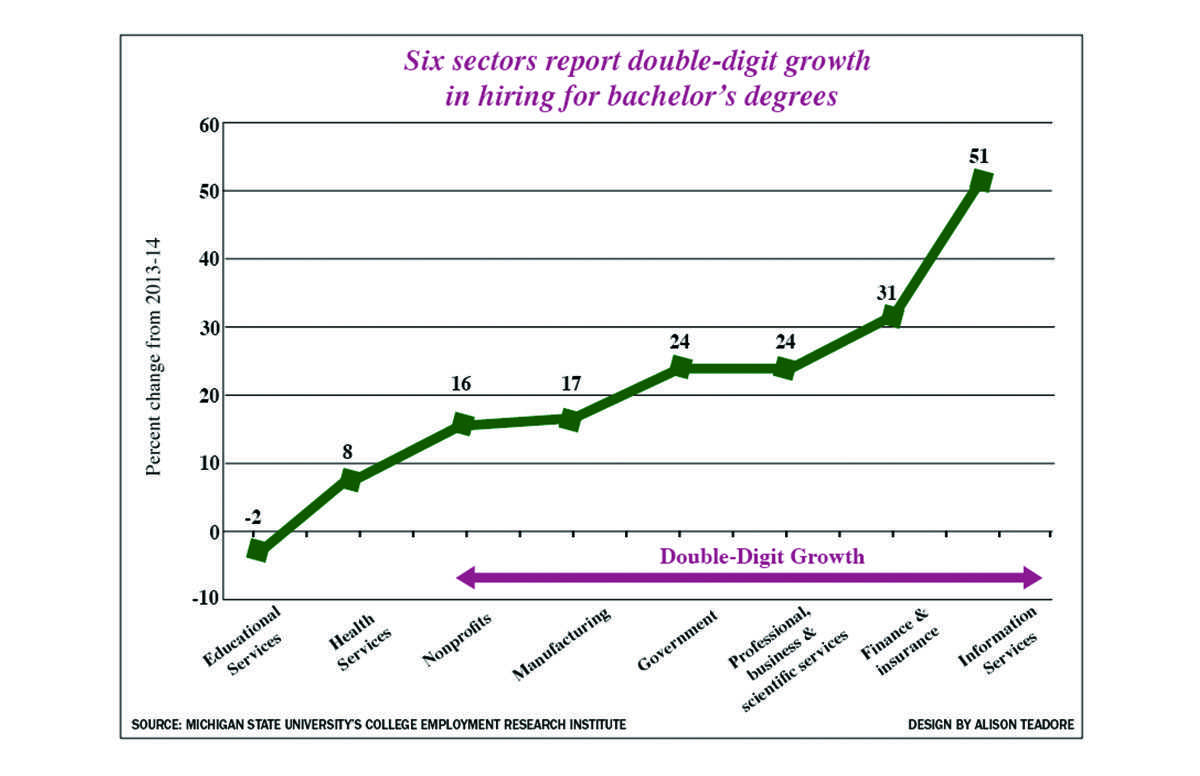 As students ready themselves for their December graduation, reports indicate that employers will be hiring 16 percent more recent graduates this year.

According to a College Employment Research Institute press release issued Oct. 7, American companies are expected to hire 16 percent more bachelor-holding applicants in May 2015.

John Fracchia, associate director of the Office of Career Services, said students graduating in December should be hopeful about their post-graduate employment opportunities.

“What I’m seeing is that there are an awful lot of entry-level opportunities available for students across the different disciplines,” he said.

Mike Cahill, director of Career Services at Syracuse University, said December graduates do have a slight advantage in the job market by graduating early. However, some students who do find jobs might have to wait until the summer to begin working in their new positions due to the hiring cycles.

“I have never seen a time where there are no opportunities out there,” Cahill said. “My recommendation for anyone who is graduating at any particular time is be a little bit aware of what the market’s like, but it really shouldn’t guide your actions that much.”

Fracchia said he has seen an increase in the number of companies that recruit students both physically and online posts for employment opportunities over the last four years. In the 2009–10 academic year, Career Services had 2,481 job postings, which jumped to 4,448 postings in the 2013–14 academic year, an increase of 55 percent, he said.

December graduates could find themselves in a frustrating position because some companies use a hiring cycle that’s focused on students who graduate in May, Fracchia said. While students graduating in December may get hired, they might have to wait until the summer to begin working, he said.

According to the National Association of Colleges and Employers Job Outlook 2015 report, employers will be hiring 8.3 percent more graduates for the whole year of 2015.

The report found that employers are primarily looking to hire applicants holding a bachelor’s degree in engineering, business and computer and information sciences. It also found that applicants with strong financial and computer science backgrounds are the most desirable to employers.

Senior Rachael Cohen, an integrated marketing communications major who will be graduating in December, said she decided to graduate early because she’s ready to work. After graduation, she will be working at Butler/Till, a media and communications agency in Rochester, New York.

“For me, it makes the most sense for me to graduate in December,” Cohen said. “Not only does it save a lot of money, but I’ve been really involved throughout my time at Ithaca College: leadership clubs, and I got to do the ICNYC program. I feel like I’ve gained a lot of knowledge, and I’m ready to start in the workplace.”

Fracchia said recruiters coming to the college are looking to hire students from a wide variety of fields. The most popular programs that recruiters look at are accounting and computer science as well as allied health professions including physical therapy; occupational therapy; and speech, language and pathology, he said. Fracchia said liberal arts students should not be discouraged because their studies can be applied to more than one field.

“It may come across as bad news for liberal arts majors, and that is not actually true,” Fracchia said. “So many postings, and people don’t realize it, are open to any major. So many things that get posted put a high value on critical thinking skills that are developed during liberal arts programs.”

Benjamin Daumas is a graduate student finishing up his masters degree in communications and said he has found the job market to be difficult to navigate because of his French citizenship and his busy schedule.

Despite these obstacles, Daumas said he will begin working as a marketing and commerce coordinator in Miami, Florida, at the end of January. He said it’s important to begin looking into the job market early on because the application process itself is very time consuming.

“Applications online take about two hours per company, so that requires a lot of prep, a lot of time, as well as preparing for interviews and customizing resumes and cover letters, so it’s extremely tiring and stressful,” Daumas said.

As some companies won’t be focusing their recruitment efforts on hiring until May, students should network to negate the potential job-hunting frustration, Fracchia said.

“Make sure that people in your lives and other professionals that you’ve built relationships with know that you’re graduating in December and that you’re ready to work,” he said.

Senior Amanda Nauseef, a music performance education and bassoon major, said she is feeling nostalgic and nervous about her impending graduation date.

While she doesn’t have a concrete idea of what she will be doing after graduation, Nauseef said she’s not overwhelmed by the job search and she’s staying positive. Currently, Nauseef is looking for teaching positions within Central New York in a conscious effort to live at home to save money until she finds a position worth the relocation, she said.

“[You have to] stay optimistic when it comes to that next step after Ithaca College,” Nauseef said. “We’re set up for great success so we just have to keep our heads up and be outgoing.”