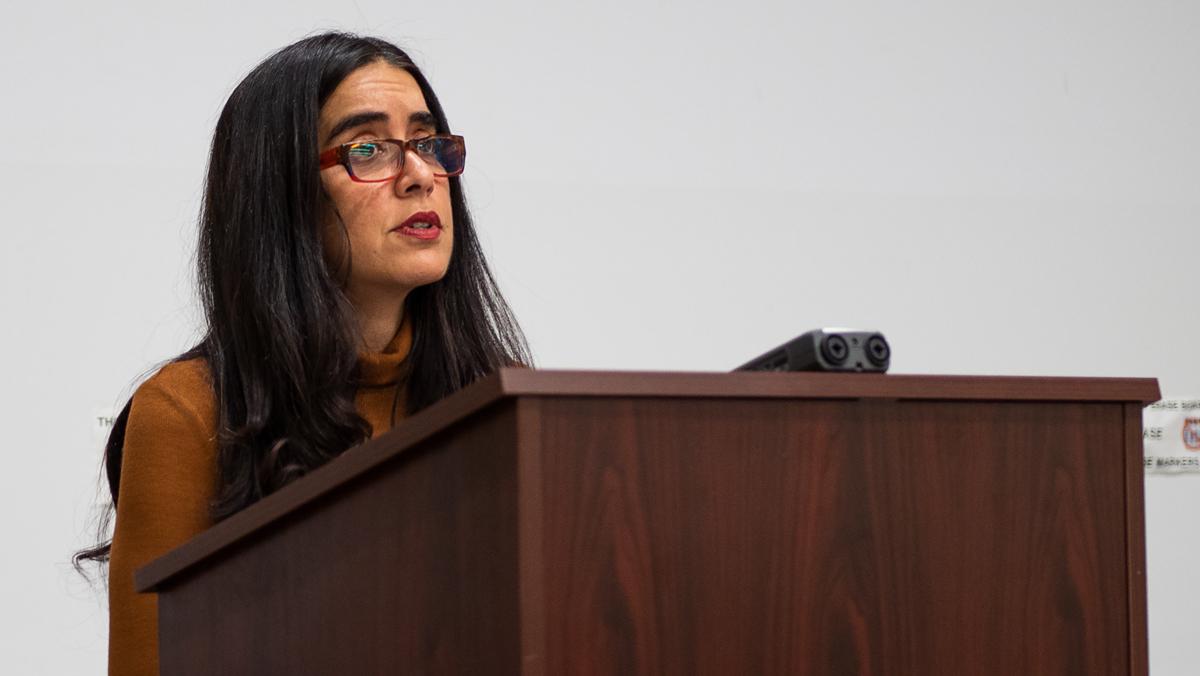 The first issue Shaikh discussed revolved around the concentration of wealth in the hands of a few individuals, which creates an inequality of coverage in the media as it reports the stories of those in power.

“Where is the media in all of this?” Shaikh said. “As we all know, nary a word was spoken about this inequality before Bernie Sanders became a prominent national figure. Only then did the media begin taking marginal note of this.”

Shaikh spoke about the Occupy Wall Street movement, which began in 2011 to fight corruption in major banks and national corporations and Wall Street’s involvement in it. The movement ignited after a small group of protesters camped out in Zuccotti Park in Manhattan, New York.

“The media maintained near-universal silence on the message being conveyed out of Zuccotti Park and often displayed only barely veiled contempt for the protestors,” she said.

The second issue she talked about dealt with the global role of the United States, especially the country’s international military presence and actions.

“The U.S. media has played an especially shameful role,” Shaikh said. “The examples are legion, but I’ll say only one of the most egregious in recent memory.”

Shaikh mentioned the strike that President Donald Trump ordered in April 2018 on Syria. It was a response to the Syrian government’s use of chemical weapons on Syrian citizens.

“A strike which was celebrated in the most extraordinary way in the media with CNN’s Fareed Zakaria declaring that Trump became president that day,” she said. “And MSNBC’s Brian Williams gushing over what he termed ‘beautiful pictures of the strike,’ quoting none other than Leonard Cohen: ‘I’m guided by the beauty of our weapons.’”

Another topic she covered was regarding the media’s extensive coverage of the death of Jamal Khashoggi, Saudi Arabian journalist and Washington Post columnist, who was allegedly murdered in 2018 at the Saudi consulate in Turkey by agents of the Saudi Arabian government and Mohammed bin Salman, the Saudi Arabian crown prince.

Khashoggi had been critical of bin Salman’s policies and went to the Saudi Arabian consulate to obtain paperwork in order to marry fiancée Hatice Cengiz. He never left.

Shaikh said the media’s coverage of Khashoggi’s death exposed the mass killing, starvation and destruction by the Saudi-led coalition in Yemen, which began in March 2015.

The conflict occurred after a failed political transition following an Arab Spring uprising. Former president Ali Abdullah Saleh was forced to hand the presidency to his deputy, Abdrabbuh Mansour Hadi, who has struggled to deal with issues like corruption and food insecurity. A Saudi-led multinational coalition intervened in the Yemeni Civil War, which has affected thousands of civilians. The condition in Yemen has been labeled a humanitarian catastrophe and is currently at a stalemate.

Saudi Arabia has been a staunch ally of the U.S. and has purchased a significant amount of weaponry from the country, Shaikh said.

“U.S. involvement, though not highlighted in the media here, has not gone unnoticed elsewhere,” Shaikh said. “But until the murder of one of its own, the U.S. media seemed not terrifically bothered by the deaths of thousands in an unjust war waged by an American ally with critical U.S. support.”

The final concern she discussed was the media’s role in election coverage. Shaikh said that during the 2016 presidential election, the media paid more attention to President Trump than to candidates Hillary Clinton and Bernie Sanders.

“The Tyndall Report analyzed major network campaign coverage in 2015,” she said. “The report found that in over 1,000 minutes of national broadcast television airtime devoted to all the campaigns, Trump received 327 minutes while Bernie Sanders was granted all of 20 minutes. Hillary Clinton got a total of 121 minutes. That’s six times the amount Sanders received but still much less than what Trump received.”

Shaikh said that for the 2020 presidential election, media companies are already anticipating massive profits through advertising.

Freshman Kyle Friedman, who attended the event, said he found the information insightful.

“I’ve never heard of “Democracy Now!” before this,” Friedman said. “This is all so new to me, but it was really inspirational to see how many people were here.”

Freshman Makiyah Adams said she thought Shaikh had a lot of knowledge.

“I like the way she handled a variety of questions that were asked,” Adams said. “There were definitely a lot of curveballs. I think she’s very professional, but she still gave us information. This was a really good introduction to ‘Democracy Now!’”