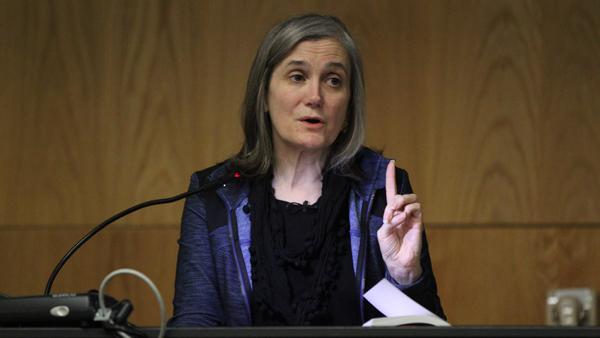 Emily Fedor/The Ithacan
Amy Goodman, co-host of Democracy Now! and one of the first recipients of the Izzy Award, visited campus Sunday evening and addressed a packed Park Auditorium about the need for independent media. This year, Mother Jones, a nonprofit news organization, will receive the Izzy Award on April 17.
By Jeremy Li — Staff Writer
Published: March 28, 2013

With the presentation of this year’s Izzy Award around the corner, Amy Goodman, founder and executive producer of Democracy Now! and one of the first recipients of the Izzy Award, visited campus Sunday to speak about the importance of independent media and the need for journalists to truly act as the Fourth Estate to a packed audience Sunday.

Goodman is a co-host of Democracy Now!, an independent national daily news program. Her public lecture was held in the Park Auditorium on Sunday night, and about 300 students and community members attended the event. Four overflow rooms were set up in Textor Hall lecture halls and classrooms in the Park School with live feeds of the speech. A book signing immediately followed the talk.

Goodman had been the news director of independent Pacifica Radio station WBAI in New York City for more than a decade before she co-founded Democracy Now! The War and Peace Report in 1996. Goodman credits mainstream media organizations with the program’s success, because they left a niche for independent media.

The Izzy Award, which is presented annually to significant members of independent media, is named after journalist I.F. Stone, who in his time revealed government deception, McCarthyism and racial bigotry.

Mother Jones, a nonprofit news organization recognized for its investigative reports throughout 2012, is the recipient of the Izzy Award this year.

Jeff Cohen, director of the Park Center for Independent Media, said one reason the award is going to Mother Jones this year is for exposing a video of Mitt Romney at a fundraising event describing 47 percent of the electorate as people “who are dependent upon government, who believe that they are victims.”

The award will be given to Mother Jones on April 17.

Goodman began by talking about the journalism values focused on in her books. She said media and journalism are essential to a successful, functioning democratic society.

“Media can be the greatest force for peace on earth,” Goodman said. “Instead, it is wielded as a weapon, and that has to be changed,” Goodman said. “That is a violation to our sacred duty as journalists, our job is to go to where the silence is. Our job is to be the check and balance on power.”

In her speech, Goodman shared a few personal experiences of covering protests and giving voices to the silenced. She first talked about Democracy Now!’s recent program on the story of Iraqi War veteran Tomas Young, who has been paralyzed for nine years and wants to end his own life. She used this example to demonstrate what it means to be patriotic as a citizen.

“On this 10th anniversary [of the Iraqi War], we have to give voice to those who are not usually heard,” Goodman said. “And in this country now, it’s the hundreds of thousands of veterans who have come home, who have not been treated by the [U.S. Department of Veteran Affairs], who are waiting one or two years for treatment, that is our responsibility as well. I think that, today, is what it means to be patriotic.”

She also shared her story of dealing with violent police officers while covering the protest of Troy Davis’s execution in Atlanta, Ga., in 2011. Goodman used the story of Rosa Parks, an African-American civil rights activist who refused to give up her seat to a white person on a bus in 1955 before the famous Montgomery Bus Boycott, to demonstrate the importance of perseverance in social activism.

“You never know when that magic moment would come,” Goodman said. “But if you are involved in social change, you will help to build a foundation that will make history, that can determine the future.”

“Anyone who hears the stories has to realize what courage it takes to be a journalist, to do something as simple as she described,” Rochon said.

As a final note of the lecture, Goodman encouraged her audiences to rethink their roles in society.

“We have a decision to make every day and that is whether to represent the sword or the shield,” Goodman said.

Freshman Rafael Gilbert said he had a clearer vision of traditional media after hearing Goodman’s lecture.

“If you want to be lied to, turn on the TV,” Gilbert said. “You turn on Fox News at 10 o’clock at night, you hear about the liquor store getting robbed, about some kids getting pickpocketed, we are not hearing about what’s actually happening in the world and how people are trying to change the world we are living in.”

Freshman Erica Steinhoff said she felt the need to reevaluate her perception of journalism, war and the state of the world as a whole after listening to Goodman’s speech.

“It made me rethink how I view the world and my view of how I can change the world positively,” Steinhoff said.